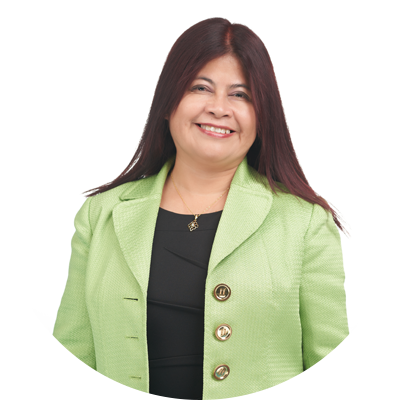 When Yesenia Peck focuses on “diversity” she shines a light on everyone.

Peck, diversity and inclusion manager at Nebraska Public Power District (NPPD), says the organization is striving to “put ourselves in everyone’s shoes”—a philosophy grounded in Peck’s own penchant for others.

Formerly of Lima, Peru, where she served as an attorney in the Supreme and Superior Courts, Peck is an advocate for good across Nebraska. She is president of the board of the Nebraska Hispanic Chamber of Commerce and has served the organization as a volunteer for more than 17 years.

“I consider myself a servant leader,” Peck says. “Nebraska is home for me, and every organization I serve has meaning for me.”

According to the U.S. Census, more than 12 percent of Nebraska’s population is Hispanic/Latino*. This makes the Hispanic/Latino population the second-largest demographic in the state—and one of the fastest-growing in Nebraska.

For Peck, however, diversity is achieved through inclusion, and her work with NPPD and the Nebraska Hispanic Chamber of Commerce has many synergies.

This “all-together” attitude is part of the reason Peck is also finding success as the chair of the Nebraska Commission on Latino-Americans. Appointed by Nebraska Governor Pete Ricketts, Peck is in the second year of her term.

With a vision to “empower the Hispanic/Latino Community through a proactive approach to issues that affect their access to education and social, political and economic opportunities in Nebraska,” the Nebraska Commission on Latino-Americans endeavors to ensure a link between state government and Nebraska’s Hispanic/Latino population.

According to Pew Research, the Nebraska Hispanic/ Latino population, nearly 200,000 people strong, is the 20th largest of any state in the U.S.—and continues to grow—producing a momentum positively reflected as an expansion to business and communities.

Case in point: In Nebraska, according to the Small Business Administration, 4.8 percent of businesses are owned by people identifying as Hispanic/ Latino. This accounts for more than 8,100 organizations statewide.

“Let’s keep working on learning about everyone,” Peck says. “Let’s put aside whatever divides us. Let’s put ourselves aside and let’s go for business. Let’s give a chance to the person that is different from us.”

While Peck acknowledges “success is different for everyone,” she recognizes access and opportunity for all can increase success, regardless of an individual’s background. An attitude of selflessness and celebration can propel organizations—and organizations that uplift and empower employees also empower communities.

“Workplaces are formed by people,” Peck says. “If we incorporate training and celebration—and work together—we can embrace our diverse workforce in Nebraska.”

One of the strategies for an effective diversity plan is to be intentional, Peck says, and intentionality includes continuous learning—something Peck had to embrace when she moved to the United States.

“Imagine my surprise when I came to the U.S. and found out I was no longer an attorney,” she says. Undeterred by this discovery, Peck earned her M.A. from Bellevue University, then a doctorate from St. Thomas University. She is now planning to pursue law school.

“There is not one specific formula for success,” Peck says. “Challenges never end. Opportunities never end. We need to try to put ourselves in everyone’s shoes.”

*This article uses the term “Hispanic/Latino” in alignment with the U.S. Census Bureau. The writer of this article understands each of us has a voice in how we describe ourselves and our origins. Not all voices align with U.S. Census Bureau descriptions. Pew Research offers additional insight into how Americans view their identity as reported by the U.S Census Bureau. The report: “Black and Hispanic Americans See Their Origins as Central to Who They Are, Less So for White Adults: About half of Americans see their identity reflected very well in census race and ethnicity questions” (March 14, 2021).