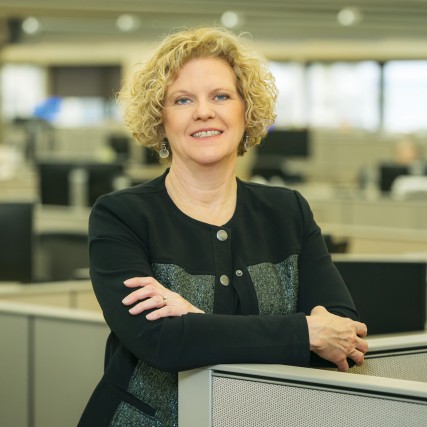 Omaha native Cate Folsom started at the Omaha World-Herald when there weren’t many women on staff and men dominated most editorial positions. Surprisingly though, not much progress has been made since the early 1980s: Women still make up just slightly more than one-third of all journalists working full-time for U.S. news media. Folsom is part of that group, and has been for more than 35 years.

A graduate of the University of Nebraska Omaha, double majoring in English literature and journalism, Folsom set her sights on a job at the Omaha World-Herald.

“I figured I’d stay a couple of years and move on and here I am – still there,” Folsom says.

Folsom’s started in women’s news, where she helped write for the society column. Fast-forward over three decades, and she has served in nearly every role on the city desk and other various roles throughout her tenure, including a stint at the Washington Bureau. Today, she is the editorial page editor.

There’s no doubt that Folsom is driven, but support from colleagues and mentors, along with the right opportunities, have helped get her to where she is today.

“Even in my time, editors have been fairly supportive of women,” Folsom says. “I moved from the news copy desk to the Washington Bureau because our managing editor saw something in me that I sure didn’t at that point.”

Whether writing or editing an editorial, looking over the public pulse and syndicated columns or catching up on news and meetings, Folsom doesn’t skip a beat. Literally. Over the years she has worked with nearly every local or regional news reporting beat.

But, like many working women, one beat that has posed a bit of a challenge throughout her career is that of work-life balance.

“That’s when I had children at home…I think a lot of working moms feel this, but when you don’t get home until 7:30 or 8:30 p.m. at night, you really do feel guilty,” Folsom says, looking back on the days when she worked in other positions. “Like you’re not giving your family enough and then when you’re not at work you feel you’re not giving your work life enough.”

With her kids now grown, the juggle is easier. These days, Folsom’s favorite part about her job is when the paper is able to make a difference or influence action or public views on issues.

“We feel we have the most influence in the local arena, rather the national arena, so that’s exciting when you can write something and can see change in result of it,” Folsom says.

“There were quite a few people who were upset, and we invited people to communicate with us, and they did. Most people emailed us with their feelings. Some people called,” Folsom says. “I think we probably would have gotten the same thing had we gone the other direction.”

While everyone holds their own political opinion, Folsom’s advice is universal for women of all ages: Embrace opportunities and challenge yourself.

“Other people might see things in you that you don’t recognize…that’s where real growth comes in- When you put yourself in an uncomfortable position and see how it goes,” she says.

Folsom has taken her own advice when it comes to embracing opportunities over the years, particularly with the release of her recent book, Smoke the Donkey: A Marine’s Unlikely Friend, published last April. The story of friendship takes place in war-torn Iraq.

With her continued work with words, you might call Folsom a certified wordsmith. Or you could call her Cate Folsom, editorial page editor at the Omaha World-Herald. W