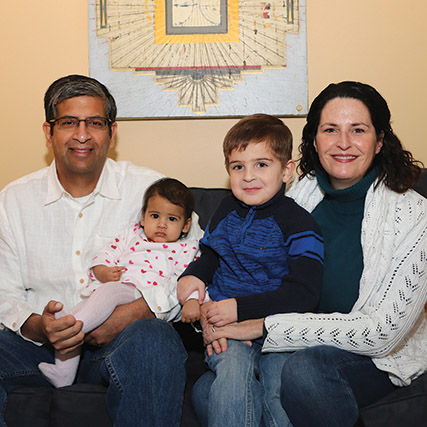 Guaranteeing Access Would Provide a Safety Net for Nebraska Families

From left to right:
Rashid, Gretchen, Abraham and Cary Mohuiddin

The year 2012 started off well for Rashid and Cary Mohiuddin. The couple had welcomed their first child, Abraham, a few months before. They had just moved into a beautiful new home, and the two of them were enjoying fulfilling careers.

“We were excited to be starting the next chapter of our lives together. Our future looked bright,” Cary Mohiuddin says.

But their bright future changed overnight into what Mohiuddin still refers to as “a nightmare.” Her husband’s common strep throat infection transformed into a life-threatening case of sepsis, leading to two months in four different hospitals, kidney failure and life support. He coded several times. He lost portions of his hands and feet. Once finally discharged, he needed daily in-home nursing visits for a period, and he has endured more than 30 surgeries to date.

“I was the primary caregiver for both my infant son and my recovering husband. I was charged with the task of managing the nurse visits and making sure he was receiving the proper treatment. It was critical that I was 100 percent available to be there for my husband’s health care needs,” Mohiuddin says. “I was his only legal advocate.”

Despite everything, she considers herself lucky to still have her job today, which also continues to provide the family’s health insurance. And with the support they needed to get through the crisis, life has moved forward for the Mohiuddins: Rashid was eventually able to return to work and the family welcomed baby Gretchen in 2015.

“Unexpected life challenges can happen to anyone,” Mohiuddin said in testimony last fall before the Nebraska Legislature’s Business and Labor Committee. The hearing was held as part of an interim study on a state paid family leave program introduced by State Sen. Sue Crawford of District 45 (Bellevue). “I am incredibly fortunate to have an employer (Collective for Youth) that has continuously worked with me to come up with creative solutions in order to keep my salary coming and the insurance benefits intact. They allowed me the time I needed to be present for my husband’s ongoing health care needs.”

In the future—regardless of what their employers elect to offer or not offer—Nebraskans may be able to access paid family and medical leave benefits through a state program.

“I intend to introduce a bill that provides a state model for paid family leave in the Legislature next session,” Crawford says. “Most importantly, it would allow family members to take time with loved ones in the instance of a birth or an adoption, or a serious illness of someone else in the family. However, it would also allow employees time to take care of themselves if they have a serious illness.”

Aubrey Mancuso, executive director for Voices for Children in Nebraska, said one common misconception regarding family and medical leave is a belief that federal law established through the Family and Medical Leave Act (FMLA) applies to everyone.

“I think people think this is something that everyone has access to, but that’s just not the case. Only businesses of 50 or more employees are actually subject to FMLA law, so in a place like Nebraska where a lot of people work for small businesses, not everyone has access to even unpaid family and medical leave,” Mancuso says. “Even if people do have access to this unpaid leave, their financial circumstances don’t always allow for them to really take it. So that creates some serious gaps in the actual availability of family and medical leave.”

Three states have found a way to fill in some of those gaps. California, New Jersey and Rhode Island offer paid family and medical leave that is funded through employee-paid payroll taxes. “The other states that have passed these policies are states that already had a state temporary disability policy, so they were able to build on that policy. As far as I know, we have not yet had a state that did not previously have state temporary disability take this step yet,” Crawford said. “So one question is whether or not this is a policy we can tackle at the state level. If it hasn’t happened at the federal level—and it may not happen soon at the federal level—can we take heed to tackle it at the state level?”

Mancuso believes it’s a realistic possibility. A national study estimated that the cost for a state-funded paid leave program similar to the three existing state programs would be approximately $1.50 per employee per week. This estimate is based on participation of Nebraska businesses with four or more employees and an opt-in for self-employed individuals, Mancuso says.

“State law would establish a baseline where everybody has some sort of access to paid leave,” she says. “But employers could restructure their benefit plans to be more generous.”
Short-term disability insurance and paid sick leave or family leave benefits that are already electively offered by individual employers are more likely to be available only to established workers in full-time, salaried and/or higher-compensated positions. Part-time, hourly and newer workers are not commonly eligible.

“While we don’t have statistics on Nebraska, nationally only 12 percent of employers offer paid leave,” Mancuso says.

“I have taught public policy classes at Creighton for 20 years, and in those classes, when we get to family policy it’s always striking to students when they learn that almost every other country in the world finds a way to make sure that mothers are able to spend time with their infants after a birth or adoption. And I think it’s no coincidence that our percentage of women in leadership positions in business and government is lower than many of our developed-country peers,” Crawford says.

“I think the investment in ensuring that women are able to take the time they need away from work in a birth or adoption and then get back to work is a very critical piece that allows women to succeed, and it’s a piece that’s missing in our public policy now.”

Mancuso agrees that current policies have consequences. “In 2014, through a grant from the Women’s Fund, we were doing focus groups on barriers to economic opportunity for lower-income women, and one of the issues that came out during that focus group is that there are lower-income women who actually quit their jobs to go on public benefits, to use that as a way of having some income during their maternity leave,” Mancuso says. “These types of things are really counter-productive for our workforce, for these families, and it shouldn’t have to be that way.”

Women are affected in other ways, too.

“I was first drawn to the issue (of family and medical leave) in terms of maternity leave and the importance for the mothers and the health of the babies, but taking leave is much broader than just the ability to take time in the event of birth or adoption,” Crawford says. “Women also tend to be the ones who take time when an elderly parent needs care or when a child is in a tragic accident and needs intensive time with a family caregiver, and paid family leave covers those kinds of incidents as well, for women and men. It recognizes the importance of intentionally supporting families and family caregiving.”

Without that support, families may have to make drastic decisions.

“We asked the Department of Labor to give us data on the reasons people apply for unemployment. When someone applies for unemployment, they need to tell the reason they left their previous job. And when we analyzed that data, we found that 20 percent of people left jobs and went on unemployment for reasons related to family care and self-care kinds of issues,” Crawford said. “It’s very important to recognize that it’s not necessarily the case that all of those situations could have been handled with paid family leave, but I imagine many could. And that 20 percent of people applying for unemployment is likely to be the tip of the iceberg, because I suspect that often when someone drops out of work to care for themselves or a family member, they may not apply for unemployment. So I think the number of workers falling out of the workforce to care for a family member is much larger than people suspect.”

Mohiuddin pointed out that employers would also benefit from a paid leave program.

“By supporting full-time employees with paid leave, you have a much higher rate of employee retention and loyalty,” she says. “By allowing the employee to focus on their medical situation, you are more likely to get a higher return on productivity when they are back at work.”

Crawford agrees. “I hear from business leaders that they worry about how they will manage if a valued employee takes paid family leave. However, this view ignores the fact that when a family crisis hits, a valued employee who cannot take leave may feel the need to quit. In that case, they not only have to manage without that valued employee, but they have the added costs of recruiting and replacing that employee. If the employee does manage to find a way to come to work, at the cost of their own health, or at the painful price of leaving a child alone in the hospital, that employee will be back at work distracted and resentful,” she says. “We know from the research that if the employee can take time off in those situations, they will come back more productive and more loyal to the employer.” W

On Feb. 1, the business and labor committee heard testimony regarding LB 850, with nine individuals testifying in support of the legislation, including two women who shared their personal stories regarding work-family balance. One of these women, Sofia Jawed-Wessel, Ph.D., also presented public health research in support of paid family leave. Organizations testifying in support of the bill included Women’s Fund of Omaha, Nebraska Appleseed, Voices for Children, Holland Children’s Movement and Nebraska AARP. Business groups opposing the legislation focused mostly on how it might impact smaller businesses.

To learn more about SEPSIS and how to know the signs please go to www.sepsis.org