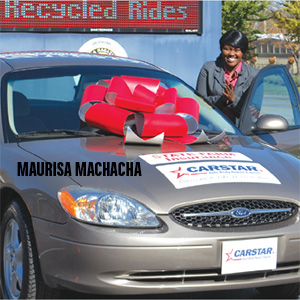 A client in Goodwill Industries’ Partnership for Youth program was the recipient of a “Recycled Rides” Ford Taurus awarded at the Women’s Fund of Omaha’s Annual Fall Luncheon in October.

The car went to Maurisa Machacha, a 20-year-old self-supporting young woman who has overcome major obstacles as she pursues her goals. Nonprofit agencies in the metro area nominated women they felt would benefit from having a vehicle, and a Women’s Fund committee selected Machacha as the recipient.

Machacha arrived in Omaha in December 2012 after being separated from her family. “I used to live in Canada,” she says. “Actually I lived there with my family. Due to some immigration problems, we weren’t able to get status up there.”

Two days before her 19th birthday, Machacha was taken to the border in New York. The rest of her family was sent home to Botswana, Africa. “I didn’t even have a chance to say good-bye,” she recalls.

Since she was born in Nebraska, authorities in New York provided her with transportation to Omaha. “I didn’t know a soul,” says Machacha, who had not lived in Nebraska since she was a young child. “On my birthday, I remember not knowing what I was going to do about anything in my life.”

Machacha stayed in a shelter, found a job and joined Partnership for Youth, where she takes part in a work experience program.

“I remember what my mom said. She said no matter what happens, just keep your head up and be strong and I knew that she always looked at me to always be optimistic,” she says. “So I just put down some key points of what I had to do to get myself together and slowly started doing it.”

Machacha is enrolled in an independent studies program to earn her high-school diploma. “I only have about four credits left to finish up,” she says. “I am going to sweep through them as fast as possible.”

She juggles studies with her six-day-a-week job as a room attendant at Embassy Suites, relying on the bus for transportation. It can take up to an hour-and-a-half to get from work to school, which cuts down on the time she can spend in class.

A car will make it easier for Machacha as she pursues her dreams. “I will be able to go to work and to go to school and to finish school faster,” she says. Once she has her high-school diploma, she plans to attend college.

“Goodwill is extremely proud of Maurisa for earning this honor,” says Frank McGree, Goodwill Omaha’s president and CEO. “Her hard work and perseverance serve as an inspiration to anyone trying to overcome barriers in their life. She is an example of what is possible when you never give up. She has overcome so much in her time with the Goodwill Partnership program, from housing issues to employment barriers. We are proud to share in her story, and we can’t wait to see what she’ll do next.”

This is the fifth year the Women’s Fund of Omaha has presented keys to a vehicle at its fall luncheon. Recycled Rides is a community service program of the National Auto Body Council, where body shops repair and donate recycled vehicles to families in need.

The Ford Taurus was donated by State Farm Insurance and refurbished and repaired by Northwest CARSTAR Body Shop. Technicians at the shop volunteered their skills. “State Farm offered us this salvaged Taurus that was low mileage and in great condition,” says Greg Petersen, Northwest CARSTAR co-owner. “Our technicians really enjoy giving back to the community by repairing the car.”