Food Bank for the Heartland 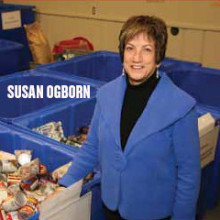 Helping More Than 25,000 People Stretch Their Food Budgets Every Week

When local families fall short at the end of the month and visit a food pantry to make ends meet, they are likely relying on the Food Bank of the Heartland without knowing it. Pantries and meal providers in Nebraska and western Iowa help more than 25,000 people to stretch their food budgets in any given week. “There are hundreds of pantries, but only two food banks in Nebraska,” says Susan Ogborn, president and CEO of Food Bank for the Heartland (FBFH). The difference is that food banks are more like distribution warehouses. “The theory behind food banking is that only one place in the community should have to spend money on racking, trucks, diesel fuel, pallet walkers and fork lifts,” Ogborn explains. “And then pantries can spend their energy and their efforts on serving clients.”

There are two types of pantries—the traditional pantry offers a pre-packed sack/box or the choice pantry, which gives people the opportunity to pick the food that they need and want. “We are really doing all that we can to encourage choice pantries because there’s a lot less waste of food, and it’s so much more respectful,” Ogborn says. “We do a lot of training with our pantry partners on what it feels like to be on the other side of the line,” she adds. “Nobody wants to stand in line and be embarrassed asking for food if they don’t need it. So we talk about what respect is and how it plays out and who hungry people are.”

Agency and mobile pantry partners pay a handling fee ranging from zero to 16 cents per pound of food, depending on which products they choose to provide. “We don’t turn community organizers away. If they can’t pay the fee, we will help them to raise the funds,” Ogborn says. “Your community wants to feed your people and we want to help you.” The fee doesn’t completely cover the costs but creates a partnership in addressing hunger rather than charity, she adds.

“A lot of people think we are a government agency. We’re not,” Ogborn says. FBFH is a nonprofit organization. “All of our funds are from independent donors.” There is, however, collaboration. FBFH, along with the Food Bank of Lincoln, helps to identify and sign up eligible households for Supplemental Nutrition Assistance Program (SNAP) benefits. “We processed a total of 4,249 new applications in 2014. This is the number I’m most proud of,” Ogborn says. “We put almost $10 million of grocery buying power into the state of Nebraska because of the people we signed up for SNAP.” This equates into big economic development in small towns, she adds. “That’s a lot of buying power that they wouldn’t have had otherwise.”

To specifically serve children, FBFH coordinates with multiple community organizations to provide hot meals to children from low-income families in 14 after-school care program sites and in various locations during the summer months. These programs are called Kids Café and Kids Cruisin’ Kitchen. And FBFH’s BackPack Program helps to keep children from going hungry over the weekends. Teachers and counselors in 228 schools across Nebraska and western Iowa identify 8,300 children in need and confidentially slip bags of food into their backpacks every Friday. “We get feedback from parents on how much it means to them to be comfortable knowing that their kids have food that is healthy over the weekend if they have to work and aren’t able to cook for them,” Ogborn says.

According to Ogborn, one of the organization’s core challenges is to measure its success. “We are distributing more and more pounds of food every year, and that has been a traditional way of measuring how a food bank is doing. We now know that is an activity measure—not an impact measure.” Measuring impact would mean identifying how many people have become self-sufficient because they had emergency food for six months, but don’t need it anymore. Three area pantries are attempting to track effectiveness with a shared database, but it’s only in its second year, Ogborn says. “The numbers are leveling off at a new high, but they aren’t going down,” she adds. “Our vision is to eliminate hunger. Our goal is to put ourselves out of business.” It doesn’t look like that’s going to happen in the next year or two, so the Food Bank for the Heartland will continue to fill that gap. “We work with a sense of urgency but not panic,” Ogborn says. “Everything we do is to serve somebody else.”