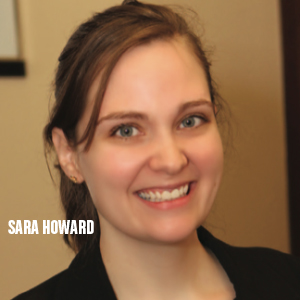 Senator Sara Howard’s political career began in 2012, when she decided to give back to a community that carried her family through a difficult time. “For me, running for office wasn’t about a single issue, but has been a byproduct of living in a grateful manner,” she says. Howard succeeded her mother, Gwen Howard, who served at the Nebraska Unicameral Legislature, District No. 9, for eight years following a 34-year career in social work.

Senator Sara Howard attended Loyola University Chicago School of Law and took a job at the Illinois Maternal and Child Health Coalition upon graduation. But a month into her new position, in March of 2009, Howard’s older sister passed away suddenly. “It took me about a year to be able to move home,” Howard says. “So it was the folks in my district that really took care of my mom when I couldn’t be there.” Howard’s father died in a car accident in 1981, a few months before she was born.

For Howard, the campaign trail was a positive opportunity to connect with people who knew the challenges her family faced. “When I was campaigning, I was going to houses where I attended slumber parties in their basement, or I babysat their kids or they were my kindergarten teacher,” Howard says of her constituents. “I’m very lucky because I grew up in my district.” She works to continue those connections by attending neighborhood association meetings and checking in on people to see how they are doing.

Howard also works at building and maintaining positive relationships with colleagues in the legislature. “In politics it’s easy to forget that we are dealing with other human beings with lives, hopes, dreams and beliefs that don’t have to mirror ours,” she says. “The hope is that we are all looking in the same direction to improve the quality of life for the people in our districts and in our state.” An honest, direct approach has served her well on the legislative floor, she says.

Besides her role as senator, Howard serves as development specialist for One-World Community Health Centers. In law school she earned specialty certificates in tax law and child/family law. Her aspirations were not initially political. “If you had told me in college that I’d be a legislator, I would have laughed,” she says. Like many other women, Howard did not plot a course for a career in politics. “We’re not road mapping ourselves into politics,” she says of women in general, “and when we do it’s almost a surprise.” She’s noticed a trend that women are often pushed into public office because they are angry about something and seeking a solution rather than intentionally tracking toward a political career.

Howard says she aims to change that by encouraging one woman at a time to put the idea of a career in politics in the same realm of options as medicine or law. “I’m always asking other women if they’ve considered running for office,” Howard says. As for her own future, she hopes to serve a second term in the legislature.

one of her constituents

I like Senator Howard personally but do not agree with some of her positions.
Objectively speaking, she is one of the leading liberal/progressives in Nebraska. While that is fine, I appreciate many liberal views, she is too often seen as the friendly, sweet-little innocent girl next door. I don’t think that’s fair to Senator Howard. I think people should realize that she is her own woman (not in her mom’s shadow) and while she is charming in person she certainly holds views and a political agenda that many may be somewhat alarmed over. Her priorities are: gay marriage, gay adoption, greater government involvement in schools and in nearly every part of our lives, supporter of abortion on demand, Obamacare, etc.