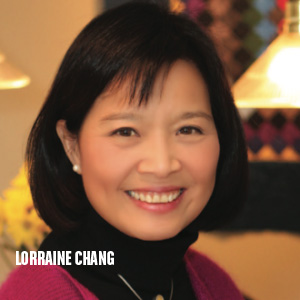 Lorraine Chang, chairperson for the Learning Community Coordinating Council, attended the Omaha Women’s Fund Ready to Run workshop in 2007 with no intent to run for public office. “At other Ready to Run workshops, I had been there as someone who was trying to encourage other people to run,” Chang says. But as she listened to Kathy Bradley, a Westside School Board member, talk about the Learning Community, Chang found herself starting a pros and cons list to run for her area. “My interest was sparked so intuitively — it was such an interesting moment,” Chang recalls.

She considered whether or not her background was well-suited to the role. “I felt that my work in the public and private sectors and my focus on change and collaboration was something that could be useful in launching this new initiative,” Chang says. “In 2008 when I decided to run, all we had was the legislation, which was unclear in implementation, but very clear in vision.”

Her husband asked her a pivotal question: “What if you lose?” Her answer was that it would still be worth it. Chang’s passion for the importance of public education was so strong that she was willing to put in the time and effort to knock on doors and educate people about how the Learning Community envisioned helping children in poverty, regardless of whether or not she actually took office, she says. “That made the campaigning a lot easier for me because it wasn’t about me. It was about trying to make people understand that this is important.” Chang won her second term in 2010, continuing to represent Achievement Subcouncil No. 3, which includes the Westside and Ralston districts and the midtown area of Omaha Public Schools.

“Public service and working for the public good was ingrained in me early on and it just felt right,” Chang says. Both of her grandfathers were public officials and her mother worked for the United Nations. Chang’s chosen career path after college and law school was focused on public interest issues and environmental law, but her willingness to be open to new experiences provided her with a broad spectrum of opportunities, both in business and in public service areas throughout her 30-year career. “It’s all about building long-lasting relationships and being open to learning new things,” Chang repeats continuously as she describes her professional journey. “You become a product of your experiences, but your experiences are shaped by what you’re drawn to.”

Chang’s service to nonprofit boards and active support of candidates such as Peter Hoagland, Brenda Council and Nancy Thompson in other elections helped to alleviate the fears she confronted in her own campaign. “One of the challenges that I faced was asking for money,” she says. “It’s a tough thing to do.” But she was pleasantly surprised by how many good relationships she had formed over the years and the positive response she received. “Courage,” Chang says, “is overcoming your fears based on what you believe and following your heart, knowing that what you’re doing is the right thing for you.” This philosophy has served her well.