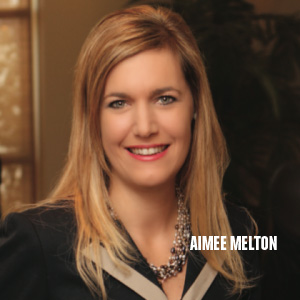 Omaha City Councilwoman Aimee Melton launched her campaign to represent District No. 7 after a failed attempt to convince her dad, who was retiring from Valmont Industries, to run. “Our family sits around and talks about politics at the kitchen table and the Thanksgiving table,” she says. “I said, ‘Dad you’ll be great. I’ll be your campaign manager,’ and he looked at me and said, ‘I’m retiring, and we need a young, strong, female candidate because if Jean Stothert is elected mayor, we won’t have a female on city council.’” That conversation ended with Melton deciding to throw her hat into the ring with her father, Tom Sanderson, by her side as campaign manager and her sister, Theresa Thibodeau, heading up her fundraising efforts.

But Melton says the first step was to talk to her husband, children and law partners. “They were all very supportive.” The next logical step was to ask the question, “Am I electable?” She met with Chuck and Liz Sigerson and a few other key possible supporters for input. The response was favorable. Sigerson had served as the District No. 7 representative previously, but had to leave office due to health problems. Tom Mulligan was appointed to finish his term. “The majority of the people in my district were very upset. They didn’t feel that Tom Mulligan was representing their interests,” Melton says. “And he just wasn’t Chuck Sigerson. Everyone loved Chuck Sigerson. People still ask me how he’s doing.”

Melton’s grass roots campaign hit the ground running. She announced her decision to run in January 2013, with only three months to campaign before the April primary, followed by the May election. “When I didn’t know what to do, I just went around and asked people for money. You know you have to do that,” she laughs. She and her dad used maps from the election commission to strategize where the voters were, and Melton started walking. “I ended up knocking on over 4,000 doors,” she says. “If you’re going to run for city council, you have to get out and meet the people.”

Political activism sparked early for Melton. She recalls her dad gave her a T-shirt when she was 6 years old that read, “I’m going to be president” on the front and “…as soon as I’m allowed to cross the street” on the back. Her parents always told her that she could be and do anything she wanted and that if she wanted to be the first female president, it was possible. In high school, an elective class that detailed the history of political parties and ideologies impacted Melton’s political aspirations tremendously. By junior year, her course was plotted to major in political science and then continue on to law school.

“I never quit my goals. But sometimes you just have to extend the time in which you’re going to reach them,” she says. Melton worked even years as a manager for Eddie Bauer between her undergraduate years at the University of Nebraska-Lincoln and when she started law school. “I always had the goal to go to law school, but I felt that I should work to put my husband through school for his chiropractic degree first and then I would go,” she says. But her marriage to her high school sweetheart ended before she made it back. Now a single parent working two jobs, Melton moved to Omaha to be near her family. She was determined to realize her goal. First, she finished the 12 credit hours she needed to complete her bachelor’s degree in political science at the University of Nebraska at Omaha. Then she attended Creighton University School of Law, where she graduated with a Juris Doctor in 2004.

How did she do it as a single parent with two small children? “I have a wonderful mother,” she beams. Her mom provided day care for Melton’s two boys, Jake and Tommy. They are now 20 and 13. “It was hard, but I think you need to teach your children that sometimes things are hard, but we can get through them together.” Melton didn’t want to work the grueling hours required of a new associate in a large firm that would steal more time away from her kids, so she sought a position as a Deputy Douglas County Attorney in the Domestic Violence Unit. “I was now making less than I did as a retail manager at Eddie Bauer,” she laughs, “but that’s what I wanted to do and I loved it!” It was a great opportunity for her to gain extensive trial experience straight out of law school and still be available to her family. “It’s an ideal situation for experience and family balance,” Melton adds. In 2008, she left the prosecutor’s office to enter private practice and transitioned to managing partner of Reagan, Melton & Delaney, LLP two years later.

Melton met her husband, Scott, while in Law School at Creighton. They married and have a six-year-old son, Jimmy, together. Further political aspirations — beyond a hopeful second term on city council — will be on hold until after Jimmy graduates high school, Melton says.

Aimee is a wonderful person who is holds true the values many Omahans share.