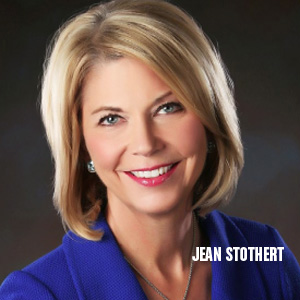 Omaha’s 2013 mayoral race drew national attention, highlighting Jean Stothert’s election as the city’s first female mayor and her graceful deflection of the vulgar attacks launched at her during the campaign. “I had to be very careful how I handled that,” Stothert says. “I didn’t attack back because I wanted to concentrate on my abilities and I wanted to keep focused on my vision and continue to tell people why they should vote for me. I didn’t want to tell them why not to vote for my opponent.” She considered those attacks a minor distraction and continued to move forward with her vision for Omaha.

Before running for mayor, Stothert served on the Omaha City Council. “Never in my wildest dreams did I think four years later I’d be mayor,” she says of her 2009 election. Prior to her stint on the council, she served on the Millard Board of Education for 11 years.

Stothert’s background is in critical care nursing. Prior to moving to Omaha 20 years ago for her husband’s job, she was head nurse and then department head of cardiovascular surgery at St. Louis University. Their children were young, so she decided not to take another ICU position.

“I feel strongly that we all have a civic responsibility to give back to the community one way or another,” Stothert says, “and I knew there would be something calling my name.” She got involved in the Millard School District. “I loved school board, but I did everything I could possibly do, so it was time to let somebody else have a turn,” she says. City council was a logical next step, as it’s similar to the function and responsibility of a school board.

She unsuccessfully ran for Nebraska State Legislature, District 12, in 2006, losing to Steve Lathrop by only 14 votes. “Things do happen for a reason,” Stothert says, “and I do think this is a better fit for me because I do love local politics.” Steve Lathrop still teases her that if it weren’t for him, she wouldn’t be mayor. “And it’s true,” she laughs. “If I would’ve won that race, I would’ve been down in the Legislature and I wouldn’t have been mayor!”

Stothert speaks to many women’s groups and says the primary reason most women do not run for public office is surprising. “You would think it’s because they don’t want to take the negative campaigning, but it’s not that. They say, ‘I don’t want to run because I’m afraid I’ll lose.’” Stothert’s response: “Losing isn’t a bad thing. You’re never going to win if you don’t try.” Having lost a race herself, she has no regrets. “I would do it again, even knowing the outcome,” she says. She learned a lot about herself and about Nebraska. “And I didn’t give up! Two years later I decided to run for city council.”

Three years into her term on the council, Stothert says she didn’t like the way that administration was running things. “I felt like I had two choices — I could serve under the past mayor for another four years, or take him on and try to replace him.” If she feels like she’s doing a good job at the end of this term, Stothert says yes, she’ll run for re-election. “But if things change, and I don’t feel like I’m what the city needs, then I can move on.” Back in 2006, she had planned on being a legislator, but had to refer to plan B and make other choices when she lost that race. “And plan B turned out to be the best. So it was worth it,” she says.

“I like what I do,” Stothert says. “I’m always eager for Monday mornings to come.” Her advice to other women is to get involved and stay involved.