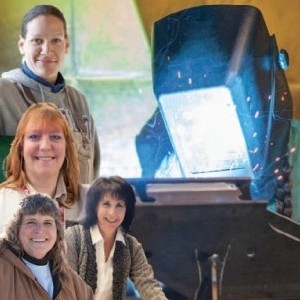 In 2013, asking a young girl what she wants to be when she grows up is likely to yield a greater variety of answers than it would have 20, 30, or 40 years ago. You will probably hear “soldier,” “doctor,” and even “president,” alongside more traditionally common answers like “princess,” “ballerina,” and “movie star.” Nonetheless, it remains less likely for a girl to set her sights on a career in traditionally male-dominated trades such as construction, truck driving, carpentry and welding.

As girls grow up and enter the workforce, this predilection can cut them off from many worthwhile employment options. According to California-based Women in Nontraditional Employment Roles (WINTER), women are “dramatically underrepresented in areas where employment opportunities are plentiful and wages are livable.”

Statistics found by WINTER and compiled by the Bureau of Labor Statistics and the National Commission on Working Women reinforce the gender equity gap: 80 percent of women in the workforce continue to occupy low-wage, low-status, traditionally female positions.”

Naturally, Omaha women face the same lack of parity in such vocations. “We recognize there are fewer women in the trades than what would be desirable,” says Jan Kauk, executive director of Heartland Workforce Solutions (HWS), an organization that assists unemployed and underemployed individuals in the greater Omaha area. “Women are also underrepresented in high growth jobs such as truck driving and welding.” HWS works with job seekers on meeting their personal employment and economic goals, and also with employers to “ensure that businesses have the talent they need to retain and grow middle-skilled jobs in the area,” Kauk says.

“In [late 2012] HWS hosted a labor/trade forum to share information about recruitment and training of persons in the trades. Union representatives acknowledged that they would like more women to enroll in the trades, as they are underrepresented. Union reps were interested in ways that HWS partners could help that enrollment — which we will — but they also admitted that some workplace cultures are not as sensitive as they need to be if they are going to attract more women into these roles,” she says.

HWS serves many mothers who are their family’s primary breadwinner, with services “designed to train and assist persons that are most in need of basic education, employment skills training, and career pathway assistance with the ultimate goal of employment,” Kauk says. Many of these women don’t necessarily consider occupations in nontraditional trades.

“The women we assist don’t frequently ask about male-dominated fields in their job search. The good news is there is education and encouragement for women to look into such fields. If a woman has the interest, aptitude, and is willing to push through some of the barriers to succeed, then there is no reason not to consider such jobs. Women role models are most helpful to encourage another woman to explore the possibilities of such fields.”

Abbie Kretz, senior organizer for Heartland Workers Center (HWC), echoes the need for role models — who can lead by example — in getting more women interested in working in nontraditional trades.

“I think it is important that [women] begin to fill in those fields traditionally held by men,” says Kretz. “In many ways, it starts to change the perception of the industry, and particularly as women begin to fill the leadership and management roles in these industries. By seeing other women in these traditionally male-dominated trades, more and more women will enter into them — and see them as a career — by seeing others like themselves in those fields. That is really important as the faces of certain industries really begin to change to be more representative of a larger society.”

Kretz says the HWC works primarily with the Latino/Latina immigrant community, focusing on worker rights, civic engagement and leadership development. She says that while there is still a gap, HWC does see more women showing interest in work in the trades, particularly Latinas, although they may find an atypical route into such jobs.

“One industry that has been dominated by men for years is construction, and over the last 10 years, a variety of small Latino-run construction companies have sprouted up. Although these are typically male-run, there are some women involved with these small businesses, typically with the administration of the company,” Kretz says. “They have often been involved with ensuring that the companies are up to par with the state and federal regulations, payments and purchasing. But many also know how to do the job — whether it be roofing or stone laying. They are there with their male counterparts to get the job done. Particularly talking about construction, many women may have not had the chance to work in it until a male family member has first made his way into the industry. But for those women who have gotten into construction, they have been vital in making the business grow at various levels.”

One big factor that makes the lack of women working in the trades more urgent is that construction in particular (which umbrellas a large area of skills) is projected to be a major growth area in the near future, particularly with the need for infrastructure rebuilding and green building construction. According to Tradeswomen.org, “Women are the largest untapped resource for the construction industry. While women can benefit from entering construction careers, the industry also benefits by expanding its recruitment pool to include the other 50 percent of the population.”

Not only out of fairness should women be privy to the coming rush of jobs, their presence in the workforce will be truly necessary in order to meet demand. Tradeswomen.org notes, “For every four people who leave the trades, through retirement or otherwise, the apprenticeship programs supply only one new person to enter the trades. The Department of Labor estimates that the construction industry will need to hire about 240,000 new workers each year for the next five years. But only about 150,000 new workers will come into the trades, creating a continuing shortage of skilled workers.”

For its part, the federal government is also taking steps to help working women gain more of a presence in the trades. In a June 2012 news release, the U.S. Department of Labor announced $1.8 million in grants to support women in nontraditional occupations. The grants were split evenly between six community-based groups, each connected to the Women in Apprenticeship and Nontraditional Occupations program, in Boston, Chicago, Atlanta, Los Angeles, Portland, Oregon and Morgantown and West Virginia.

According to the Department of Labor, “The grants will support innovative projects that improve the recruitment, hiring, training, employment and retention of women in apprenticeships in industries such as advanced manufacturing, transportation and construction. Within these industries, the grants will fund activities focused on three occupational areas: existing occupations expected to experience primarily an increase in employment demand, existing occupations with significant changes to work and worker requirements, and new and emerging green occupations.”

Secretary of Labor Hilda L. Solis says the grants are needed. “Apprenticeship programs are effective pipelines into growing industries. But too often, these programs are not as accessible to women. The federal grants announced today will better connect women with apprenticeships, helping them to gain skills in fields that offer long-term career opportunities.”

Opportunity is key, says Kretz. “The Latino culture is one that uses social networks. In other words, many people, both men and women, will ask those they know if there are jobs available and from there, look for those. If there is the perception that a woman cannot do the job, it may be less likely that she will be told about it. But I think as that continues to slowly change more opportunities will be presented in order for women to begin to work more in male-dominated industries.”

Individual women workers may be surprised at how well-suited they are to work in the trades, with the benefit of access and training. They may even find they already possess skills that, looked at from a different angle, may give them an edge in certain trades.

“Persons that take time to investigate jobs that align with their interests may be surprised to find jobs that closely fit with skills they already have,” Kauk says. “One example is a manufacturing plant that consistently looks for a ‘chemical cook.’ The HR director said if a person has a background in culinary arts, can measure and read recipes, and has a strong work ethic, they would be considered a highly desirable candidate for the well-paid job.”

According to Tradeswomen.org, “Many women already do physical jobs that require lifting, coordination, and a serious work ethic, such as hospital work, restaurant work and child care. Women working in these low-paid jobs could be ideal recruits for high-wage, high-skilled construction careers.”

As in all fields, many women find themselves not just acceptable at occupations in the trades, but perfectly suited for the work.

“Several women welders have been cited as having more patience and precision for tough welds than some of their male counterparts,” Kauk says. “That doesn’t mean all women welders are great welders, but it opens the door to the potential conversation that women can fill any job. I think a workplace that is open to diversity will always reap the benefits of different perspectives, styles, strengths and skills.”