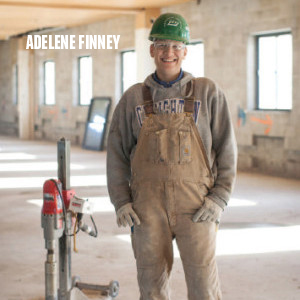 Not everyone earns a four-year college degree and then lives happily ever after. Although Adelene Finney tried it more than once, she finally realized college was not a good fit. “I tried college once at 19 but was not really ready to be a grown up yet, I guess,” she says. Years later, Finney carried a 3.24 GPA at College of Saint Mary, working toward a degree in business, but found that sitting in a classroom was not for her. “I tried to do what everybody says you are supposed to do,” she says. “I just didn’t want to do it.”

At that time, Finney had taken a hiatus from a carpentry apprenticeship that she was almost halfway through to start a family and stay home with her little ones. She returned to carpentry in January of 2012, working for a drywall company, but did not enjoy it. “It was horrible going to work,” she says. Still, she became intrigued by the other trades she witnessed through her job. “I saw the plumbers and that’s what interested me. They made a lot of money and they had a great skill under their belts,” she says. Plumbers Local Union No. 16 began accepting applications for the first time in two years, and Finney jumped at the chance. She is the only woman apprentice in a class of 12, which began in June of last year.

It is a five-year program consisting of classroom instruction two evenings each week and one Saturday each month from September through May. Apprentices also receive on-the-job training while working a minimum of 40 hours per week for local contractors. They earn a wage reflective of time and effort in the program. The only cost to the student is for textbooks.

“Honestly I knew there was a lot of money to be made in plumbing,” she says in explaining her reasons for taking an initial pay cut to switch apprenticeship programs from carpentry to plumbing. “I always wanted to make a good living and not just settle.” Even though Finney is making sacrifices of both time and money now, she feels confident that it will be worth it in the end. “When you are done with this apprenticeship, you have an actual skill that you are able to use all of your life,” she says.

Finney’s journey in the trades began with the Denison Job Corps Center in Denison, IA in 2005, where she completed nine months of carpentry pre-apprentice training. She then moved to Omaha to begin her apprenticeship with Carpenters Local Union No. 444 (recently renamed Local No. 1306). She met her husband, who is also in construction, and they married. “I think he was almost more excited when I got into the plumbers’ union than I was,” Finney recalls. “The possibilities are endless.”

“It is hard work,” says Finney. “You are in the elements — heat, cold, you’re in it all. But I enjoy going to work and learning new things about plumbing every day.” Her only regrets are that she did things “kind of backwards. I stress to my girls to go in order: career first, then marriage and kids.”

“It is stressful on my family,” Finney says. “But this is the best way for me to make money for my family and to provide them with the options of any future they desire for themselves.”