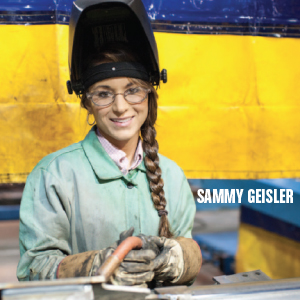 Working in the trades is nothing new for Sammy Geisler, who has been a welder at Valmont for the past few months. She has also been a truck driver in the Army National Guard, switched rail cars at the Cargill plant in Blair while working for Savage Industrial Rail, and trained wall crews as a line leader at Christensen Lumber, where she worked as a framer for four years.

Her first job was as a telemarketer, where her co-workers were predominately women. But working in male-dominated industries doesn’t bother Geisler, who says she actually finds it more comfortable.

“I like the team environment, and there is really no drama,” she says of her job at Valmont. “Everyone is really friendly here and is looking to help out.”

Geisler had been a stay-at-home mom for a year when she decided to go back to work with a temporary employment agency and was placed at Valmont working in the inside shipping department. It wasn’t long, though, before she made her ambition to become a welder known, and she was given an opportunity to weld test. “They gave me three days to prove I could catch on quickly and keep up,” she says. After a few days working as a temp, she was offered a full-time job.

Geisler’s interest in welding began as a teenager, when she took welding classes at Fremont High School. “I was a tomboy in high school, and I had some stuff I needed to get fixed, so I figured I could do it in class,” she says. “It just came pretty natural.”

Valmont has a reputation as a teaching company. Geisler was able to learn how to weld on the rounded surfaces of the pipes used in the irrigation systems while on the job. Her previous experience had been on flat surfaces. Work at Valmont is done on a production line. “Because we make so many of the same product, we have a line and it goes a lot faster that way,” Geisler says.

She runs the line banner – a robot that welds brackets after the pieces are put in place. Geisler also welds on the “Moto Man,” a large robot that tacks on parts for employees to weld.

Geisler appreciates that Valmont offers opportunities for advancement. She started in October as a Welder A and after six months can take a test for her Welder B certification. She also hopes to train on Moto Man and work up to the lead-man position.

“Welding is a pretty high-paying trade, and Valmont is a good company to work for,” she says. Geisler says her supervisor is very understanding, even sending her home when her 18-month-old daughter was sick on her second day in the Irrigation Production Building. The plant runs 24 hours a day, and Geisler currently works the graveyard shift, from 9 p.m. to 7 a.m.

Geisler says that when she first started at Valmont, she had to prove herself. “I liked that about the job. It was more of a challenge.” Now that she has demonstrated she can do the work, “I am one of the guys.”

As one of a handful of female welders at Valmont, she has this advice for other women looking to work in the field: “It’s only as hard as you make it. If you really want to do it, you can.” She adds that there are definitely opportunities for women in the field of welding.