A Conversation with Kristy Gerry 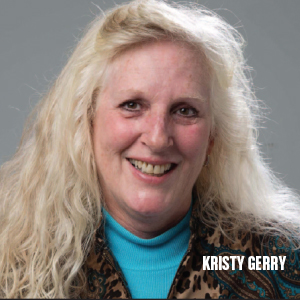 Second in a series of interviews with Omaha’s top female executives.

Kristy Gerry has spent most of her career in male-dominated environments in positions not traditionally held by women. In her current role, Gerry oversees the Omaha World-Herald’s Freedom Center, where she is responsible for the production and printing of the newspaper. Approximately 85 percent of the 150 employees in her division, and all of her direct reports, are male. She is one of four women in senior management positions at the World-Herald.

TOW: Have you had mentors during your career, and if so, who had the most impact on you?

I can’t say there was ever a formal decree by anyone that “I will be your mentor” or by me declaring “You are my mentor.” It’s been a lifelong parade of teachers, role models and leaders who left an impression. Sometimes it’s not until years later that I realize how much I learned from them or how much of an influence they actually had.

I graduated from college with a Bachelor’s in Political Science, not a degree in newspaper production. A co-worker who knew a lot about printing and newspaper production took the time to teach me. That was 33 years ago but I credit him with teaching me everything I needed to know. My manager at another paper had the greatest influence on me as a leader. That was nearly 20 years ago but I still feel his influence nearly every single day. He was my role model.

TOW: How can women most effectively mentor other women?

I can’t speak to an effective mentoring technique between women. I don’t know what that would be or should be. I do believe that in order for any mentoring relationship to be effective it has to be a good fit. There has to be mutual respect and each has to be personally invested in the other’s success. One party has to be open-minded, willing to be observant, inquisitive with a desire to learn. The other has to acknowledge they have a role as teacher, leader, partner and role model. The thing is, I think in any relationship those roles constantly flip back and forth.

TOW: How can young women best position themselves for success in the corporate world? In other words, how does one traverse the path from worker bee to decision maker and get the money, title and respect?

Well, certainly not by demanding it or acting entitled to it. Perhaps I’m old school but I still believe a seat at the table has to be earned, proven. Before you’re going to be trusted with the “big” decisions you need a proven decision-making record as a worker bee. Then I think you must be willing to take the road less traveled. Be willing to go where there’s a need in your company. Take that assignment no one else seems to want; and by remembering that it’s your responsibility to be of value to your company.

TOW: What is the most important trait a woman needs to be successful in a senior leadership position?

TOW: What was the biggest mistake you made in your career, and what did you learn from it?

I was at a company where the ethics and philosophies didn’t match my own. They weren’t bad or illegal, just a completely different belief system. I tried to drink their Kool-Aid and commit to their goals and methods, but I was miserable. Needless to say I wasn’t successful there, but it was probably the most significant experience in my career. I learned how important the right match of individual to company is. The experience influenced forever how I approach recruiting and hiring in every position I’ve been in since.

TOW: What is the best way for women to network in Omaha?

My general rule of thumb is to get involved in organizations or events with people interested in the same things you’re interested in.