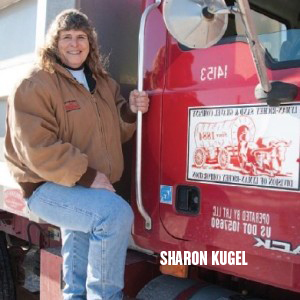 The long construction dump trucks, carrying the box of second truck behind them, are adorned with caution signs that read: “PASS WITH CARE,” “LONG VEHICLE” and “WIDE RIGHT TURNS.” Although many people might be put off driving these 65-foot-long vehicles, Sharon Kugel has been doing it for more than 32 years.

“I just always wanted to be around the big trucks,” says Kugel, who works for Lyman-Richey Sand & Gravel. “Years ago I wanted to join the service to be a heavy machine mechanic, but my dad talked me out of it.” Instead, she drove a mixer truck for Wahoo Concrete and then moved to driving the truck and pup she drives today. She took the job with Lyman-Richey at age 24 and has stayed with the company.

“I can’t see myself doing this when I’m 60 or 65,” Kugel says. “One of these days I’ll just go and get myself a normal job.” Yet she admits a “normal job” could never have held her interest over the long haul. “I’ve always kind of been a tomboy, being raised with three brothers. I could never see myself behind a desk or trapped inside an office all day.”

Kugel hunts, fishes, rides horses and considers herself “outdoorsy.” She says she likes the variety that driving provides. “You see different things all day long. I like being outside all the time and enjoy working with the different contractors.”

Initially though, winning the respect of individual contractors was a challenge — one Kugel eagerly conquered. “You can tell when you get on a job and the contractor’s thinking, “Oh great, a woman driver, it’ll take her all day.” Kugel prides herself on proving that notion wrong. “I just want to show them I can do it.”

The challenges that lie in maneuvering this 65-foot-long, 95,000-pound double-load vehicle are exactly what make Kugel enjoy her job. “The more difficult it is, the more I like it,” she says.

She could, however, do without the extra stress that traffic causes. “Other drivers don’t respect trucks like they should,” Kugel says. “I will never understand why people would pull out in front of a 95,000 pound truck. Don’t they realize that we can’t stop on a dime?” The trailer pulled behind is all dead weight, she says, “so it can be tricky, especially when it’s slick. When you go to stop, you have to keep an eye on that back so the trailer doesn’t come around to meet you at the door!”

Kugel overcame the initial learning curve of backing up heavy loads when she was driving concrete mixers. “One of the guys told me to just act like I’m standing behind the guy in the mirror giving me directions,” she recalls. That suggestion helped. “Some people can’t get that down,” she says. Backing up and taking directions from a reflection in the mirror makes everything seem kind of backwards. “You just have to be that type of person that gets it. It’s just like an artist sees a certain perspective that other people can’t.”

Kugel’s only regret is the time she missed with her three boys when they were young. “I didn’t have the family life that most women do,” she says. “You give up a lot.” Kugel’s husband also works in the field of construction, but as a supervisor he had more control over his hours. He was able to be at sporting events and activities that she couldn’t always make. “We kind of traded off,” she says.

For now, Kugel is where she wants to be. “I don’t think I’d be as happy just working on heavy machinery. I’m sure I would have wanted to drive them!”