Creating a Bond Stronger Than Metal 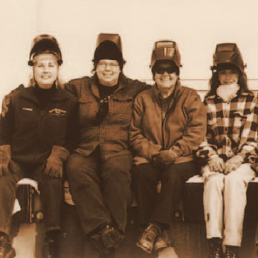 Seventeen years ago, a jewelry designer from Southern California named Peggy Ritschel decided to add welded metal to her art. Before long, a community was born.

Shortly after moving to Omaha, Ritschel enrolled in an introductory welding class at Metropolitan Community College’s south campus. Sculptural welding was not listed on the curriculum, so Ritschel took a basic course in MCC’s general welding program to learn oxyacetylene torch welding.

Months later, she facilitated a weekend workshop demonstrating her new art form. “I had 25 students who wanted a class,” she recalls. MCC administrators invited Ritschel to teach an ongoing class as an adjunct instructor, which marked the beginning of the Sculptural Welding Program at MCC. “I just loved it and wanted to show people how to do it,” she says.

“Peggy’s vision to teach welding to the artist community as a woman was ground breaking,” says Sharon Boynton, once a student of Ritschel’s and now a fellow instructor. “I followed her through the door.” Boynton attended Ritschel’s early classes and was hooked. “I’m a lifer,” she laughs.

From these early classes came a group known today as the “Women Who Weld.”

“Women Who Weld” was actually the name of a metal sculpture art show that was held in April of 2010 and 2011 at the Bancroft Street Market Gallery in the Old Market. Both showcased welded art by women who had originally met during sculptural welding classes at MCC. That’s where they got their name, but what keeps these women (and now even a few men) together burns much brighter.

Boynton, like many sculptural welding students, mastered both Welded Sculpture I and II. After satisfactorily completing both introductory courses, students qualify to take Sculptural Welding as a non-credit quarterly course indefinitely if they choose. Boynton transitioned from student to staff eight years ago when the program moved to MCC’s north campus. Boynton brings with her a Bachelor of Fine Arts Degree and years of experience in drafting and illustration. She also works as a professional artist with her own studio space in Florence, as does Ritschel.

“This program seems to draw people who are looking for self expression through a physical task. And it is very physical,” Boynton says. “It’s a multi-sensory environment that brings your entire being into focus.” She’s referring to the heavy equipment, open flame, temperatures exceeding 6,000 degrees Fahrenheit and the need to be aware of others working near you — all cutting, burning and molding metal. Once the initial fear of working with fuel, fire and heavy gear diminishes, it’s an empowering realization that you can manipulate these tools and materials to create something that is your very own, Boynton says.

The sculptural welding program continues to grow because students continue to learn. “People return because whatever they find here, they want more of,” Ritschel says. “You couldn’t do this by yourself in your own studio space without all of the expensive equipment that we have at the welding lab. So that in itself is nurturing for an artist to be able to come in and do exactly what they want to do and have the equipment to do it.”

One draw for women, Ritschel believes, is that the classes are taught by women. “It makes women feel more comfortable and gives them permission to jump in and do some welding. This is an empowering medium.”

It’s not just for women, though. “We have some men,” says Welding Student Melody Scott. “And they have no problem being instructed by Peggy and Sharon.” That fact is proven during non-credit lab time, as men from all types of previous work and life experiences file in, eager to check with either Sharon or Peggy to discuss direction in fabricating current projects.

Scott, a longtime furrier for Overland Outfitters, commends MCC for providing a facility that enables average people to learn and experience this process of sculptural welding at a reasonable price. “It’s not just bonding metal to metal, it is actual people working together in unison,” she says.

Scott describes this community as representative of many walks of life — retired people, those active in full-time careers, artists seeking to expand by adding a new medium to their repertoire. “You’ve got heads of companies, and then you’ve got…um…furriers!” she adds with a laugh. “And housewives,” Ritschel pipes in, “trying to get away once a week to have some time to be creative.”

“Each student brings their own perspective and interest,” Boynton points out. They bring their individual experiences and incorporate them with what they learn in metal sculpture and share with one another. She rambles off names of artists, both men and women, who spend time creating in the MCC welding lab as a part of this exchange. The list includes well-known local artist Michael Montag, who fashioned the momentous figure of Christ positioned in front of The Holy Family Shrine above interstate 80 near Gretna. “It’s really nice when we have professional artists working alongside people who are just starting out and have never had a chance to self express,” Boynton says.

Non-credit lab time allows for free-flowing ideas and mutual mentoring. “We are able to help each other grow as artists. Therein is the true meaning of community. It is in the sharing,” says Boynton. Ritschel and Scott smile and nod in agreement.

Are those classes still offered?