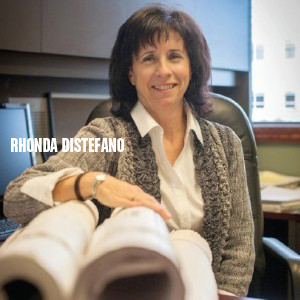 Viewed by many as a pioneer for women in construction, Rhonda Distefano, director of construction facilities management and environmental services at Immanuel Communities, broke into a male dominated field in the early 1980s, when it was extremely rare to see a woman working construction. “I have far exceeded my goals,” she says. “The satisfaction isn’t anything that I could have dreamt of.”

In 1984, Distefano moved from intern to project engineer at Weitz Company after graduating from Iowa State University with a bachelor’s of science degree in construction engineering. At the time, it was considered a huge gamble to hire a woman in this field. Distefano commends Weitz for paving the way for women in construction. “When you look at general contractors, Weitz Company employs more women than any other company,” she says.

“I was put right on the job site, a 20-story office building in downtown Des Moines, Iowa. That project manager was not happy to have a woman on the job,” she recalls. He tried hard to ignore her, but once he realized she knew what she was doing, his attitude changed. “I didn’t realize it at the time, but I got off to a really good start because of that man,” Distefano says. “He smoothed the road for me a lot. He treated me with respect and made sure the other guys on the job did as well.”

Even today, women in Distefano’s line of work are under constant scrutiny. “You have to be at your best all the time, which I think makes you a better employee,” she says. “But when you are successful, they remember who you are.” Many times on job sites, male co-workers she’d never met approached her with familiarity because they’d already heard about her. “They know who I am because I’m the girl in the room,” she says.

Her reputation for competency spread rapidly, and she was promoted to project manager, then preconstruction manager and finally vice president of preconstruction operations at the Weitz company. When reflecting on women working in fields dominated by men, she says, “You think you have these barriers, but you don’t. They are mostly self-imposed.” Rather than differentiating herself because of her gender, Distefano sees herself as a valuable member of the team.

Her only regrets are missed moments with her daughter, Brook. “When I was younger, I wish I’d had more of a work/life balance,” she says. “Being a mother is a full-time job also.” But she made it work: rolling out construction plans on the living room floor after bed time, and occasionally bringing Brook along for meetings at the office. “I would sometimes put a hard hat on her head and carry her on my hip to walk a job early in the morning before I could take her to day care,” she says, laughing. “You can’t do that these days!”

In September of last year, Distefano resigned from Weitz Company in search of an opportunity where she could use her construction experience to more directly benefit people. “My goals changed in my late 40s. I wanted to do something more community-based,” Distefano says. After leaving Weitz, an administrator from Immanuel Communities approached Distefano with a job opportunity that fit the bill. Immanuel Communities is a nonprofit organization that provides housing to seniors. She began this phase of her career last October.