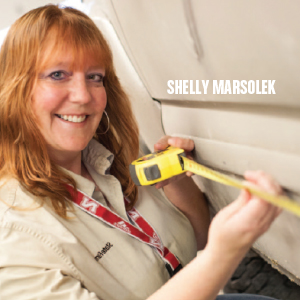 Attending Metropolitan Community College to study auto body repairs was a big career change for Shelly Marsolek, who worked as an administrative assistant for more than 15 years. Marsolek, who received her associate’s degree in applied science in collision repair, traded in the office for a job that has her working primarily from her car as an auto estimatics inspector with State Farm Insurance.

After taking a year off work following the birth of her second son, Marsolek was looking for a new opportunity. She learned about Metropolitan Community College’s programs from a friend.

“I had always been interested in the fundamentals of how cars operate,” says Marsolek, who originally considered mechanics as a career choice. The single mother of two instead opted for the shorter collision repair program, figuring she could always switch to mechanics if she decided it was a better fit.

For much of the 18-month-long program, Marsolek was the only woman in her classes. Most of the other students treated her with respect. “They knew I was there to learn, and I was one who would challenge the instructors. Most of the time, I asked questions that the guys were scared to ask,” she says.

Getting through the program wasn’t easy. Marsolek worked two part-time jobs, raised her two sons and had three of her sister’s kids living with her while she attended classes and maintained a 4.0 GPA. But she knew there would be long-term benefits. “I knew it was going to be beneficial to me as a person, and it showed the kids that no matter how old you are when you go back to school, you can pursue your dreams and goals in life,” she says.

Marsolek’s initial goal was to open a body and mechanics shop that employed female workers and catered to women. But following a 10-week internship in 2008, she was offered a job with State Farm Insurance. She originally wrote estimates in the drive-through facility, while completing additional training so she could move into the field. Now, Marsolek writes estimates for customers at their homes, places of employment or body shops and also works with shops reviewing estimates.

Being an estimator is a detailed job. “You have to envision what that body technician is going to have to do to perform the repair,” she says. It requires determining what could go wrong based on the damages the vehicle sustained. It also involves knowing what parts and repairs are needed to input that information into a computerized estimating program.

“I enjoy the interaction with the shops and the customers and explaining the estimate to them in terms they will understand,” Marsolek says. “I love the team I work with. It’s a great group of guys who are really knowledgeable in this field.”

Marsolek admits that it took a while for her to be accepted. “I knew it was going to be tough,” she says. However, once others realized she wasn’t afraid to get dirty and was knowledgeable about the job, she earned their acceptance.

Working with State Farm provides Marsolek with the opportunity to help others, and the job also provides stability for her to take care of her family.

“Looking back, I am glad I took the path I did,” she says. “I’m glad that I had the courage to actually make a change.”