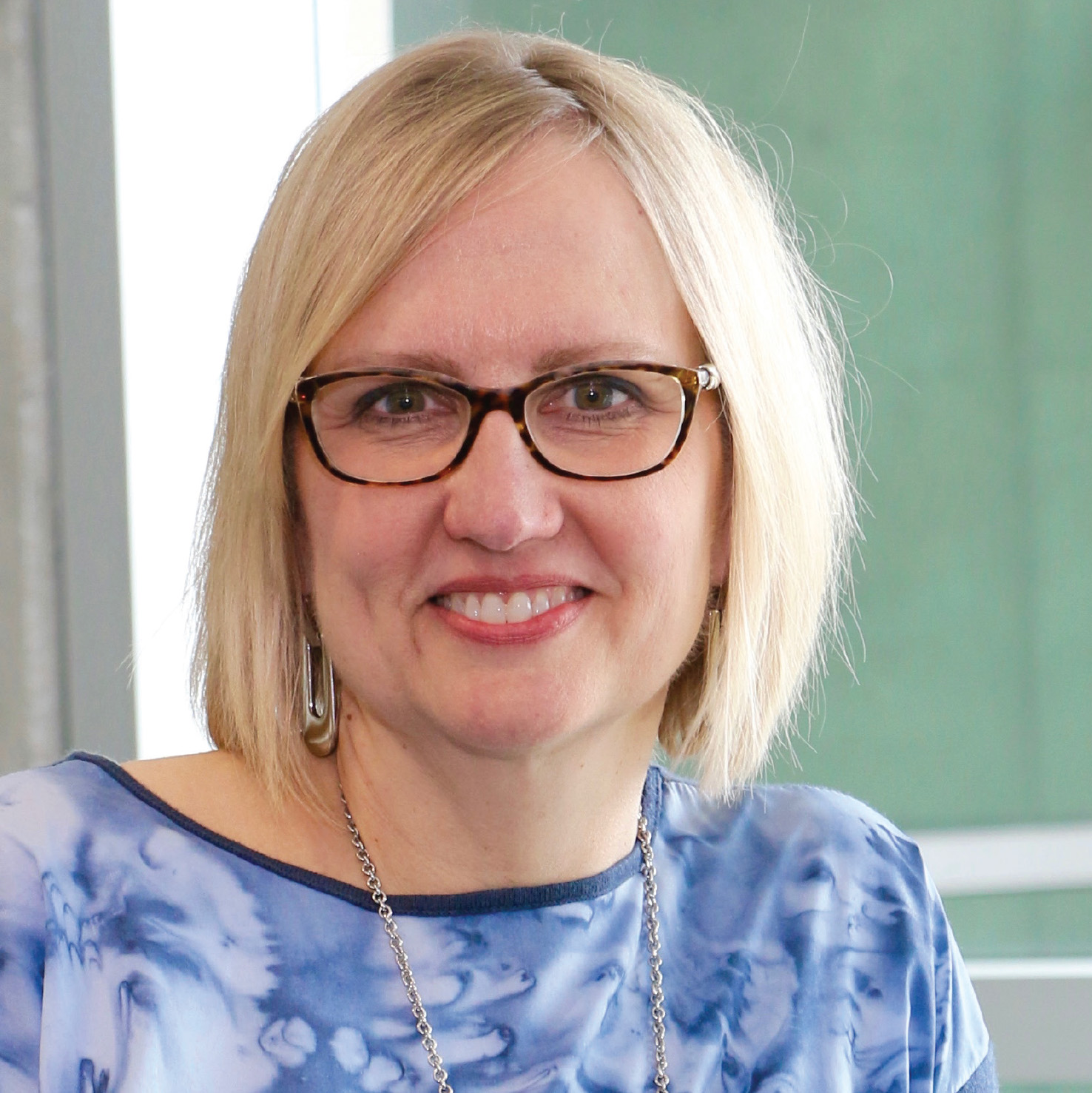 On July 8, 2009, Trisha Newell lay sprawled out on a stretcher with sirens blaring and paramedics working furiously to save her. What’s important in life became crystal clear. “So, there I was having a heart attack and I realized riding in the ambulance that I had been extremely blessed. I thought about my husband and my children and how lucky I was,” says Trisha Newell, corporate advertising manager for HDR. “My priorities absolutely changed that day.” Newell was one of 10 percent who survive the kind of heart attack she suffered. “I am so grateful. I wouldn’t have wanted my mom to lose a child before she died,” Newell adds. Her mother had been diagnosed with stage-four pancreatic cancer seven months prior and was entering hospice care on that very day.

“My definition of failure changed that day. I used to feel like the worst thing that could happen to me was to fail at work, but I learned that the relationships you have in life are what really matter,” Newell reflects. “As I was riding down the street in that ambulance, all I thought about were the people I love. I realized they are what is most important in my life but not necessarily where I spend most of my time and energy.”

Newell started her career at HDR straight out of college in 1993. She graduated from UNO with a Bachelor of Science degree in public relations. “I graduated late at age 30, so I always thought I was coming from behind,” she says. “I felt like I had to work twice as hard just to measure up.” She entered the world of engineering, a field she was not familiar with, and then had babies at 32 and 34. “So I was trying to manage being a professional, a great wife, mom and daughter and keep a house. I felt overwhelmed frequently, probably mostly because of the pressure I put on myself.” Newell says her “type A” personality drove her to try and give more than 100 percent in every area. “At one point my husband said, ‘You only have 100 percent. That means family is part of that. Work is too, but all totaled it only adds up to 100.’” Rather than slow her pace, Newell says her solution was just to try and hurry faster.

After her mother’s condition worsened in 2009, Newell had a choice to make. She was torn between her personal drive and responsibilities at work and her desire to spend as much time as possible with her mom before she died. As she grappled with requesting leave under the Family Medical Leave Act (FMLA), a friend’s not so gentle nudge pointed her in the right direction. “You’ll never have this time with your mom again, so what’s the question?” Newell immediately went to her employer and asked for the time off to care for her mom as she died. “Even though I have two sisters, I needed to be there too, for me and for my mom,” she says.

“The great thing about terminal cancer is that it focuses your mind and you know what you have to do,” Newell says. “Time with my mom became my priority and almost my sole focus. My workplace was very accommodating.” Newell’s heart attack occurred near the ending stages of her mother’s illness. HDR provided Newell with short-term disability benefits and her doctor prescribed a longer recovery time due to the extenuating circumstances. “I was able to fully recover physically and get back to being with Mom, which is where I wanted to be, until she died about seven weeks later,” she said.

“When you lose your mom, and you’re a woman, you see the arc of her life from beginning to middle to end. You start thinking about your own life and what’s important and where you have focused your energy,” Newell says. “And I realized how I had been driving myself in ways that maybe weren’t the most important.”

Newell’s perspective shifted completely. She needed time to regroup, so requested to work part time temporarily. “They [HDR] were very kind in making it possible for me to work 30 hours per week and still provided benefits,” Newell says. “It’s a company policy.” Newell carries the insurance for her family so that was crucial. “My employer’s openness to letting me deal with my life situation allowed me to be gentler on myself and really acknowledge what needed to be done and where I needed to focus.”

She used that time to educate herself on ways to eat healthier on a busy schedule
and devised a heart-healthy exercise regimen. Fast food, and eating out six to seven times a week, was a thing of the past. Slow food—cooking meals at home—would be her new normal. “I had never read labels carefully before and it was an eye-opener!” she says about her new devotion to keeping her sodium intake under 2000 mg a day and her fat intake below a certain percentage. Recently, HDR opened an on-site café that always provides healthier food options. “It’s another way that my company supports a healthier life-style,” Newell says. “I have access to that every day.”

Her lifestyle change was not just about food and exercise, though. Her choices about time and energy shifted as well. “I work in a very fast-paced, deadline-driven environment with a very high achieving group of professionals. We are always raising the bar on what we do,” Newell states. “Being in that environment, I wanted to keep pace. Now, I still do my part but I look at the bigger picture too.” Pre-heart attack, Newell was the kind of worker that never took a break during the work day. “I realized it was perfectly OK and even healthy to get up and walk around from time to time and talk to co-workers,” Newell says. “I actually found that I got more ideas that way.” She also allows herself to take advantage of the flextime her company provides—to leave work when necessary to take care of things at the house or when her kids needed something. She also arrives a little after 8:00 on days that she works out at the gym in the morning. “I can make up the time,” she says. “They are very flexible about that.” The flexibility has always been there, but Newell rarely gave herself the leeway to take advantage of it. “I used to get very upset if I was late to work or if I needed to work late but I had to leave to pick up the kids,” she recalls. “I would get very anxious.” After her heart attack though, Newell says, “I started to realize the only one putting those demands on myself was me.”

She also holds her choices about volunteerism to a different standard. “I stopped volunteering for activities that I thought would make me more successful, and I started volunteering for things that would allow me to spend more time with the people I love.” She organizes a team for the American Heart Association’s Heart Walk every April, and has served as an adult leader for the senior high youth group at her church. “My youngest child graduated from high school this year,” Newell adds. “I made sure that my focus and my priority has been to be accessible to her this whole last year, and I’ve really celebrated each moment.” Newell also sets aside time every Sunday afternoon to spend with her grandchildren.

Losing her mother and surviving a severe heart attack reframed how Newell thought about every aspect of her life. “I recognized that you can have it all, but not all at once. There are other things I want to do, but they will wait,” she says.