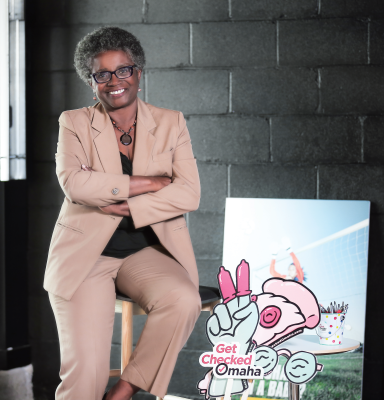 Teen sexual health has been one of the issues most prominently covered over the past 20 years by Today’s Omaha Woman magazine. Within the first couple of years of publication, the magazine was devoting entire issues to sexual health and teen pregnancy prevention, and interviewing local teens and their parents about their views on abstinence and birth control.

Then, in 2004, alarming data was released. The Douglas County Health Board announced STDs—specifically chlamydia and gonorrhea—were at epidemic levels in Douglas County. The concerning data did not go unnoticed by the Women’s Fund, publisher of Today’s Omaha Woman.

Ellie Archer, Women’s Fund executive director at the time, recalls how she received the alarming news. “I got a call from Mary Heng-Braun, who was one of the founders of the Women’s Fund and the first executive director. She really put it on my radar that this was an issue where we had epidemic levels of STDs in our community. One of the highest in our country, if not the highest at that point,” Archer says.

Although a delicate subject, Archer knew the first step in taking action was to start the conversation. And this would not be just any conversation—STDs were a topic many weren’t ready to talk about or willing to address. “It was certainly a worthy issue to take on and [I knew] that it would be a controversial one,” Archer says. “Well, I’ve never been one to back down from a challenge, so we dove in. We had a very small staff—less than two full-time equivalent people. I think it never got more than three full-time equivalent the entire time I was at the Women’s Fund. So we worked really hard, on a shoe-string budget,” Archer says.

Early on in the process, the Women’s Fund created a community survey for area nonprofits, asking which they considered the top three critical issues that impacted women and girls most. Each time the survey was conducted, the same three issues became apparent: teen pregnancy, self-esteem and lack of sexual literacy.

“With that information, we started giving a lot of grants through the Women’s Fund. We gave out a number of grants that addressed the problem in one way or another,” Archer says, adding some grants helped fund STD testing and furthering sexual education.

The Women’s Fund also launched a number of efforts to get the conversation started and information out in the community. Some of the efforts were extremely grassroots, such as handing out information addressing sexual health and literacy on the subject in local bars and wherever young people gathered. Archer recalls one of the most controversial efforts was promoting and funding the distribution of condoms in bars on one particular St. Patrick’s Day, which included information on protecting oneself.

Younger women were predominantly impacted by the STD epidemic, and this was the Women’s Fund’s greatest concern. To combat this issue, the Women’s Fund tackled it from every possible direction they could think of, including devoting many issues of the magazine to covering the topic, and developing a print ad campaign touting the importance of getting tested. Archer and her team contacted school newspapers and journalism teachers in Omaha in an effort to start placing these ads. The “Get Tested” message also ran on area billboards.

Archer notes that in the three years those ads ran in many school newspapers in the Greater Omaha area, there was not a single complaint from a parent. “This indicated to us that, in general, most people were supportive of up-to-date sex education and, in tackling this topic, the threat to young girls,” Archer says. Today, STDs continue to remain a threat to Omaha area women and girls. In 2015, it was reported that Douglas County’s STD rate remains above the national average. Teen pregnancy and sexual literacy continue to prove to be prominent issues in the metro, too.

The efforts to improve these issues and the research conducted over the years have resulted in the culmination of a very important Women’s Fund project: The Adolescent Health Project. In 2013, the Women’s Fund, along with The Sherwood Foundation, convened a group of major community stakeholders and asked them “What will it take for us to meaningfully address sexual literacy and the effects of sexual literacy?” says Adolescent Health Coordinator Brenda Council.

To answer that question and address the lingering issues affecting young women and girls, the conversation pointed to three things: research, key strategic partners and major coordination. Research ensued to identify best practices, including an environmental scan of Omaha “to see whether

Brenda Council, on the cover of Today’s Omaha Woman—Summer 1999.

there were agencies or organizations that were providing services that were best-practice services. And what we discovered with that research was that there were huge gaps,” Council says.

One major gap identified was that there needed to be comprehensive, up-to-date, sex education in schools. “The environmental scan of Omaha area schools showed there was a huge gap. That those who were providing some form of sex education and, in particular Omaha Public Schools (OPS), had not updated their curriculum in more than 30 years, so it was outdated, “Council says. With this research and the ongoing conversation and education surrounding STDs, teen pregnancy and sexual literacy, the Women’s Fund established the Adolescent Health Project in January 2014.

The Adolescent Health Project seeks to create community-wide changes through research, with goals to increase the sexual knowledge and health of youth to, in turn, decrease the number of youth engaging in risky sexual behavior, the rates of STDs and teen pregnancy.

With all efforts guided by research and collaboration, the Adolescent Health Project focuses on four priority areas:

• Expand the capacity of clinical service providers to provide access to STD testing, treatment and condoms at absolutely no cost

In May of this year, the first priority of the Adolescent Health Project proved successful, with hops updating and implementing new comprehensive human growth and development curriculum. “We’ve done a lot in a short period of time and I’m just really proud of this team,” Council says.

While the first media campaign launched in January of 2015, the Adolescent Health Project continues to find ways to educate and inform adolescents through creative, informative campaigns surrounding messages regarding sexual health, protection, getting tested and teen pregnancy.

“Research shows that young people who have the knowledge and the information make sound choices about their sexual health and well-being,” Council says. “That’s why our media campaign is so important, parental resources and engagement are so important. Why that youth voice, as a part of our process moving forward, is so important.

“It’s been two years since the launch of the Adolescent Health Project, 12 years since STDs were declared an epidemic in Douglas County, 20 years since Today’s Omaha Woman was launched to raise awareness about issues exactly like this, and 26 years since the Women’s Fund was established in 1990. Progresses being made, and the conversation is continuing. W