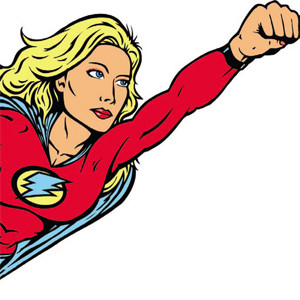 Here’s what I want; Either an inflatable mascot suit or a super-hero costume. Don’t get me wrong, super-ness is not on my bucket list. I mean, even having a bucket list is way too super-organized for me.

Truth is, I just want a super-suit in the event I’m asked to perform feats of strength or become invisible when danger (such as someone asking me to attend a scrapbooking party) is present. If I can’t have a super-suit, then I’m definitely going to Comic-Con in San Diego, where I’ll dress as Cheese Omelet Man, a superhero of my own invention.

As such, I will carry a trident made of bacon and wear a cape. A cape is essential. Only problem is, if you are allergic to eggs or dairy, I cannot help you, and that would be sad—especially if you are a big fan of Cheese Omelet Man and want to meet me. No worries. I’ll email you a PDF of my media kit.

I also want to ensure Cheese Omelet Man helps only the most deserving, because I plan on being a very narcissistic folded-egg breakfast food with a slight accent and an irritating slogan I repeat loudly and often. This means I will have very little time for solving petty crimes and for rainy rescue missions that might make me soggy. Cheese Omelet Man is a bit of an arrogant anomaly, I’m afraid.

While my alter-ego as an egg may strike you as unusual, it is the story of Dorothy Hunter—the Richland, Va. woman who vowed in July to eat only pet food for one month—that has me excitedly clapping my humor-columnist hands.

Hunter told KDNO TV the critter treats she’s poking down were something she “started eating and was like, ‘You know, I could do this for 30 days.’”

Thank you, Dorothy Hunter. I just love people who eat pet food; because, well, they are amusing, and amusing is good.

Even more entertaining: Hunter further described one of the cat foods she’d chosen as “succulent.”

While I love people, I loathe the word “succulent.” Equally horrific descriptors include, “moist” and “ointment.” Oh, and “salve.” I cannot take the word “salve.”

Seriously, don’t you just cringe when a TV voiceover describes a product as “moist?” Really? Who wants that? Paste is moist. Workout attire is moist. Wounds are moist. Good gravy, salve is moist. Gak! You get it, right? Moist is bad. “Moist ointment” is worse, and I’m pretty sure Cheese Omelet Man is moist (in a smarmy sort of way), too.

Instead, why can’t we describe things as “not exactly dry, with a spritz?” This is a nice, polite and safe way of avoiding a word I despise (again, the word is “moist”), while ensuring the general population, who might be wired differently than I am (poor things), still understands the attributes of anything previously described as “moist.”

On the other hand, I could just take to eating succulent (blech!) pet food, and wearing an omelet suit—which would make banishing “moist” a true bucket-list contender.