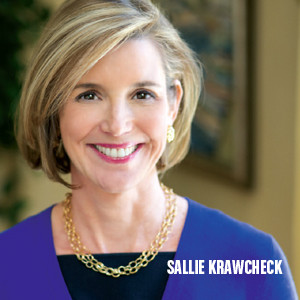 In her efforts to promote women and leadership, Sallie Krawcheck has made headlines on CNN, CNBC, The Wall Street Journal, Forbes, The New York Times, Crain’s New York Business and more. And that’s just this summer.

Now, on October 23, Krawcheck will bring her message to Omaha as keynote speaker for the Women’s Fund of Omaha’s Annual Fall Luncheon.

One of the most successful and influential women on Wall Street, Krawcheck has a unique perspective on women’s leadership in business that is garnering international attention.

“We haven’t made nearly enough progress for an issue that has been so well-researched,” she says about gender diversity. “And the research is so compelling: Gender diversity leads to a higher return on capital, greater client focus, lower risk, greater long-term focus, greater innovation,” she says in an Elle magazine interview. “For a topic that is so well-researched, it is astounding that corporate America, overall, (has) gone sideways.” In fact, she adds, diversity has gone backwards in the financial industry.

Krawcheck has often noted that “investing in women is simply smart business,” and she is putting her belief into practice through ownership of the Ellevate global professional women’s network and launch of the Pax Ellevate Global Women’s Index Fund.

In 2013, Krawcheck stepped up her efforts to promote women in business and leadership with purchase of the networking community 85 Broads, which she rebranded in June as Ellevate. With 34,000 members and growing, it’s the most expansive and diverse network of its kind.

Ellevate connects members through a strong community of accomplished women who are committed to investing in themselves and other women, and it provides resources and tools to help them succeed. The company also believes in investing in companies that are leaders in gender diversity.

In an interview with Forbes, Krawcheck says she originally invested in the Ellevate network to help women move ahead in their careers. “Networking has been cited as the number one unwritten rule of success in business. And not networking can be an important reason that the gentlemen begin to advance ahead of the women at work in their 30s.”

Building on the importance of investing, Krawcheck recently teamed up with Pax World Management to launch an index fund that invests in the 400-plus top-rated companies in the world for advancing women. The Pax Ellevate Global Women’s Index Fund is the first and only mutual fund of its kind.

Among the companies in the fund, 31 percent of board seats and 24 percent of executive management positions are held by women, compared with an 11 percent global average for each. The holdings include Aetna, General Electric, General Mills, PepsiCo, Procter & Gamble, Xerox and Yahoo.

“When women are economically engaged, our community is much larger,” Krawcheck said in a CNBC interview.

Krawcheck has earned numerous recognitions for her work. She was recently named number nine on Fast Company’s “100 Most Creative People 2014” list and one of “10 Up and Coming Leaders to Watch” by Entrepreneur magazine. Krawcheck has been consistently listed as one of Forbes’ and Fortune’s “Most Powerful Women” in business and U.S. Banker’s top “Woman to Watch,” and she is a past recipient of CNBC’s “Business Leader of the Future Award.”