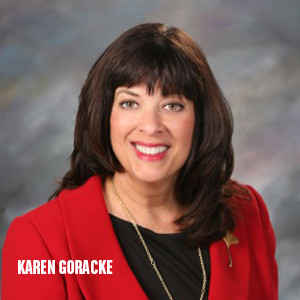 Karen Goracke, president and chief executive officer of Borsheims Fine Jewelry and Gifts, credits much of her success to the company she works for. She started straight out of college in 1988, moved up through the ranks, was afforded the opportunity to leave for six years when her three boys were young, and then to return without losing any ground. “I took this break and I didn’t even miss a step in the race,” she says. “I didn’t have to start all over again, which is a remarkable story, and I know not a lot of women have had that happen.”

Goracke’s rise to the top began in Borsheims’ gift department after graduating from the University of Nebraska at Kearney (named Kearney State College at the time), where she completed a double major in business administration and organizational communication. “I wasn’t really thinking about a career in retail, but I thought this seemed glamorous and that it would be a fun place to work,” says Goracke about taking the position. “I just wanted to work at the best place in Omaha,” she adds with a grin.

Goracke moved up quickly to inventory specialist the following year, when Berkshire Hathaway purchased the company. The first order of business requested by the new ownership was for Borsheims to implement a “real” inventory system. “I shot my hand up and said, ‘I know how to do that,’” Goracke recalls. She had worked at an accounting firm all through college, where she developed a variety of skills and business practices. At the time, Borsheims’ inventory was recorded by hand, using a 10-key calculator. “That’s when I learned about inventory,” Goracke says. “I learned everything about every piece in the store!” She jokes that she personally tried on each of the retailer’s tens of thousands of pieces of merchandise while developing the new system.

When Goracke left the company in 1998 to care for her family, she was the jeweler’s watch buyer. In the fall of 2004, when her youngest was starting preschool, Susan Jacques, her predecessor, offered her an opportunity to work part time, during the holiday season, and she took it. That January, the ladies jewelry buyer position came open, and, after a great deal of discernment and discussion with her husband, Goracke stepped into that role full time. Just nine years later, when Susan Jacques announced her decision to leave Borsheims after 30-plus years to head up the Gemological Institute of America, Warren Buffet named Goracke the next president and CEO of the company “I think there is a culture of teaching and mentoring here,” Goracke says, crediting Jacques for her example. “Susan was a huge mentor for me.”

In addition, she says, Erin Limas, Borsheims’ chief financial officer, also taught her a great deal about merchandising during her years as inventory manager. She taught me so much. You gain that confidence and then you are ready to go take that next challenge,” Goracke says. “That’s what I hope I’m doing with my team and will continue to do in my new role. I consider myself successful at managing people, if they end up better than I am. That’s when I know I’ve done my job. They should be able to dance right around me.”

Two guiding principles Goracke holds dear in business are to make sure she gives others the same opportunities that have been given to her; and to always behave in a way that makes her proud. “I think there’s a big difference between being embarrassed and being ashamed,” Goracke explains.

“Every working person in the world makes mistakes. I’m not afraid to make a mistake, but I hope that I’m never ashamed. There’s a big difference between those two words.”