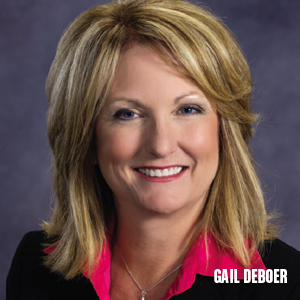 Women’s Fund Luncheon Co-Chair: Be Patient in Climb to the Top

Patience, education and trust are themes that Gail DeBoer, president and chief executive officer of SAC Federal Credit Union, attribute to her success. “Some people think you just jet to the top, but you need to be patient and you need to learn a lot,” she advises. “This is not an easy job, so you don’t want to get it too early.

DeBoer’s path to her current position as president and CEO of Nebraska’s largest credit union has included a series of solid, steady steps—although not in the traditional manner. She did not earn her four-year degree straight out of high school and then go on to a master’s program. She didn’t know what she wanted to do, so she worked as clerical support at the Omaha Royals for two years. “I quickly figured out that I’d better go to college,” DeBoer says with a laugh. She spent 11 years earning her Bachelor of Science degree in business administration at UNO while working full time for InterNorth (which merged to become Enron in 1985). “It’s not what I recommend, but you shouldn’t put limits on yourself. Education is important and nobody can ever take that away from you,” DeBoer stresses.

DeBoer left Enron in 1988. “That was a really tough decision,” she says. “It (Enron) felt like the place I would retire from.” But she followed her gut feeling, which urged her to make a change. That change led her to SAC Federal Credit Union, which has been her career home for more than 26 years.

She started as an internal auditor with one employee under her charge. “I worked hard as an auditor to get to know every area of the credit union, which was a real benefit,” DeBoer says. In 1994, she was promoted to senior vice president of operations. “I went from managing one part-time employee to managing all of the branches!” Her goal to become CEO spurred from a comment by a co-worker that she could be president of the credit union some day. “It just hadn’t even dawned on me, but that did cause me to think, ‘Well, if I was going to do that, then what would I need to do to prepare myself?’” she recalls. When the SVP position opened up, applying was her next logical step.

“Whenever I had one job, I was always looking for the next career move,” DeBoer says. “But I had to be very patient; none of my moves came quickly.” During her 16-year tenure as SVP of Operations, DeBoer was given a five-year heads up that her predecessor would be retiring. “I decided I would do everything I could to be as prepared as possible,” she says. “It didn’t mean I would get the job, but I wanted to have it all ready to go when the position opened up.” So she earned her Master of Business Administration from Bellevue University online, allowing her to juggle work and family. “I had three kids at home who were all very active,” she says, “and I didn’t want to miss any of their events.” She completed an 18-month program over the course of three years—one class at a time.

“Balance is hard,” DeBoer says. “Anybody who says they’ve got that all figured out, I don’t believe it!” She credits her husband for his constant support, and her own ability to keep her priorities in line. “This is what I do; it’s not who I am,” she states definitively. “I would give this up in a heartbeat if my marriage or my kids suffered because of my career.” She and her husband, John, have been married 33 years.

Eventually the CEO position did open up, and she was ready. After one year as executive vice president, DeBoer transitioned to president and CEO of SAC Federal Credit Union in 2007. “The previous CEO really supported me in the process,” DeBoer says. “He was willing to go out and say, ‘She’s the one.’” DeBoer had earned his trust over the 17 years she worked directly for him. “He was willing to go to the board and make that statement because he knew he could trust me to do a good job—that’s sponsorship,” she says, adding she has had many good mentors and supporters throughout her career. “That only comes from trust,” she reiterates. “If somebody is going to go out of their way to recommend you or give you something, they have to know that you will do a good job.”

“I have an amazing team,” DeBoer says repeatedly of her own success and that of SAC Federal Credit Union, which has grown from $290 million in assets to over $730 million under her charge. Her next goal? To reach $1 billion. “There is no doubt in my mind we’ll get there,” she boasts.