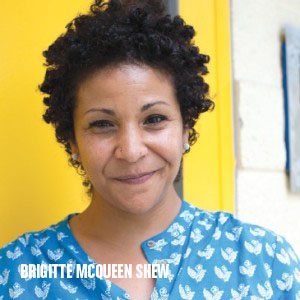 Brigitte McQueen Shew’s ultimate dream job, from childhood to present, is to be a flamenco dancer. She hasn’t made it yet, but her career has danced with poise and passion from advertising to publishing, culinary arts to commerce, gallery curator to nonprofit executive director.

Originally from Detroit, Shew has lived in Omaha for nearly a decade. She has a journalism degree from New York’s St. John’s University and a chef certification from The Art Institute of Seattle. Her first career job was as assistant to an account executive in advertising. The New York agency did campaigns for Broadway and dance companies and came with amazing cultural perks, but the work wasn’t fulfilling. Shew then made her way into publishing at Time Inc., where she was a production manager, helping develop and launch Teen People. She was there 10 years, until the publication folded in 2007.

Next came Omaha and Pulp, a lovely “high-end stationery shop that included a gallery space dedicated to contemporary works on paper,” she says, adding Pulp was part of the early revitalization of Benson before its move to the Old Market passageway. Shew was happy and the shop performed well — but not well enough to survive 2008’s economic strife. She regrouped, masterminding a position as manager of the Bemis Center for Contemporary Arts Underground.

“I approached the former executive director with a proposal for turning their under-utilized basement into a gallery space for local artists,” she says. “My motivation was a sincere love of Omaha’s arts community and a desire to support it.”

That love further impelled Shew toward her current gig, founder and executive director of The Union for Contemporary Art. “In 2011, I was given an amazing opportunity to create a nonprofit to expand upon my desire to support local artists — while making an impact in the North Omaha community — another aspect of this city I am passionate about,” she says. “I knew nothing about starting or running a nonprofit when I started, and am still learning volumes every day.”

Shew says she never really thought too much about the arts before coming to Omaha, but quickly found herself interacting with artists, collecting work and cherishing contemporary art forms. “After Pulp I knew that I wanted to continue working in the arts, but make an impact in my community. I wanted to do more than make money for myself and the artists I worked with. The nonprofit, or ‘for purpose,’ path, just seemed like the perfect fit for me.”

Along her career path she has assembled a quirky cache of talents and experiences. Her very first job, in high school at a party supply store, made her a pro at creating giant balloon sculptures. “I can make just about anything out of balloons,” she says. “Arches, giant hearts, palm trees — you name it, I bet I can make it.”

Of Teen People she says, “I often refer to my time there as the decade I spent pushing bad music and fashion on the youth of America — but I really learned a lot and gathered some stellar stories about ‘90s teen celebrities that still make me a hit at parties.

“I believe that I’ve learned something valuable from every job I’ve had that’s been a benefit for the one that followed. Even the utter failures have been important and helped me to become a stronger, more passionate person. I have learned that I am resilient and resourceful.”

McQueen’s professional advice for others is simple: “Make it happen.” She relishes living without regrets, buoyed by the richness of her experiences. “At the end of my days, I’ll be able to look back and know that I did everything I wanted to do. That, plus knowing I made a difference in my community, means more to me than anything. The risks are real, and often terrifying, but completely worth it,” she says. “Give yourself the freedom to live the life you want to live.”

It’s a wonder Shew has packed so many professional experiences into her 42 years. But she’s not done yet, and her “someday” endgame is as spectacular as everything that’s come before it. “I plan on opening a bakery somewhere remote and beautiful — like Montana or the Boundary Waters in northern Minnesota — where I just make pastries for fishermen.”