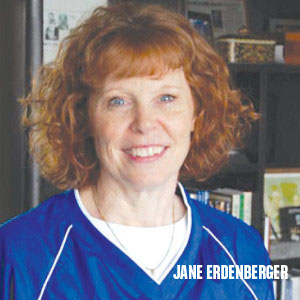 As an 8th grader in 1967, Omaha native Jane Erdenberger recalls being riveted by a “60 Minutes” show about lawyers fighting to protect their clients’ civil rights. Caught up in the meaningful spirit of the times and backed by her mother’s Feminine Mystique-inspired urging that she go into what was then a nontraditional career for women, she decided she would go to law school so she could one day “fight for the underdog.”

Her career began in textbook linear fashion: She graduated from Westside High School, earned her BA in history at UNL, and headed straight for George Washington University National Law Center. In between her second and third years she was a summer associate at Kutak Rock and was then offered a position straight out of law school. Perhaps her first career reinvention occurred when instead of pursuing civil rights law she was hired by Kutak Rock to practice “structured finance” and “tax exempt bond” law. Like clockwork she was asked to join the partnership in 1983. Her stable, enviable career path had panned out very well, and she enjoyed many aspects of her work.

“I liked the fact that I was working with really smart people,” she says, “[I liked] that we had to structure complicated financial transactions to meet all of the needs of the various parties and draft detailed documents that reflected all of their intentions, that I made a very good income and could afford to travel extensively and take wonderful vacations with my daughters and husband, and that being a lawyer—especially at Kutak Rock—was a prestigious job. It was challenging and I traveled all over the country closing deals and solving financial problems.”

But by the late ‘90s she was ready for a career change. Erdenberger remains grateful for her time at Kutak Rock, but she couldn’t contain the urge to redirect back to her early dreams of making a difference in the world.

She went back to school at UNO, seeking her BS in education, and eventually resigning from her partnership in December 2000. She began student teaching at Omaha North High Magnet School, graduated from UNO in Spring 2001, and was hired by OPS to start teaching the following fall at North. She currently teaches Honors Human Geography, Ethnic Studies and African American History.

There were many positive outcomes to her professional reinvention. “I have always loved learning and was excited about having to learn lots of new material in order to be able to teach it. I really like teenagers and wanted to work with students who were facing particular challenges that would require that I always be on my game,” she says. She also has a good friend who runs an academic program in Oxford, and for the past 12 summers Erdenberger has taught there, as well. Spending summers in Oxford was a welcome element of her transition. But, with all of the plusses came a few scattered minuses.

“I assumed that when I took an 87 percent pay cut, I would gain some free time,” she says. “I could not have been more wrong—I have never worked this hard before!” On top of actual teaching time she also spends four to six hours nightly grading and prepping. She also notes the comparative lack of support systems a teacher has versus what she had as an attorney and does miss the more flexible schedule of her former career.

But fueling the desire for education in her students far out-weighs all of that—not to mention everything she learns from them. “Best of all is that I have learned so much from my students about the lives they live—so different from mine—and their strengths and resilience, interests and challenges. I have learned dances and slang and the importance of shoes. I have tried to be as involved as possible in the North Omaha community and I honestly feel that it makes me a much more grounded person.”

Erdenberger doesn’t think she’ll have another career transition, but someday we may get the chance to “see Jane run.”

“I do imagine running for political office after I retire. I am very active in Democratic politics and would love to make policy differences on behalf of my students,” she says.

Erdenberger values all of her experiences as important parts of the whole. “I think my original instincts might have been right—I love the challenge of the law and the satisfaction of making a difference,” she says. “I just ended up doing it in two parts of my life.”

I miss you & your gems of wisdom. I THANK YOU AND SALUTE YOU, I owe you, I cherish the book you sent me after high school AND REAL history you gave me a glimpse/taste of to do further research on. Ma’am… Mrs. Jane Erdenberger… I thank you & hope all is well w/ you AND yours, thank you for your sacrifice. Stay at it, keep feeding that mind, body, & spirit. Mental and/or spiritual nourishment. You are a treasure to be commended… Much respect, I appreciate you.