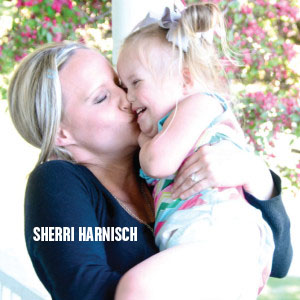 Sherri Harnisch Reinvents Herself After Birth of Second Child

Sherri Harnisch, previously a successful media planner/buyer for SKAR Advertising, wore the “Working Mother” title with pride. Her return to work after the birth of her first baby, McKenzie, was seamless. She felt confident and secure about her day care provider. “I loved having that work/home balance and I expected that our second child would be the same,” she says. “When Macy was due to arrive I had the same expectation that she would be born, I would take eight to 10 weeks of maternity leave, she’d go to the same day care as her big sister and I would go back to work.”

But in the silence of the NICU with nothing but the rhythmic beeping of machines, Harnisch faced an unforeseen uncertainty. “Our pregnancy was by the book just like our first pregnancy had been,” she says. The news that her second baby, Macy, has Down syndrome was a shock. “The moment Macy was born, everything changed,” Harnisch says. “We were forced to pause, take many deep breaths, and simply reassess and reevaluate all our personal, professional and spiritual priorities.”

Down syndrome is a genetic condition in which an extra copy of the 21st chromosome results in both physical and intellectual disabilities. “I didn’t know what to expect,” Harnisch recalls. “I just knew that special needs require a lot of work but I didn’t know what that extra work would entail.”

Harnisch extended her maternity leave to 12 weeks, giving her time to make decisions and get Macy’s health up to par. She returned to work part-time at three days a week. “We scaled my client list back a bit and adjusted my office hours on the days that Macy had therapy appointments,” Harnisch says. “They’re a very family friendly company.”

So upon returning to work, Harnisch assumed that arrangement would continue long term. “But then after about six months, something happened. I just can’t explain how I was feeling. I wasn’t happy,” she recounts. “When I was at work I was thinking of home and when I was at home I was thinking of work. And I just didn’t feel that I could do my job the way that I wanted to do it,” she says, tearing up as she remembers the sleepless nights spent making the decision to take a break from her career. “My mind was telling me one thing, my heart was telling me another,” she says. “Joe and I made the decision to listen to what our hearts were telling us, for once.” They knew there would be financial sacrifices but were confident it would be worth it.

The stay-at-home mom role wasn’t enough to satisfy Harnisch’s need to be busy and creative, though. Armed with a bachelor of arts degree in journalism with emphasis in broadcasting, advertising and public relations, she fell into more than one business venture and vocation. “Though it was not part of the plan, I did find myself, accidentally, starting up a couple little side businesses,” she says. “Sherri Harnisch Picture Taker and Sherri Harnisch Video Maker were born!”

Her photography skills soared as she captured every moment and milestone with her two girls on film. Soon, friends and relatives were asking her to photograph their families. Harnisch found it necessary to begin charging to justify the cost of child care. So, eventually, she wrote a business plan and started a photography business. “Right now, I’m slammed with 180 dancers,” she says. “I just took on my first dance studio.” However, she plans to scale back to about three shoots a week. “I am so grateful and feel wonderfully blessed to have this opportunity to do what I am truly passionate about and actually get paid for it.”

Her other part-time job came by surprise as well. The communications director at her church, Bethany Lutheran in Elkhorn, offered her a position that enables her to use her creative talents to develop video presentations for worship and other events. The offer came with an office, flexible hours and another opportunity to be paid to be creative. “Arranging for child care while I attempt to work outside the home is a challenge but the reward is that it keeps me busy,” she adds. “I am blessed to be busy and it is a fulfilling busy.” Another bonus: She is able to schedule work around the needs of her family.

Work aside, Harnisch also volunteers her time and expertise to the Down Syndrome Alliance of the Midlands, the National Down Syndrome Society and Special Olympics. “I am thankful for the impact that our daughter Macy’s extra chromosome has had on our family and everyone around us,” Harnisch states. She hopes that her active involvement in these Down syndrome organizations will help to empower as well as educate others of the potential that individuals with Down syndrome possess. “I am proud to serve as my daughter’s voice,” Harnisch says, “but, it is my dream that soon she will utilize the power of her own voice to advocate for the needs of herself, as well as others.”

Harnisch is grateful to have been on a significant spiritual path when Macy was born. “Upon hearing those words, ‘Down Syndrome’, it made me think, ‘aha,’” she says. “It was the saddest moment of my life, yet it turned out to make my life better. It was just sad because it was surreal and I didn’t get it.” Now, she definitely gets it.

As someone who’s worked closely with Sherri for many years, I can tell you she’s as genuine as they come. She was great in the workforce, but just as amazing (if not more) at home. Plus she’s an excellent photographer!!