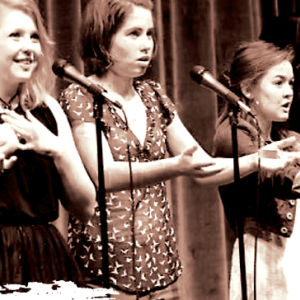 ‘Louder Than A Bomb’ Gives Teen Writers a Platform

When the teenage girl starts to speak into the microphone, it’s immediately clear that what she’s saying is very personal. Her passion and pain are almost palpable as she “slams” rather than recites the heartwrenching poem she wrote for this competition.

Hers is a story of loneliness and isolation, detailing how she eats lunch alone every day, despite being surrounded by hundreds of kids in her high school cafeteria.

She is just one of dozens of teens who competed in “Louder Than a Bomb” this past spring. The youth poetry festival pitted high school students from across Nebraska against one another in an annual poetry slam. This year marked just the second annual event, sponsored by the Nebraska Writer’s Collective. The first competition attracted 12 schools; this year there were 19 competing in the preliminary competition, semi finals and finals.

Topics explored in the poems range from love, dating, hip hop and friendship to bullying, race relations, living with violence, being true to yourself and more.

Matt Mason, executive director of the Nebraska Writer’s Collective, says he was surprised and pleased by every aspect of the competition. “Most surprising was how good the students were,” he says. “It takes a lot to not only write the piece, but perform it live in front of an audience. They were all very good.”

Mason estimates crowds at around 200 for each preliminary event, and about 500 at finals. “The community support for this festival has been phenomenal,” he says, adding it would not have been possible without a few key sponsors who provided financial backing.

Each high school has a teacher leading its efforts, as well as a professional coach, paid by the Nebraska Writer’s Collective. The coach — who has experience in poetry slams, writing and performing — provides training to students and support to the teacher for the couple of months preceding the competition.

The inspiration for a teen poetry slam in Omaha came from Chicago, which has had one for more than a decade. When Film Streams showed the documentary, “Louder Than a Bomb,” local interest grew. “The film was so popular, they showed it for an extra week,” Mason says.

When philanthropists Paul and Annette Smith approached Mason with the idea of doing a teen poetry competition in Omaha, the dream began to become a reality. “Without their help it would have all been much smaller.” Instead, so many people showed up to see the first slam, the events moved to larger venues this year to accommodate larger crowds.

A slam is different than a simple poetry reading, Mason says. “It means the poet has to reach the audience and make them feel like they are part of the show. The performance is definitely part of it.” Slams are so interactive that the audience is often on the edge of their seats, cheering like they are at a basketball game.

The goal of the competition is to get more people interested in poetry and creative writing, Mason says. “It creates a safe space for them to say what they want to say, and be listened to and responded to positively. Students get to find the words to tell their stories and get comfortable with that.”

“This year was fantastic,” Mason says. “The talent of students in our area is truly something special. They continue to address issues and events in thoughtful and funny ways, really processing emotional content beautifully.”

Look for the next Louder Than a Bomb competition in spring 2014.