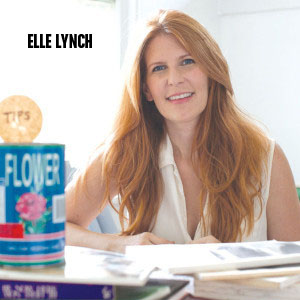 Elle Lynch’s career choices may appear divergent at first blush, but they are united by her desire to create. Lynch grew up wanting to become “an archeologist and suffragette.” While she never got into either of those fields (although one can always be a suffragette at heart), her career experiences have been just as varied and exciting.

The 34-year-old, who has called Omaha home since 3rd grade, had her very first job walking beans and de-tasseling corn. She later earned a BA in History from the College of Charleston, and her first career-level job was as a writer/editor for an alternative newsweekly in Charleston, South Carolina.

Lynch says she loved everything about the job: “the fast pace, the research, the loose, hilarious camaraderie of the office, writing, interviewing interesting people, exploring new parts of the low country, stirring the pot. It was great.”

In Omaha, Lynch is perhaps best known as the proprietor/chef/mastermind of Daily Grub, an excellent vegan restaurant that was housed just south of downtown Omaha and grew out of an earlier eatery project called Clean Plate. Farm-to-table and sustainable food sourcing figured heavily into her ethos. Lynch says the motivation to start Daily Grub was largely due to her experiences as a journalist in Charleston.

“I spent a lot of time writing about food politics,” she says. “Food is a big deal in Charleston — a big, big deal — and the slow-food movement is an important part of the food culture there. I was meeting growers and chefs. When I remember it now I realize what a lucky moment it was. It was my 1920s Paris moment, but instead of Gertrude Stein and Hemingway it was Mike Lata and Celeste Albers. When I came back, I wanted to do something to start that conversation here. So the Clean Plate opportunity presented itself and then Daily Grub.”

Nowdays, Lynch goes by the title “designer/idea maker,” a fitting catchall for her latest professional reinvention, which is anchored in creating welcoming spaces — of all kinds — that are as aesthetically pleasing as they are functional. Last year she worked as set decoration buyer on Oscar winner Alexander Payne’s latest film, Nebraska.

“When the movie opportunity presented itself I was grateful for the chance to explore another passion,” she says.

She’s also doing creative consulting for various businesses, dipping into interior design and branding on both large and small scales. Most recently she designed interiors for The Trap Room, a new bar in north downtown Omaha.

She says the transition to this from chef/restaurateur made seamless sense to her and those who know her well.

“It’s something I’ve been doing since I was little,” she says. “I would spend hours designing my Barbies’ homes and offices and restaurants and places for them to go. I never actually got around to playing with the Barbies. Clean Plate and Daily Grub were just as much, if not more, about the environment as about the food. Creating environments and experiences has always been the thing I’ve loved to do most.”

Lynch’s professional advice for other women is to reach fully for their dreams. “Tell all of those nagging doubts and insecurities in your head to zip it!” She emphasizes that there is no wrong path and “not [to] place so much pressure on yourself to choose the ‘right’ path. You learn something on every road. Follow the one you feel in your gut. If it doesn’t work out … recalibrate.”

Lynch won’t entirely rule out another future professional evolution, but says it’s unlikely. Aside from the obvious dream of being a rock star — “I get to pretend when I’m jamming out in my car,” she says — she feels she has landed on her dream job.

“This is it! Realistically, my dream job is anything that allows me to be creative, work with my hands and see a tangible result,” she says.

However, if she could fuse her professions into one enterprise she is certainly open to that idea.

“Designer, writer, chef is a pretty great trio of professional experiences. I’d love to find a way to have them work together. Maybe a B&B someday in some tropical paradise?”

As Lynch has proven, a girl can — and should — dream.