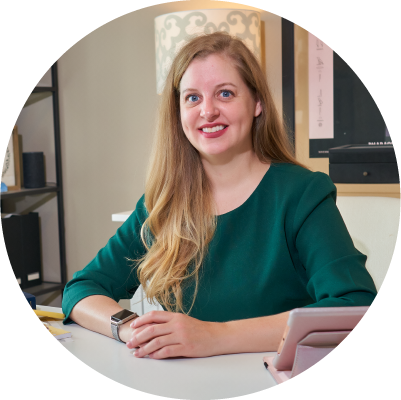 Building Bridges in the Legislature

It’s fitting that Nebraska State Senator Wendy DeBoer’s last name means “the farmer” in Dutch. Not only is she an avid gardener who shares a large plot with extended family (they’ve produced a 96-pound watermelon), she also has deep roots planted in the community. In 2018, DeBoer was elected to represent Legislative District 10, which serves parts of northwest Omaha and Bennington and includes her childhood home.

“I represent all the neighborhoods I grew up in—Maple Village, Tomahawk Hills, all of that,” she says. “It’s really neat that I got to knock on the door of the house I grew up in and ask the man who actually bought the house from my parents to vote for me. He ended up putting up a yard sign of mine in the front yard; we put it up together.”

There are many such stories. For instance, when a 94-year-old constituent associated the name DeBoer with a high school shop teacher from 75-plus years ago, who happened to be DeBoer’s grandfather. Or another time, after speaking at a homeowners’ association meeting, when DeBoer was approached by a woman whose son had been her kindergarten classmate.

“She told me she was going to vote for me. She said, ‘Because my son hadn’t made any friends in kindergarten, and one day he came home and said this little girl named Wendy became his friend today. You were Mark’s first friend.’ Those are the kinds of deep ties to the neighborhood that matter to me,” DeBoer says, adding that she likes shaking hands and knocking on doors.

DeBoer says her ties to the area she represents helps “put the faces to” her work in the Legislature. “It brings me to the constituents . . . It’s a great honor to be able to represent that group of people.”

“I don’t think everything goes in a straight line,” she says. “I practiced law for a little while in Kansas City, and I taught at UNO, in the same building that my grandfather, on the maternal side, had taught in.”

DeBoer taught composition classes at UNO in the early 2000s for a handful of years before going to seminary and then teaching at DePaul University in Chicago. She then taught at Syracuse University and Wells College in New York.

“In fact, I was the religion department at Wells; it was a small, small school. That was fun because I was able to teach a wider variety of classes,” she says. “It stretched me, which I liked, and helped me to learn as well. You don’t learn anything as well as when you’re teaching it.”

People sometimes tell her they don’t see the connection between law and religion, DeBoer says, but she has encountered a fair number of lawyers who went to seminary and clergy or other religious leaders who went to law school.

DeBoer has been involved in church activities her entire life.

“I had wanted to go to seminary in college, but honestly, in the mid-‘90s it wasn’t as common for women to be pastors, even in my tradition, which is the Lutheran tradition. I was discouraged by people from following that path,” she says. “But I was given a great piece of advice by one of my friends and teachers who was a great mentor of mine. She told me if my calling is to become a pastor it will keep calling.”

Eventually, she heard another call: to serve as a Nebraska State Senator.

“It was kind of a partisan time and it was a time when we were becoming more and more tribal—it arguably still is—and I was concerned people weren’t listening to each other anymore, that we had lost our ability to reach out to each other,” she says. “And I thought, ‘somebody ought to do something about that.’ You can say that only a few times before you start doing ‘that.’

“I felt a call to this work . . . I had all this experience and people had poured all this effort into teaching me things; and I thought maybe I could take these skills and give back to my community and try to be a bridge-builder in the Legislature. And that’s what I’ve tried to do.”

DeBoer’s assignments have included the Judiciary, Rules, Transportation and Telecommunications, and Long-term Restrictive Housing Committees. She also has a special interest in schools and families.

“I have always been a big advocate for schools. Education runs in my family; we’re farmers and teachers all the way back,” she says. “And I’ve spent a lot of my own life in education. I really try to work to make sure we have strong schools available for all the kids in the state.”

A bill she introduced, LB 485, called for changes in provisions relating to child care assistance. It was passed into law this spring.

“I myself don’t have children, but I have nine nieces and nephews who I love dearly and am very close with,” she says. “It’s important to me to have bills like 485 that allow kids to be safe and taken care of well, and at the same time help their families to get support they need to build a better life for themselves.”

The changes in law make it possible for more taxpayers to claim a nonrefundable income tax credit for qualifying contributions that promote quality child care programs in Nebraska, DeBoer explains.

“I would encourage people who have not been eligible in the past to apply. There are a lot more people eligible than there used to be,” she says.

“So, (it’s) helping folks to build that opportunity and to have that chance to work and chance to prove themselves in their work, taking a slightly higher-paying job or working a few extra hours, without losing that childcare subsidy.” The workforce benefits, too, she says. “There’s no better way to help the workforce than to help mothers who would like to work and fathers who would like to work, but child care is very expensive and sometimes people need a little help to get them started, to get them off on the right foot.”

Seeing the fruits of her labors from her service in the Nebraska Legislature has been rewarding, DeBoer says.

“I hope that I can not only bring good legislation and pass it, but do it in a way that helps us work on our process and our culture within the Legislature. I hope to help our already great nonpartisan culture continue to flourish, that we sit down with each other and continue to work on things together and get back to the fundamentals—and show everyone why Nebraska should be so proud of being the only nonpartisan unicameral in the nation.