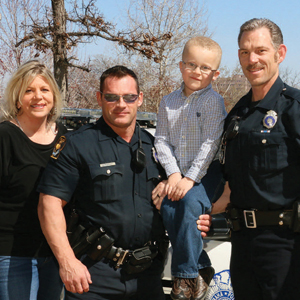 From stalking and violence to survival and moving forward

When I came to, there was an eerie silence, even with the alarms blaring,” Jacey Gengenbach recalls of that Sunday morning in November 2012. She had been severely beaten in the presence of her 3-year-old son by an ex-boyfriend who had been stalking her every move the week before. “My house was swarming with police,” she says. “It was a crime scene.”

Jacey’s abuser hounded her the week before with incessant calling, texting and stalking. She was leaving work when she finally answered a call on Friday, Nov. 9. She had learned through 10 years of this on-again offagain relationship that ignoring his calls and texts were more dangerous than giving in. She called it “damage control mode.”

“Where the f*** do you think you’re going?” he growled over the phone. “What do you mean?” she responded. “I see you getting into your black Tahoe in the parking lot,” he shot back.

“I felt it in my gut,” Jacey says, recalling the sinking, creepy feeling of being stalked as she unsuccessfully scanned the area to locate him. “I knew something bad was going to happen; I just didn’t know what.” She agreed to meet him at a neutral location to avoid having him show up at her house. Damage control mode kicked in. “I learned over time to do whatever I had to do to keep him happy and keep myself from getting hurt,” she says. Jacey placated him and told him everything was fine between them to keep herself safe, but drove straight to a police precinct afterward. Unfortunately, threats of harm were not enough to warrant police action.

Protection orders had been filed at different times over the years, but her abuser would hold them up in front of her face and toss them into the air saying, “You think a piece of paper is going to keep me from getting to you?” Jacey recounts. He continuously tormented her in ways that would instill fear without subjecting himself to any repercussions. He would always be gone by the time police arrived. Something felt different this time, though. Jacey sensed impending doom.

Saturday morning, she called 911 hoping for help and documentation. She thought if they responded to a call, they would file a report. But again, her proof of threats from voice messages and texts did not result in an official report. “They did seem to be a little more concerned,” she recalls. As a way to document the verbal abuse, Jacey used the non-emergency report line to file a report on her own. Even so, she was beginning to feel her situation was an emergency, as her day became filled with non-stop threatening calls and text messages.

The next morning, she saw her abuser’s van pull into her driveway, prompting an immediate call to 911. “Never once did I think I would not be protected by the police,” she says. “Never once did I think I would not be safe in my own home with all the safety measures I had put in.” All doors were locked with dead bolts, and the house was wired with a first-rate security system. But her false sense of safety crumbled as she watched her abuser crash his vehicle through her garage door that Sunday morning while on the phone with 911 dispatch. This prompted her to call a second time, desperate for police presence. Officers had been dispatched but their arrival was too late to intercede. Her abuser quickly stormed into her home, leaving her no time to escape, and beat her unconscious with brutal punches and kicks to the face and head. “I know he only stopped because he thought I was dead,” Jacey says. “I almost lost my life in front of my son.”

Tristan, Jacey’s son from a previous relationship, was not physically harmed but he did witness the assault. The offender attempted to flee but was apprehended by the first officer on the scene, Chris Leick from the Omaha Police Department (OPD). Officer Jerry Kassen accompanied Jacey to the hospital and stayed with her until an advocate was appointed. “I am still in touch with both of them to this day. It does not stop once the arrest is made or once the case is closed,” she says. “They are forever in our hearts and we are forever grateful.”

Several other officers, advocates, prosecutors and community response personnel also rallied to support Jacey and her son from that moment on. “I’m still in touch with every single one of what I termed ‘our helpers,’” says Jacey of her community support network. “It truly takes a village to pick us (victims of domestic violence) up and get us to where we need to be; where we’re not just surviving but we’re living and we’re thriving.”

Whenever Jacey tells her story, she stresses the positives along with noting the gaps in the system that need to be filled. “There are pockets of people doing really  great things,” she reaffirms. “But there are things that need improvement.” The Domestic Violence Council (DVC) is dissecting her entire case from start to finish to identify problems and find solutions. “The DVC has been that organization to help create change to fill those gaps and make things go better for the next person,” she says. “It gives me hope.” Hope was hard to come by in the months following her assault. With every turn there was more bad news. After paying for house repairs from the damage caused by her abuser, she diligently covered one medical bill at a time. “I remember when I got the full treatment plan and the costs,” Jacey says, “I laid my head down on the desk and just bawled.” Two years of surgeries and treatments to repair her broken jaw, nose, teeth and lip was not in the budget, even after insurance coverage. “I was going further down into the trenches. It was hard: my son, court, medical, dental, and just the mental and emotional aspect of it all,” she recalls.

Another blow was to find out that her abuser’s case could initially only be charged as a misdemeanor thirddegree domestic assault. Nebraska courts interpret the Felony Domestic Assault First Degree Statute to require a “permanent physical injury.” Jacey’s extensive physical and emotional trauma did not qualify. Broken bones heal. For a third-degree assault conviction, Jacey’s abuser’s maximum sentence would be six months. Since Nebraska’s good time law then cuts that in half, it was possible that Jacey’s abuser would serve only three months. She was devastated. “Where is the offender accountability in that?” she questions.

But everything changed when one of her teeth couldn’t be saved and had to be pulled. The dead tooth was the permanent injury needed to shift the charge to first-degree felony assault. Jacey’s abuser was sentenced to 21 years and eight months to 25 years for domestic assault and terroristic threats. On February 25, Jacey testified before the Nebraska Legislature in favor of LB 307, a bill designed, in part, to close those injury and accountability gaps in Nebraska’s current Domestic Assault Statute.

Jacey first went public with her story in January, 2014 with the encouragement of Karyn Spencer, her advocate from Family Legal Project. She credits Spencer with creating the Team Jacey Facebook campaign and Red Basket fundraiser ‘Save Jacey’s Smile’ that brought overwhelming community support. Red Basket is a nonprofit organization that helps individuals raise money in times of personal need. “The financial burden had been alleviated because of the generosity of my team,” Jacey says. “My team has grown now to have an international reach; some of these people are perfect strangers. I have truly been blown away by all of the support.”

Jacey’s message to other victims of domestic violence is that they are not alone. “I want them to know it is ok to ask for help,” she says. “There are people out there to support in any way possible.”

Although telling her story is emotionally draining, there is a healing that comes from it, Jacey says. “My strength comes from my son, my parents, and all of my supporters cheering me on; and the fact that I don’t want anyone to ever experience what I went through. I am here to pay it forward.”