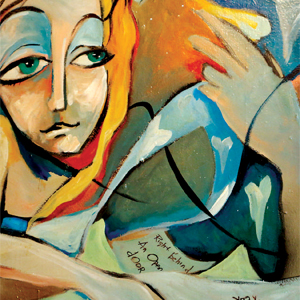 A commercial break for the Super Bowl this year opens with a woman’s voice ordering a pizza over the phone, address first. The 911 operator tells her repeatedly that she’s dialed 911 emergency. As she continues to order the pizza, the camera pans the inside of the house—furniture is misplaced, books are tossed about, there’s a hole in the wall. The 911 operator catches on that she’s not really ordering a pizza but is in danger and can’t talk. He assures her that help is on the way and asks if she can stay on the phone. She says “No, I’ll see you soon, beeeeeeeeep.” As the line goes dead, the screen dramatically cuts to black with the following message in white block letters: WHEN IT’S HARD TO TALK, IT’S UP TO US TO LISTEN. HELP END DOMESTIC VIOLENCE AND SEXUAL ASSAULT. PLEDGE TO SAY NOMORE.ORG.

Twenty years ago statistics showed that one in three women would experience some form of intimate partner violence in their lifetime. Yet two decades ago, this Public Service Announcement would not have aired during the Super Bowl. Fast forward to 2015, and domestic violence prevalence stats have unfortunately stayed about the same. So has anything really changed? The WCA defines domestic violence as a systemic pattern of abusive behaviors (psychological, sexual, physical, and/or economic) used by an individual to establish power and control over his/her partner. The abuser is able to maintain power and control through fear and intimidation. Statistics show that women are 90 to 95 percent more likely than men to suffer domestic violence and the most dangerous time is when the victim tries to leave the relationship. “That’s when homicides happen; usually after they leave or upon leaving,” Richardson says. “Now we know a lot more about that dangerous time.”

When a victim calls the WCA crisis hotline or is connected with an advocate through law enforcement or health care systems, the first order of business is a safety assessment, Richardson says. “The key to the hotline and to helping the victim is having the advo-cate there,” she adds. “It’s like turning the light switch on. A lot of times victims don’t even know how dangerous a situation they are in.” Once the lethality is determined through a series of questions, the advocate helps her to develop a safety plan that reduces the risk to herself and her children.

The availability of advocates is key to women successfully and safely navigating their way out of domestic violence and through the legal process. Two years ago, the WCA added eight full-time advocates to its staff, up from only three. WCA and local law enforcement are working together to increase the number of victims who are offered advocacy services. WCA advocates worked with 3,989 victims last year—an 81 percent increase from the 2,209 victims served in 2013. “We now get all domestic violence reports from the Omaha Police Department. We call every single person,” Richardson says. “We offer services and try to connect them with an advocate.” She estimates about 20 percent of victims contacted accept help at that time. “If not that day, then they’ve got our name and our number when they are ready,” she says.

Yet these kinds of services require funding. In 1994, when Congress passed the Violence Against Women Act (VAWA), federal funding streams created opportunities for communities to impact the landscape of domestic violence. The Women’s Fund of Omaha seized the opportunity to make a difference in the metro area. They formed a domestic violence task force and published a research-based report outlining recommendations that would align Douglas County judicial and service agency processes with VAWA funding requirements. “This idea and research became the impetus for forming the Domestic Violence Coordinating Council (now the Domestic Violence Council), whose mission is to end domestic violence in our community and hold key players accountable,” says Michelle Zych, Women’s Fund of Omaha executive director. As the Women’s Fund celebrates its 25th anniversary this year, Zych is proud to report the organization has invested more than $520,000 in its fight against domestic violence in Omaha to improve the lives of women and girls.

The community responded collectively to enhance victim services and reduce the number of intimate partner homicides from a yearly average of seven or eight in the late 1990s to two or three currently in Omaha. “Because of service and funding streams and the system holding perpetrators accountable, we’ve been able to save a lot of lives,” says Tara Muir, Domestic Violence Council (DVC) executive director. “Victim safety and holding offenders accountable are the two main focuses of VAWA and the work we do at the council,” Muir says, adding that one of the ‘best practices’ that came from VAWA was to create a Community Response Team (CRT). Led by DVC staff, the Douglas County CRT brings representatives from 14 different service agencies, victims units, prosecution and law enforcement together monthly to build trusting relationships between community partners, open lines of communication and solve problems as they arise. “The basics of a community response team means prosecutors get what they need from law enforcement, probation gets what they need from prosecutors and victims always get what they need in terms of safety,” Muir explains. A smaller group also meets regularly for high-risk case reviews.

“Two or three years ago we looked at what needs to change within the court system to help victims stay safer,” Muir says. The main barrier uncovered was the two-to-three-day delay in protection order approval. CRT members met with the presiding judges to expedite the process if the perpetrator was in jail, so he could be served prior to release.

Legislation also tops the list of DVC concerns. “One of the big things we work on is to try and fix the holes in the statutes,” Muir says. A big focus this year is LB 307, a bill designed to clarify language in the stalking statute and close penalty gaps in the domestic assault statute. “We are hopeful it is on its way to passing.”

Significant issues within family court—including custody and child protection cases—are DVC priorities as well. “Oftentimes people who experience these crimes are facing multiple systems,” says DVC Data and Evaluation Coordinator Michelle Patterson. In addition to the criminal abuse case, victims may also be battling divorce and custody conflicts. “There are many insurmountable obstacles for victims if the right services and approach to these cases are not present,” she says. LB 437, the joint custody bill, is legislation that would create even more obstacles for domestic violence cases in family court, according to Muir. “We are working to be sure that doesn’t happen,” she says.

Another project the DVC has taken on is to coordinate with service providers, law enforcement and judicial systems to move toward standard data collection and reporting systems, so effectiveness in victim safety and offender accountability can be more easily measured. “The overall message about data and statistics is that our agency encourages the system and all of the players to use it to look at themselves and to know if we are making a difference or not. Are we holding offenders accountable? Are we moving in the right direction? But you can’t do that without an accurate representation of what’s happening,” Patterson says.

The number of arrests for protection order violations has increased in recent years as well. “This is good,” Patterson says. “It means victims are reporting the violations and police are responding and arresting people for it.” The number of domestic violence offenders placed on probation and those ordered to attend a Batterer’s Intervention Program (BIP) have also increased in recent years. “But we’d still like that to rise higher,” she adds.

Douglas County’s approved BIPs are based on the nationally accepted Duluth Model for Batterers Intervention Programs. They are 36 weeks in duration for 90 minues each week with a set curriculum. Most providers call them men’s non-violence groups, but there are groups for women with violent tendencies as well. Judy Seeman, independent mental health practitioner and owner of JLS Counseling, leads several groups weekly with about 10 to 12 clients in each group. “The majority are court-ordered,” she says, “and they come with a thousand and one excuses. It is a challenge, but something I think is really necessary.” Oftentimes, abusers have multiple short-term relationships. “By helping one man to change his behavior, you can increase the safety of three or four women,” Seeman says. “That’s why I do it.” Seeman stresses that domestic violence is all about power and control, not drugs, alcohol or even anger management. “It’s never the victim’s fault,” she says. “Domestic abuse is always about the batterer.” She works diligently to teach her clients to take responsibility for the actions they choose to take. “I have discovered that a lot of the guys are just missing something. They need the power and control so they can feel better about themselves.” She tries to reach them on that level to invoke a change.

“They can change, absolutely,” Seeman says. “It’s not easy and sometimes it can take quite a while, but it is possible.” She has clients who have remained non-violent for more than 10 years, who still call and check in occasionally. Accurately tracking the effectiveness of the programs is difficult, though. Clients and victims generally don’t respond to surveys or follow-up calls.

Richardson agrees that it is difficult to say how effective batterer’s intervention programs are long-term. “What we do know for a fact is that she (the victim) is safe while he is going to those groups,” she adds. The nine months that he is held account-able by the courts gives the victim the opportunity to build a support network and get the help she needs to make healthy choices for herself. “We’ve tried to integrate our self-sufficiency programs with the advocacy,” Richardson says. “You have to treat the whole person and the whole situation.” Services range from access to the clothing closet to legal assistance, from victim support groups to empowerment therapy, from self-sufficiency and career advancement guidance to education. The WCA worked with nearly 13,000 clients last year — a 70 percent increase from 2013.

This increase in services provided does not indicate an increase in domestic violence, according to Patterson. “We would see an increase in police incidents or 911 calls if this was the case, and these are not present.” Instead, Patterson views the increase as a good sign that more people are reaching out for help.

“The opening is there and we are kind of on the brink of this thing,” says Richardson about the mission to end domestic violence and sexual assault. “We understand the long-lasting implications of continuing violence in Omaha, but on the other end we see the hope that is there.”

Her advice to friends and family members of victims stuck in the complicated cycle of domestic violence is to listen, and to believe them. “No matter how many times they go back, don’t desert them,” Richardson pleads. “That is what they need to do to keep themselves safe. Their gut tells them when it’s right. And we just have to be patient with that.”

Richardson says her staff hears the words, “Thank you for saving my life,” from past clients at least once a week. “There is hope. There is great hope,” Richardson repeats. “These are real people going through real circumstances, but it will turn around for them.”