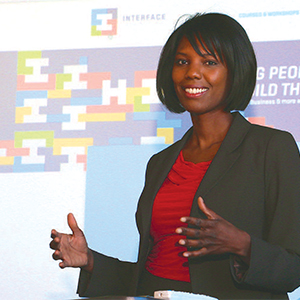 Don’t be surprised if you see Shonna Dorsey, cofounder and managing director of Interface Web School, rocking out to Metallica in a blazer at your local karaoke bar.

“I have one huge hobby and that’s karaoke,” Dorsey says. “If you ever see me during the day in my little meeting dress and blazer, I will wear that to karaoke and sing Metallica and it is hilarious. ‘The Black Album’ is my favorite one.” Karaoke might be her  one escape, because Dorsey seemingly lives and breathes to code. She’s spearheading the creation of an army of web developers right here in Silicon Prairie. When she’s not facilitating free introductory web development workshops at local libraries, she might be meeting with a potential Interface student. She also hosts a meetup group “Omaha Coffee and Code,” a stimulating session held monthly that features guest speakers on a variety of topics germane to all things IT.

In 2013, Dorsey was approached by Mark Hasebroock of Dundee Venture Capital with the concept of starting a coding boot camp in Omaha. “There was a journey of exploration and looking at the needs in the market,” Dorsey says.

The University of Nebraska Omaha graduate already had a full-time job and was comfortable in her career, but the idea of a code school made sense to her. “When you are passionate about something and you see the opportunity there, you make decisions that may not make sense to others, but it did make sense to me.”

Dorsey hit the ground running. She began creating partnerships with other organizations. As part of the student training, they built applications for non-profit organizations. She also went out into the community and did free introduction workshops on basic internet code languages, such as HTML and CSS, at Omaha Public Libraries. Eventually that led her to do training at places like Prairie Cloudware and Flywheel.

Those partnerships have made a big difference. “It allowed us to give a basic understanding of what web development is to a lot of people who may not have otherwise experienced it.” So far more than 100 people have attended Dorsey’s workshops.

In 2014, Interface Web School had 30 graduates. Spring 2015 will see another 30 graduate. “Within 30 days of graduation, 73 percent of our students have been placed, so that’s a really great number for us,” she says.

Graduates of the program benefit from a lifestyle shift. One student made $8 an hour before attending Interface. After graduation, the same student now makes more than $40,000, Dorsey says. The average starting salary after graduating from Interface is $46,000.

One big change Dorsey has noticed is the interest from women. Her first class consisted of all men, but today women make up about half the Interface classes. “There have been a lot of efforts locally and nationally to target more women and minorities in tech. I’m pretty active out in the community, so I definitely try to meet people where they are and show them that yes, I’m a woman; that I’m doing this and I’m teaching this class and we offer this training,” Dorsey says.

Classes run for 11 to 15-week sessions, meeting a total of 9 to 12 hours a week in the evenings. Groups are kept to a manageable number of 12, so that instructors can get to know students. “If the student is having a little bit of trouble, it’s easier to have the rest of the students working on something and then give the individual the attention they need.”