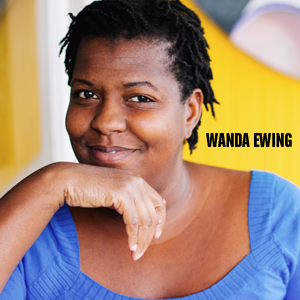 This past December, Omaha lost Wanda Ewing, a talented and beloved painter, printmaker and associate professor at the University of Nebraska at Omaha. An artist in her prime at age 43, her unexpected passing cast a canvas of sorrow and surprise on the Omaha community.

But her life was not just defined by her artwork. To those who knew her, Ewing’s charismatic and warm persona exuded honesty, dependability and originality. As authentic as one of her paintings, she was a friend to many, including Brigitte McQueen Shew, founder and executive director of Omaha’s The Union for Contemporary Art. From the moment the two met in 2001, Shew says, their 12-year friendship was a “brilliant one.”

“Whether you had known her for years or just met her in passing, she stuck with you—her smile, her warmth, her personality all left a lasting impression on you,” says Shew.

The truth in that statement resonates with many Omahans. From her students, friends, family and colleagues, to the art community as a whole, Ewing and her work left a lasting impression.

“No one was doing what Wanda did when she started showing her work in this community. No one,” Shew says.

Ewing’s inspiration appeared endless. It’s no surprise her original and innovative touch was not limited to a single paintbrush, nor any specific art supplies. She seemed to express her creativity through almost every facet in her life.

“In so many ways, her work and her life were so connected that it was sometimes hard to distinguish the two or tell which was inspiring the other,” Shew says. “I believe her creativity was endless because she was creating work that was of her…it was based on her life, her loves, fears, insecurities, happiness, dreams and beliefs.”

Ewing’s creativity extended beyond her personal and professional art projects to the University of Nebraska at Omaha, where she was an associate professor of art and art history.

Gail F. Baker, dean of UNO’s College of Communication, Fine Arts and Media, describes Ewing’s absence as “still raw and very painful.” Yet, she says, the college will continue to feel her impact for years to come.

“Her students, who will go on to impact others, learned from her to bring honesty and a sense of fearlessness to their own art,” Baker says. “Wanda’s colleagues are changed as well—we learned from her that you can chart your own path while respecting the perspectives of others.”

Ewing’s UNO legacy lives on through the Wanda Ewing Memorial Scholarship Fund. Established by the UNO art department through the University of Nebraska Foundation, the scholarship fund has seen an “immediate outpouring of support from the entire community to raise funds that would help students,” Baker says.

“Wanda was completely devoted to her students and learning. Her legacy should represent that passion.”