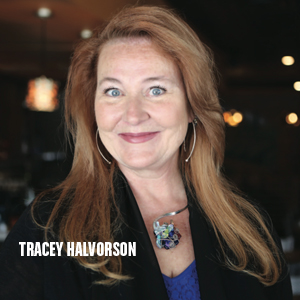 Tracey Halvorson of Omaha was 10 years into building her own business and in her mid-30s when her marriage began to fall apart. “My divorce was financially devastating to me,” she says. “I found myself at the bottom of a black pit and I was very confused about my way forward. I was very afraid.”

The divorce was the right decision for her, she says, “but I was questioning what I needed to do about owning a business as a single parent.” She had surrendered all other assets in the divorce to keep her business and her son. “It would have been much less frightening for me to take a job with a salary and set hours and be able to count on a regular paycheck.”

Halvorson owns an Ameriprise Financial franchise, which is her dream come true. An Iowa State graduate, she taught high school for a few years right out of college, and then ventured to find her next challenge. She leaned toward attending law school but then her dad encouraged her to consider the Denver School of Financial Planning. “I took up the challenge and completed my designation and became a certified financial planner,” Halvorson says. “That program is what solidified for me that it’s not about the money. What’s really important is for the financial part of your life to fit in with the goals and dreams of your life.” Those values are what carried her through many difficult years.

After her divorce, friends and associates pushed her to move to a job with more stability—one that was more traditionally suited to a woman because it would be easier, she says. “A regular salary and a benefits package was tempting, but the closer I came to making that choice, it never felt comfortable to me,” she recalls. “It was a mismatch. It didn’t fit me.”

She started having the same conversations with herself mentally that she’d been having all those years with her clients. What are your dreams? What do you want to do? What are your priorities? What are the things that bring you most fully alive and bring you the most joy?

Her answers were easy, she says. She loved raising her son as a single parent with the flexibility that owning a business afforded her. She could drop her son off at school in the morning and leave the office after the market closed at 3 p.m. to pick him up. Andrew didn’t even notice that she wasn’t a stay-at-home mom, she says, laughing. “I worked when my son was at school. And when he was not at school he was with me.” After bedtime, Halvorson would pull out the briefcase and work several hours into the night. “But he never saw that,” she adds. “And he didn’t need to.”

Another priority was that she loved running her business and building a practice that stayed true to her own personal values. “There were things that I could’ve been doing at the time that would’ve made a lot more money, but it was never about the money for me,” she says. And she finds that it’s not really about the money for her clients, either. “It’s about finding the investments that fit them and fit their lives.”

She stayed ahead of the paralyzing fear that comes with being a single parent in tough financial times by focusing on two central themes: “One is joy and the other is gratitude,” she says. About a year after her divorce, Halvorson was in the kitchen crying as she prepared breakfast. “Andrew came in and he said, ‘Mom are you going to cry every day?’ and it stopped me in my tracks,” she says. At that moment she decided that she didn’t want to be the mom who cries all the time. She decided to be a joyful person. She wrote the word ‘joy’ everywhere and picked up small inexpensive trinkets with ‘joy’ on it whenever she could. “I had ‘joy’ all over my house, in my office, my car and my phone!” It was one of the baby steps she took each day as she navigated through scary financial periods. Now even her mother calls her Tracey Joy, though Joy isn’t her given middle name.

For entertainment, Halvorson and her son enjoyed long bike rides together and visited Joslyn Art Museum on free days. “We did things that cost little or nothing,” she says. “The things that are free are the things that make life worth living!” Both she and Andrew love the outdoors. Vacations for them were road trips coupled with campouts. “We traveled coast-to-coast together,” she beams.

Tight financial times did not suck the joy out of life for Tracey Halvorson or her son, Andrew. In fact, they both flourished. If she had it to do over, Halvorson says, “I wouldn’t take out the hard parts or the challenges because I’ve learned so much about myself.”