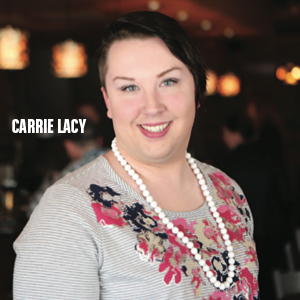 Learning from past mistakes

Carrie Lacy grew up receiving mixed messages about money. “My mom was, and still is, frugal. My dad is someone I would consider ‘spendy.’ His bills are paid…but he spends the extra money in his account. He doesn’t really save,” she says. “So when I was younger, my mom would try to encourage me to save and plan, and my dad would take me shopping. It wasn’t really a consistent message.”

Lacy, now 29 and a professor of Sociology & Anthropology at Iowa Western Community College, got her first job the summer she was 15—a hot, smelly post sweeping up litter in the zoo’s Pachyderm Hill zone. She quit after just nine days.

“I quit because it was hot and gross, but then my paycheck came in the mail and it was actually really good money for a 15-year-old. I regretted quitting,” she says. “Since then, I’ve had several jobs that I worked for a few days to a few weeks, quit, and regretted quitting. It [was] a pattern I had until my mid-20s.”

Lacy now sees this pattern as evidence of the inconsistent messages she got regarding money as a child.

“I knew I had to work, but I also felt like I just had to work long enough to make enough money to get by until the next job rolled around,” she says. “This isn’t a great strategy, by the way!”

Lacy made many common mistakes when beginning her adult financial journey, including credit card debt and bad student loan choices.

“I racked up credit card bills starting at age 19,” says Lacy, who used credit cards for things like furniture, clothes and eating out. “I took out student loans, not just to pay tuition, but to also supplement my income.”

For several years, when living with a boyfriend who had a good income and covered essentials, Lacy worked as little as possible. Aside from what he covered, the couple spent on credit—all of which was in her name. When they split up, all of the bills went with Lacy and it took her another two years to pay off a debt she hadn’t incurred alone.

But at the end of that relationship, Lacy was buoyed by feelings of triumph at reclaiming her own financial stability.

“That was about four years ago, and those feelings are something I often reflect on,” she says. “When I started to take on my own financial independence, I felt so much better about myself and what I was doing.”

After several years of rebuilding, Lacy feels like only recently has she begun succeeding financially. Still, she says she will be paying on those student loans “for a long, long time.”

“My goals now are to build my savings and 401(k). I finally started doing that about six months ago when I got what I consider a ‘grown up’ job,” she says.

Lacy advises young women to work hard, plan for the future, avoid non-essential credit card or loan debt, and to “protect your credit score like it’s your own child.”

“When I look back, these are the things I didn’t do,” she says. “I can look at my financial situation today, which is stable but not ideal, and see that these were the areas in which I went really wrong.”