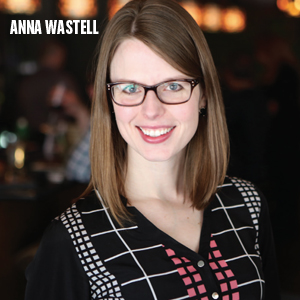 Anna Wastell’s parents gave her a small allowance from an early age—and that’s when she starting saving. “Ten percent went to the offering plate at Sunday school, 10 percent went in our savings, and the rest was ours to spend or save,” she says.

Wastell’s parents had a “relatively meager income” but took advantage of coupons and smart spending to stretch the family’s dollars.

Wastell started her first job at 16, making beds and washing dishes once a week at a local bed and breakfast. Perhaps due to the sensible example set by her parents, she was always intuitively “good” with money, but that wasn’t always entirely purposeful, nor was personal finance an area that interested her.

“Despite not really knowing how to build a budget for my own life, I attempted to keep my checkbook balanced and never carried any credit card debt,” she says. “I’ve always had a strong credit score, although I didn’t know it until the FreeCreditReport.com commercials were popular.”

Even though she avoided debt as a young woman (even graduating college free of student loan debt, through a smart mix of savings, grants, scholarships and work study), and took the initiative to negotiate her salary and ask for raises, Wastell slipped into financial habits that, to her, were subpar.

“Once I started using a credit card for the convenience factor, I stopped tracking my expenses,” she says. “I knew generally how much was in my checking account and didn’t spend more than that each month, but I spent almost everything [in checking] and saved hardly anything. Looking back, I should have been more intentional about both tracking my expenses and saving money.”

When Wastell met her now-husband, Chad, he encouraged her to track her expenses with Mint.com.

“After I had a few months of spending habits under my belt, I built a budget that loosely fit my previous spending, but with intentional goals for saving money, too,” she says.

When the couple married, they created a joint, forward-thinking budget.

“My Starbucks budget got cut drastically at that point, unfortunately,” Wastell says. “But the system we’ve developed together allows us to give generously, save responsibly, and even enjoy date nights and the occasional vacation.”

While Wastell’s early financial story isn’t perfect, it’s head and shoulders above so many other young women who accrue debt and face major financial pitfalls in their 20s and early 30s.

Her advice for young women just starting out: “It can seem tough to live without credit card debt, but it is doable. Despite my own habits in my 20s, it is possible to go to Target without spending $100 every time. And definitely sign up for a 401(k), especially if your company matches. The idea of saving money doesn’t seem very sexy in your 20s, but I’m learning more every year how important it really is.”