Life Skills for the Real World 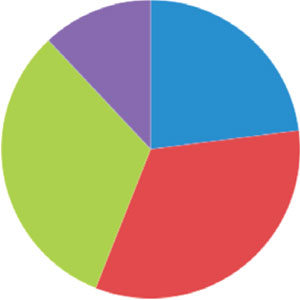 Breaking the Cycle of Poverty

We have been rated No. 1 in a list of the top 10 cities to raise children, one of the best cities for jobs, and best among the nation’s 100 largest metro areas on key economic indicators during the Great Recession.

Yet while Omaha receives accolades for being a great place to live, not everyone in the city reaps the benefits. More than 90,000 citizens in the eight-county Omaha Metropolitan Statistical Area (MSA) have incomes below the federal poverty line, and more than one-third of those living in poverty are children.

“How Are Women Doing in Omaha?” — a recent Women’s Fund research report — found striking racial differences, with the African American population having a poverty rate that is nearly four times that of whites. Women are consistently more likely to have income below the poverty line, regardless of race or ethnicity. Among the findings:

While poverty can be defined by federal poverty level guidelines (for a family of four, it’s $23,050 annually), self-sufficiency standards are another indicator.

“Poverty is just the inability of a person or family to meet their basic needs,” says James Goddard, director of the economic justice and healthcare access programs for Nebraska Appleseed Center for Law in the Public Interest.

“We need to ensure that folks have an opportunity to reach for things like education that will allow them to move ahead,” Goddard says. Nebraska Appleseed works for systemic change, such as creating or modifying policies. Over the past few years, the Lincoln-based nonprofit has advocated for changes to the Aid to Dependent Children (ADC) program so people “can pursue education as their work activity, if they so choose,” Goddard says. The agency has also focused on the Bridges Program, which combines credit courses with basic education. A basic math class, for instance, might be combined with an introduction to nursing class with a goal for participants to obtain a CNA certification and start earning wages.

The nonprofit agency Together defines extreme poverty as 30 percent or below the Douglas County Area Mean Income. Krissy Madej, development and marketing director, says there are 66,521 households in the tri-county area earning an income under $21,450, and Together supports approximately one-third of those families. The main obstacles Together’s clients face are finding sufficient housing and adequate child care, lack of education and/or employment and inability to pay for medications.

“Many of our clients are from families where the head of the household is working two-plus jobs to create enough funding to get by each month,” Madej says. “A lot of our clients do not have any type of savings to fall back on in case they need their car repaired, or a medical bill comes up or the furnace breaks.”

Often, clients don’t know where to turn for help. “Together navigates to get our clients the resources they need to qualify for certain assistance and to dig deeper to understand the root of the problem so we can have our clients become housing stabilized,” she says.

Poverty doesn’t discriminate, Madej says. “Everyone is susceptible to poverty. It does not have a certain zip code or geographic area; it’s a problem in all areas of Omaha. You never know who could be in trouble, who is working two or more jobs, who is in need of nutritious food each and every day, who was just handed a three-day notice, or who just got laid off and now needs to provide for their family.”

The Empowerment Network routinely tracks and reports on the state of African Americans in North Omaha, and Willie Barney, president and facilitator, says that the most extensive poverty levels are in single family households led by women with children under 18, especially in African American groups.

Unemployment is a growing issue in Omaha, especially in certain Census tracts, and it’s one of the contributors to poverty, he says. Home ownership, education and marriage rates also are factors.

Barney notes there is a tremendous gap in earnings potential when you look at people without high school diplomas, with high school educations and with college degrees, and the Women’s Fund study supports this.

All of these factors are interrelated, he says. Without an education, it’s hard to get a job that provides the income needed for home ownership.“

Generationally, you do not see wealth being transferred when you look at families in poverty,” Barney says, attributing this in part to low homeownership rates. For African Americans in the Omaha MSA, this rate is 38 percent, versus an overall rate of 69 percent in Omaha.

Education, employment and home ownership also affect marriage rates, as people are less likely to get married without a sustainable living wage income, Barney says, adding, “the fundamental thing we have seen over and over again is when you have a large number of African American men who are unemployed or underemployed, there is a tendency for them not to get married.”

This has an impact on women and children. African American families with a single mother average $20,000 to $22,000 in income, compared to married couples in Omaha who average $60,000. “There is a huge difference when you have just one person bringing in income,” Barney says.“

Many times people have this vision of women (in poverty) at home and not working,” he adds. “A lot of women in poverty are working. The wages they are making aren’t enough to bring them out of poverty, or they aren’t getting enough hours.”

The Empowerment Network focuses much of its attention on employment, and it works with other organizations to link young men and women to opportunities. One example of such a collaboration is Step Up Omaha!, which started as a summer job program and is expanding to a year-round program with 120 work sites. Participants also have the opportunity to take classes to help prepare them for longer-term employment.

Struggling with utility bills and facing shut-offs is another challenge families in poverty face. Tonya Ward founded the nonprofit Energy Rescue Inc. after learning firsthand what it was like to have her electricity and water shut off. She lived three months without water, using a hose to fill her bathtub with water from a neighbor’s house and buying bottled water for her infant son.

Ward was one of the first borrowers who received a $1,500 microloan through the Omaha office of Grameen America. She uses her personal experiences to educate others on how to navigate utility shutoffs and obtain assistance. Energy Rescue Inc. has since expanded to also focus on sustainable living, including home weatherization, clean solar energy options and growing your own food.

The Empowerment Network’s focus is on facilitating and collaborating with residents, community-based organizations, churches, schools, elected officials, governmental agencies and businesses on a common vision of improving education and employment.

Barney says the collaborative efforts are showing results—reading and math performance is going up, graduation rates are improving and the number of students going to college is increasing; new homes are being constructed and gun violence is declining. “We are seeing some progress in key areas, but we have a long ways to go as a community,” he says. With data showing progress, though, people are seeing improvements are possible. “We can really, truly close some of these long-standing gaps that have been here for decades. Working together, we can make Omaha a great city in every zip code and neighborhood.”

He encourages the public to get involved in these efforts by taking simple steps, such as becoming mentors, joining Adopt-a-Block programs and neighborhood associations, and supporting businesses in North Omaha and other areas where poverty is concentrated.

Nebraska Appleseed’s Goddard says the agency works to ensure that programs such as the Supplemental Nutrition Assistance Program (SNAP) and ADC are as effective and helpful as they can be.

“The reality is we have a lot of folks in Nebraska, working families, who are food insecure. Despite working hard, they cannot make ends meet,” he says. The Nebraska Appleseed report “How Our State Measures Up for Working Families,” found that one in four Nebraska jobs is in an occupation that pays below the poverty level, and 50 percent of jobs in the state are in occupations that pay below $30,000 annually.

“Nebraska must grow quality jobs in order to remain economically strong, and we must turn workers seeking opportunities into the workers of the future by maximizing existing job training programs,” the report says.“

Our ultimate goal is to help end poverty, and I think the key to that is education,” Goddard says, noting that this includes a focus on adults as well as youth.

The Metro Home Base, a centralized access point for people to be referred to the agency that can best serve their needs, is another example of how collaboration is working. A woman in need of rental assistance, for instance, can call Home Base, where an employee will determine which agency in the continuum can best serve her. In this case, the woman could be referred to Together or another agency that provides rental assistance, Madej says.

Community education is key to addressing the issue of poverty, Madej adds. “It is hard to wrap your mind around what is going on within our city. However, it starts with wanting to learn more and then putting it into action by volunteering, donating and advocating.”

[…] Goddard, Appleseed’s Economic Justice Program Director, spoke to Today’s Omaha Woman about the issue of poverty in Omaha and how increasing educational opportunities can help people […]

This issue of Today’s Omaha Women is informative and full of great research and possible solutions. I wanted to mention that there is no mention of people with disabilities. I am an older woman with disabilities and I have been trying to get a decent job for a while now – my disability is part of the reason why I am unable to get a job. I am about to complete a training program from Metro in medical office, medical coding and billing. Because I am in the certificate program even the school is discriminatory, I can not get an internship through the school nor am I allowed to take the medical office class that prepares you for software used in the healthcare field. I am at a big disadvantage because this is a career change for me, I sometimes regret my decision to take this path. I am utilizing Nebraska Office of Rehabilitation, but they have postings of jobs but they do not have any affiliations with businesses to help recently trained people with disabilities get their foot in the door.