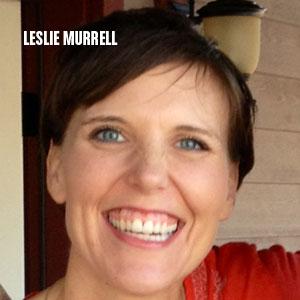 Leslie Murrell has found peace amid the storm of her busy life. The native Texan is wife to “the coolest guy ever” and mother to their 10-year-old twins. Also a blogger (at momontherocks.com), writer, columnist, administrative assistant, and educator, she just couldn’t help but add “financial pro” to her cache of roles.

But she wasn’t always so money savvy – an aptitude she attributes largely to Financial Peace University (FPU), where she was once a client and now serves as a facilitator.

Financial realities impact children long before they’ve earned their first dollar, in terms of their environment growing up and also their future financial psychology.

“Aside from several other issues, the root of my parents’ marital demise stemmed from money fights, [exacerbated by] a direct financial hit on the oil industry in Houston in the ‘80s. They tried to budget, but it was just too hard. I didn’t learn much at all about money as a child other than, ‘We can’t afford it.’ So, I learned not to bother to ask for much,” says Murrell.

When she arrived at college she was greeted by the credit card company bandwagon. Like many freshmen, she was entranced by this source of “free money” and was in debt within two months.

“I had to call my dad. I think he bailed me out because he felt guilty for not teaching me better,” says Murrell, adding that she wasn’t financially responsible until she married her husband.

“He’s always been against using credit cards unless you have the money to pay it off,” says Murrell. “‘If it’s not in the bank, you don’t have the money,’ he’d say. So, we’ve been fairly responsible and not in too much debt. But then I’d start getting some crazy home improvement ideas, or we went travelling and we’d put big purchases on credit cards. Not to mention we have kids. Things just come up. Eventually, we’d racked up some bills.”

The Murrells cycled between in the black and in the red, eventually eager to end the ping-pong progression for themselves and as an example to their kids. “We first heard about FPU in our church bulletin,” says Murrell. “I thought it would be a good idea to take the class because I wanted to be more accountable for my contribution and knowledge of our budget and finances.”

Murrell’s husband Chris joined her, and enrolling in FPU proved a great decision for their family. “We took the class, got out of debt, started growing our savings, and now [we] facilitate the class. Countryside Community Church offers [FPU] about twice a year and you don’t have to be a church member to attend,” says Murrell. “FPU helps people take a good look at where their money is going. “Most people in debt give up, because all they know about their money is they just don’t have it to pay the bills. It’s overwhelming and it’s hard. FPU offers a plan. The plan is simple. The start-up work on a budget isn’t easy, but after a few weeks, it really starts to work. You have to do the work though.”

Murrell recommends FPU for a diverse range of people. “FPU works for single people and married couples,” she says. “Singles tend to not have to be accountable to anyone. The program encourages finding someone, a friend that will help you be accountable to your finances.” On the other end of the spectrum, she says, “Debt and finances are the leading cause of divorce and marital fights, so FPU opens up the dialogue for couples.”

Murrell’s best advice to women in need of financial improvement? “The No. 1 thing I would [say] is to break up with credit cards, and never, ever, ever take out a loan again … make a budget, stick to it. And the cash-only system really works. When you see cash leave your hands to pay for something, you don’t want to let go of it. And when the cash is gone for that budget-period, it’s gone.”

As Murrell says, it’s not easy but the effort pays for itself in spades. “We see a lot of hesitation to give up credit cards,” she says of FPU clients. “But once they do it, the relief on their faces is overwhelming. I bring scissors and a jar of cut up credit cards to every class. Everyone is welcome to contribute to the card jar any time they are ready.”

Murrell calls financial literacy “a constant learning process.” And at FPU the class community really leans on one another to both teach and learn. “We’ve heard [countless] fabulous tips on how to save and make money from people attending the class. It’s like a weekly brainstorming session of how to help each other save money.”

Visit momontherocks.com for a post on FPU. For info. on Financial Peace University, visit daveramsey.com/fpu.