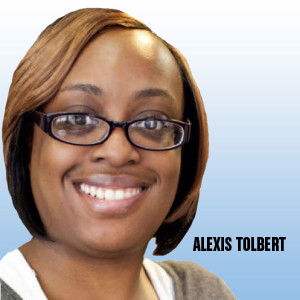 How do you persevere as full-time student, full-time employee, and single parent? With a support team from the Women’s Center for Advancement (WCA) says Alexis Tolbert, 27. She just completed her Associate’s Degree in Criminal Justice and is working toward a Bachelor of Science Degree at Bellevue University. She recently accepted a position at the Sarpy County Juvenile Justice Center as youth attendant. “I am able to exercise my passion and my career at the same time, which is awesome,” Tolbert exudes.

She credits her persistence to the support she found in the WCA Bridges to Opportunity Program. Tolbert grew up in Omaha amidst emotional, mental and physical abuse. When she was 15 her father gained custody, which stabilized their home life considerably. “I think I would have a whole different life if it weren’t for my dad,” she says, thanking him for pushing her through Benson High School to graduation. After high school, she struggled with substance abuse, and lacked focus and direction. At 23 Tolbert gave birth to her son, Javaris, which was a pivotal turning point.

“When I became a mom, I said ‘it’s a new life now,’ and I knew I needed a new start,” Tolbert recalls. In an effort to establish a secure future for herself and Javaris, she placed her son in the care of his father’s parents while she attempted to work full time and attend college, but relationships became strained and that arrangement fell apart. Then, at her sister’s suggestion, she visited the WCA. “My youngest sister had started counseling here and asked me to come to a few sessions with her,” she says. “Her counselor recognized that we had similar issues with our mom and encouraged me to try counseling for myself.”

She soon learned about the Bridges to Opportunity Program, applied, told her story to a group of board members and was accepted into the program. “That’s when I met Tulani, and I fell in love,” she giggles. “I love her. I do,” Tolbert says of Tulani Grundy Meadows, director of Bridges to Opportunity and Tolbert’s assigned mentor. “She is the mom I never had.” Tolbert also works closely with an assigned financial advisor. “When I came here, I was kind of bouncing around, staying with Dad and other family,” she says. “I had no permanent address, and kind of bounced around with employment, with no money management skills at all. I was hanging around the wrong friends, and dating the wrong guys.”

Her support team helped her to assess where she was in terms of housing, employment, relationships and overall self-sufficiency, and helped her make a plan. “I was a little bit shaky in every area,” Tolbert admits. They helped her establish goals to work toward: Bachelor of Science Degree, stable employment, permanent housing, medical insurance and “learning to give myself a little more credit,” she says.

Tolbert’s team helped her to make a time-management plan, devoting certain blocks of time to school, homework, work and her son. “It has helped me to balance my time and not get so overwhelmed with one thing that it takes my focus off of something else.” Another big piece of the program is discovering how to make sound financial decisions. “I have learned to not just get money and spend it!” Tolbert laughs. She is now able to stop and think about the difference between her wants and needs and to invest her money by making plans and saving for the future.

The biggest benefit Tolbert ascribes to the Bridges to Opportunity Program is learning to believe in herself and “knowing that the sky is the limit. You have a support team and it’s OK to rely on them.” This past year has been her toughest. Tolbert lost 12 close family members to illness, old age and gun violence between April and December. “I don’t know how I am functioning but I am,” she says.

She took a compassionate withdrawal from school for two terms but is back on track now. Her support team came to her rescue, she says, by just being there. “They were that shoulder to lean on; that ear to listen. And to know they were there to help me get through this made all the difference,” Tolbert says, “and counseling helped a lot too.”

Tolbert has found encouragement to break old patterns and create new habits that move her in the direction she wants to go. “I have finally found the job that I am comfortable at. I have my foot in the door with a company that has an established success ladder,” she says, confident that she will progress professionally. “I can actually say I am proud of myself and not just listen to everyone tell me how proud they are,” Tolbert says. “I am actually proud of myself.”

This is such a great story. Thank you for sharing