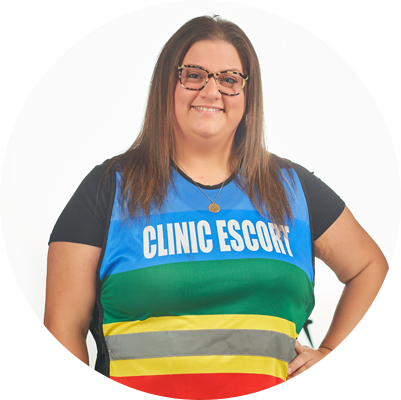 Showing Up to Protect Women’s Rights

How many people give their time to ensure the comfort and safety of others, even when that means facing the very real threat of physical and verbal violence? Thirteen clinic escorts do exactly this at the Bellevue Nebraska Health Clinic, with Shelley Mann as lead escort. Mann has always felt an empathy with a woman’s right to make decisions about her own life, and now protects it with her own.

The atmosphere outside the clinic is intimidating for patients. Anti-choice campaigners line the perimeter with images designed to cause distress and change the minds of women who are visiting. Mann has even seen protestors purposely mislead visitors to the clinic by posing as doctors and escorts, with a goal of delaying appointments because they believe that the longer a woman is pregnant the less likely she is to terminate. These tactics have an air of dogma with a dash of religious fervor.

As Mann explains, “Abortion is older than the church, older than courts. It has existed since birth itself. Records of abortion include the use of teas, herbs and even meditation.”

Clinics such as the one where Mann volunteers have always been a focal point for anti-choice campaigners, but the attention has increased since the pandemic. Mann has noticed that more activists—men and women with time on their hands and perhaps seeking ways to make sense of a seemingly, increasingly out-of-control world—are showing up at the clinic.

Traditionally. escorting was done in silence, but with the pandemic leaving patients without family members or friends to accompany them on their visits, and protestors growing in number and becoming more vocal in their harassment of patients, Mann decided she could no longer remain hushed to their antagonism. Taking to social media to record and share her experience at the clinic, she now has more than 400,000 followers on TikTok and millions of likes. She uses humor and at times ridicule to lighten the tension in what can be a volatile situation, but says she is aware of some similarities between escorts and protestors: Both sides believe they are doing the right thing by their beliefs.