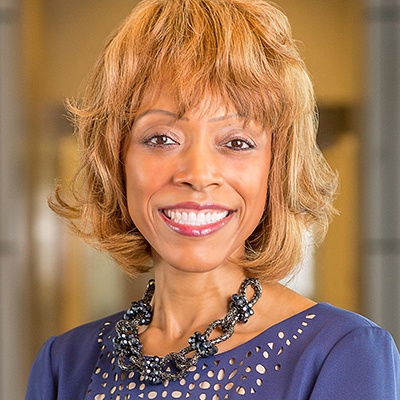 Union Pacific’s Sherrye Hutcherson Advocates for Herself and Others

Sherrye Hutcherson followed her childhood dream to become a vice president in a large company by working hard and planning her strategy early. “I graduated from high school on Friday and started summer school classes at college on Monday,” she recalls. That first day, she made an appointment to see the Dean of the College of Business to discuss her plans. “I wanted to have a job when I walked across that stage after finishing college, so I asked him to tell me what I needed to do to make that happen.” She had planned to major in business, but he suggested an accounting degree would be more marketable for jobs outside of Arkansas. She followed his advice and is grateful that she did. She also took advantage of summer internship opportunities every year.

Now vice president of human resources for Union Pacific Railroad (UP), Hutcherson earned her BS in accounting from the University of Arkansas at Pine Bluff in the town where she grew up to continue a family tradition. “But I knew that I did not want to stay in Arkansas. I wanted to go to another part of the country,” she says. “I wanted to go and spread my wings, make my own way. I love my parents but I wanted to be someone other than Harold and Delois’ daughter.”  Senior year, while many of her sorority sisters were taking trips and going out, Hutcherson spent her free time applying and interviewing for prospective post-graduate employment out-of-state. “I went on interviews for jobs I didn’t even want because I wanted to practice,” she says. Her dedication paid off. Hutcherson moved to Omaha to launch her career in Union Pacific’s corporate audit department upon graduation, in June 1993.

Although she lacked some of the computer skills the recruiters were looking for, Hutcherson’s determination won them over. “I said, ‘Here are all of my extra-curricular activities, here are all the jobs I’ve had. These are all of the accomplishments I have achieved with the help of a lot of people, and my grade point average speaks for itself. If you give me this job, I will learn these computers and I will be up to speed just like that.’” They gave her the job and she followed through, spending evenings and weekends learning the auditing computer program required within the first few months.

After completing many successful audits for UP, Hutcherson shifted gears to work for the Omaha Small Business Network, Inc., managing and developing a loan fund program and helping to develop the tax base in Omaha.  She quickly advanced to executive director of the organization at age 25. Then another door opened for her to take a position at Omaha Public Power District (OPPD) as the business retention and expansion coordinator in 1998. She remained at OPPD, earned her MBA from Creighton University, and worked her way to vice president of corporate services and chief administrative officer. In the spring of 2015, she returned to Union Pacific Railroad in her current position.

“I want it to be more about different perspectives and different ways of thinking and experiences coming to the table. With that you’ll get race and color,” she explains. “If we just focus on race and color, you have all kinds of distortion. But if you focus on the value that is brought to the table when the team is not homogenous that creates a whole different realm of thinking and opportunity to succeed.”

She credits much of her success to her family values and strong faith.  “My path has been intentional to get to the level that I am today, but while intentional it was also purposeful and it was spirit-led,” Hutcherson says. “Ethics, telling the truth, working really hard have always been values to even operate in my family, otherwise you were an outcast,” she adds with a laugh.

Hutcherson learned early on to use her voice to point out gaps in organizations or teams that she was a part of. “I always made sure I collaborated, and ultimately I cared about the people I was working with and working for,” she stresses.  “I believe that’s what leaders do.

“I have negotiated my way up the ladder, whether it was for opportunities to be on special project teams to show what my value was, or negotiation for my compensation. I have always been an advocate for myself in a respectful and meaningful way.” W