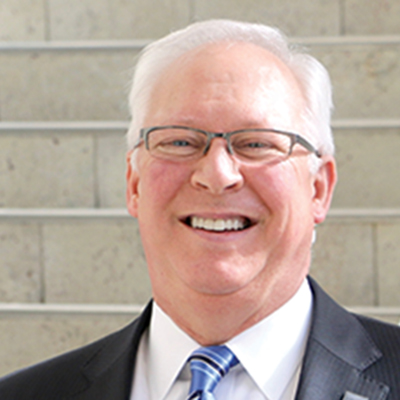 ANTHONY HENDRICKSON TACKLES DIVERSITY AT THE HEIDER COLLEGE OF BUSINESS

In his role as dean of the Heider College of Business at Creighton University, Anthony Hendrickson, Ph.D., looks at the business world from the perspective of an educator shaping the emerging workforce and the next generation of corporate leaders. He also sees workplace dynamics from within, as an employee working in the academic sector. To him, workplace diversity is both an objective to foster for the future and something for today’s employers to continuously examine and strive to improve.

“Diversity is not an easy topic,” he says. “If it were magical, we’d say, ‘Here’s the magical formula’ and we’d fix that. The challenge that I hear most often is trying to find enough diverse talent. We probably are not the most diverse community—this is not like Houston, Texas or Miami, Florida, or an east-coast metropolitan area—the Midwest is generally a little less demographically diverse. So that becomes a basic crux. More important than that, I think, is while people would like to hire people reflecting diversity, the big challenge is finding enough people who have the prerequisite skill sets.”

This high demand reflects a desire to diversify the workforce, which is a positive indicator, but it also means there’s too small a pool of very highly sought-after candidates in many sectors. While that certainly gives those candidates an advantage in their job-seeking efforts, it demonstrates a greater need to develop more candidates in the first place, Hendrickson explains.

“What we have to do, clearly, across the board, is actively try to get diverse people the ‘experience opportunity’ so that we can increase that pool,” he says. “And that absolutely takes time.”

Increasing the applicant pool is a long-term process, and so is improving diversity among leadership teams. But there is good news: The executive track has changed, Hendrickson says, and employees can now more readily seize opportunities to further their careers. When a larger number of people have the opportunity to gain experience, a talent pool naturally increases.

The path to becoming a senior-level executive is not what it used to be. “The stereotype is white guys who go to a bar, have three-martini lunches and play a round of golf. But I tell students, ‘You’re going to be starting out in a company and you’re going to be given decision-making authority over a very, very small part of the operation. And as you demonstrate that you can make good decisions with smaller things, you will be promoted and you will be given more responsibility, and you will be challenged to make bigger decisions.’”

With experience being necessary to learning good judgment, a key factor for anyone to eventually become eligible for leadership opportunities is to pursue education early on.

“How do you give people that experience base? One thing education tries to do is to truncate that process so you don’t have to learn everything by trial and error and bad judgment on your own; you can look at case studies and see what’s happened to other people and sit back and reflect.”

However, he says, individuals must also be willing to pursue real-world opportunities from internships to entry-level positions in the early stages, and to take on new responsibilities after starting a career.

“You can’t replace all experience; there’s no way reading all the books in the world is going to get you there. Business is an applied discipline.”

Another step employees at any level can take to further their careers is to seek feedback and foster relationships with more experienced individuals, both in and out of their career field.

“We always suggest that students—and people in general—try in their careers to identify a mentor, somebody who can give you wisdom about your career and about your decision-making. And they may not even be with your firm; somebody who can give you good, objective advice, that can be a sounding board,” Hendrickson says. “And good mentors aren’t always going to be your cheerleader. Sometimes they’re going to be the person who’s going to have the courage to tell you what nobody else wants to say, but that could be the key thing holding you back.”

It’s important for mentors to be frank with their mentees, which sometimes means it’s best to find someone who doesn’t share the same employer, Hendrickson says. People may be less than forthcoming out of fear of accusations of ageism, sexism, racism, etc. toward a co-worker.

“We all have blind spots as to our own behavior, and it’s those things that may be keeping us back. If nobody says, ‘You’re doing something wrong,’ it may ultimately preclude you from moving up the ladder,” he says. “Sometimes I think that’s often more key for minority candidates—in any field, in any kind of minority situation—because as we become sensitized to diversity, whatever the diversity we’re looking for, oftentimes within the organization we’re hesitant to be critical of people because we don’t want them to leave. We don’t want them to take it the wrong way.”

Hendrickson studies many corporations, smaller businesses and organizations as part of his work as an educator, and feels that it’s not uncommon for area employers to deny that diversity—especially at the leadership level—is a problem.

“I’m going to defend the people who say that it is not (a problem), because I think that sometimes they interpret it as ‘leadership here is racist.’ When somebody says, ‘Do you think we have a leadership diversity problem?’ and they say no, I think sometimes what they’re really responding to is, ‘Do you and the people you interact with intentionally hold off people of different races from being participants?’” he says. “No, it’s not malicious, but I think they’re answering a different question. Because I think it’s really hard to objectively look at the composition of boards and executive teams and say they’re well-representative of U.S. populations.”

Progress may be slow, but it’s still progress, he says, and employers need to look at the larger picture of cultivating diversity. “It’s not just diversity of race—it’s diversity of thought and perspective and background that allows companies to create products and services that are richer than the competition,” he says. W