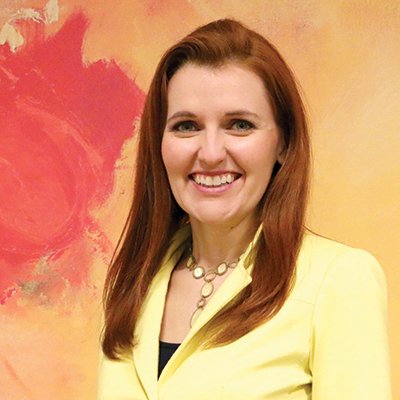 Amanda McGill Johnson Paves the Way for Women in Politics

Women who run for office win just as often as men do, according to former Nebraska State Senator Amanda McGill Johnson. But the first challenge lies in making the decision to run. “I was like a lot of women who might have the idea of running for office on their radar, but would never have said anything if my colleagues hadn’t approached me with the idea to run for state senate,” says Johnson, who represented District 26 in Lincoln for two terms, from 2007 to 2015.

Even running for office and losing isn’t necessarily bad, Johnson says. She campaigned as the Democratic Party’s candidate for Nebraska State Auditor in 2014, losing to Charlie Janssen, a Republican. “I learned and grew so much. I have zero regrets for taking on that endeavor. Overall it was a fabulous experience. Even though on paper I lost, things turned out well regardless,” Johnson says. “How could you ever regret building relationships and learning new things about your community?”

After term limits pushed her out of office at the legislature, Johnson accepted the position of district director for Congressman Brad Ashford. “I have a great job that I love, working with Congressman Ashford,” McGill Johnson says. “And it afforded me the opportunity to come back home.” She grew up in the Omaha area, graduating from Millard North High School in 1998. She and her husband, Clayton, live in Millard, and she is currently running for the Millard School Board. “I think we all have an instinct to want to go back to where we are from and give back to that community,” she says.

Johnson found her way into politics after first planning a career in broadcast journalism. She graduated from the University of Nebraska Lincoln with a bachelor’s degree in broadcasting and political science, and worked as a television reporter for KCAU in Sioux City, and then KOLN in Lincoln. “I wanted to cover politics at the national level; be like a Katie Couric or something, or maybe be a White House correspondent,” she says. But her ambition changed after two-and-a-half years. “I loved my job but I felt an inkling that there was something even better out there for me.”

She covered presidential politics leading into 2004, with opportunities to interview presidential candidates as they came through Sioux City before the Iowa Caucus. “In Lincoln it was a little less of that big national politics excitement, but I still enjoyed what I did—learning about the community and interviewing people on both sides of issues to try to get to where the truth is,” she says. “You see the best things in your community, like covering Make-a-Wish Foundation kids, but you also see the worst stuff when you’re covering things like murder trials. All of that led me to want to be more engaged politically, but you can’t really do that when you’re a reporter.”

In 2005, Johnson decided to leave broadcast journalism to work for the Nebraska Democratic Party as communications director, where she could play a more active political role. “Within the first six or seven months, though, I starting thinking that maybe that wasn’t the right fit for me,” she recalls. “I liked working for the candidates, but I began to realize I didn’t just want to be the person who was spinning things or attacking the other side. I wanted to actually work on the issues and find solutions to the issues. That’s the job of an elected official.” About that time, the seat opened on the state senate for a representative from the district where she lived in Lincoln.

“The best choices that I’ve ever made have been unexpected opportunities that popped up and being unafraid of seizing those opportunities,” she says.  “I loved being a state senator and the impact you can have.” After working with Congressman Ashford at the federal level, Johnson now believes state senators can have an even bigger impact on the daily lives of Nebraskans than Congress can. “When it comes to being able to make change in your community, the state legislature is one of the best places to do that,” she says.

Elected to the state senate at age 25, Johnson says being the youngest woman senator in Lincoln without a law degree was intimidating at first. “It took me a while to really feel comfortable and remind myself that every opinion is important. In crafting policy you need all perspectives. You don’t need to have a law degree or run a business or be retired,” she says. “A young single woman that has had the experience of a television reporter should be sharing those experiences and what she saw in the community.”

Timing and patience are key strategies Johnson utilized to create change while in the legislature. “You have to be aware of the community and what’s on people’s minds and where you think you can make the biggest impact,” she says. “You can’t make every change every year, so you have to practice patience. So much about getting things done is about timing.” She introduced a bill to provide assistance to kids aging out of foster care at a time when she knew senators were well-educated on the subject and understood the foster care system and the problems in it. “In other years, with a different group of people, you might have difficulty getting them to want to invest in those preventative services for kids in foster care,” she says. “I was able to get that done, and I think timing and the people there [in the legislature] had a lot to do with that.”

She is excited to see so many female candidates running for the legislature this year, but would love to see more minorities running for elected office as well. “Right now we don’t have enough minority representation in most of our elected boards and offices to make sure the unique experiences they have are being brought to the table,” Johnson says. “Nebraska has a growing Latino population, yet very few elected Latinos. I think that’s a tragedy for our system.”  She believes it is up to both political parties, as well as individuals with political experience, to recruit and encourage women and minorities to find the confidence within themselves to make that choice to run. W