Planting the Seeds for Positive Change 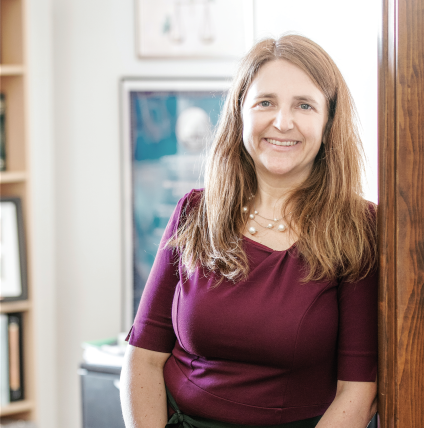 Ninety thousand. That’s the number of Nebraskans who fall into the Medicaid coverage gap. But these aren’t just Nebraskans: They’re friends, family members, neighbors and colleagues. People who are boxed out of our health care system, unable to obtain prescriptions or afford annual exams.

Were it not for a few true believers in democracy, we might never see an ounce of positive change regarding issues such as affordable health care. Thankfully, we have Nebraska Appleseed.

Becky Gould joined Nebraska Appleseed 15 years ago, when the 501c(3) nonprofit organization was much smaller. As a University of Nebraska College of Law graduate, Gould was the first full-time staff attorney the nonprofit hired. Initially, she worked on the economic justice program to address conditions of poverty and protect the rights of low-income Nebraskans. While she was planted in this position for six years, her role at Nebraska Appleseed grew into an interim executive director position and then executive director—a role she has now held for a decade.

“My favorite part is the strategy,” Gould says. “Figuring out how we use the skills and talents of our staff to really try and solve some of the hardest problems that are facing Nebraska.”

The Lincoln-based nonprofit fights for justice and opportunity for all Nebraskans, focusing on issues relating to economic justice, immigrants, health care and child welfare. To Gould, it’s all about creating a unified voice. “We are taking the tools and talents we have with lawyers, community organizers, people with public policy backgrounds and social workers, and we’re looking at what are the biggest problems facing low-income Nebraskans, kids in foster care and new immigrants. What can we do to address those problems in the most effective way?” Gould says.

Many of the problems in current focus relate to affordable health care for Nebraskans, including Medicaid. The most recent discussions on Medicaid have swirled around proposed cuts to the multi-billion dollar program. The changes could have a significant negative impact on thousands of Nebraskans, and its impact on women could be staggering.

Nationally, Medicaid provides coverage for almost one in five women, and in 2016 11 percent of Nebraska women between the ages of 19 and 64 were enrolled in Medicaid. Medicaid pays for half of all births and three-fourths of all public family planning services, and it provides supplemental coverage for one in five senior women enrolled in Medicare. Cuts in this coverage would leave a large number of Nebraska women unable to afford basic health care. “Losing health care could really upend a family situation,” Gould says.

Another major issue that could upend hundreds of Nebraska families is Deferred Action for Childhood Arrivals (DACA). The government program is set to expire on March 5, and if Congress does not act to put that program into law or come up with a solution, more than 3,000 Nebraskans will face deportation.

Because of the approaching DACA expiration date, this is a top priority for Appleseed. “It’s really counterproductive if we don’t solve this problem,” Gould says. “This would include people who are really contributing to our state in amazing ways and to lose that talent … would be a mistake.” There are many ways for average citizens to support and advocate for important issues such as the expiration of DACA and changes to Medicaid. While Nebraska Appleseed is largely grant-funded and there’s support from Nebraskans across the state, there is always room for another voice. Change really is possible, Gould says.

She urges people to develop a relationship with their policy makers, to volunteer their time, to help get the word out about an issue, participate in a phone bank or connect with their legislators. “Pick an issue you really care about and lend your voice to it,” Gould says. “The only way you get large-scale change is by getting people on the same page, brainstorming ways to fix it, and then taking that momentum up to the people who control that decision.”

The momentum doesn’t stop for Nebraska Appleseed. For 2018 and many years to come, it’s safe to say the nonprofit plans to continue planting seeds that aim to grow positive change from negative issues. W