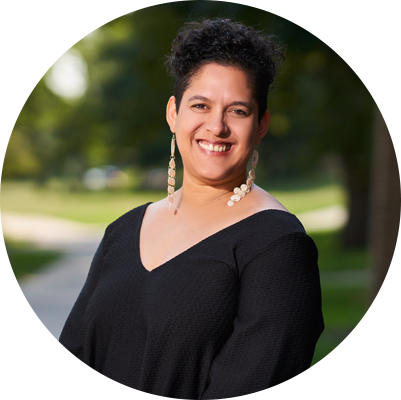 A Focus on Affordable Housing and Connectivity

Naomi Hattaway is an accomplished person who has held some impressive professional roles: director of communications and community initiatives for Front Porch Investments, a nonprofit focused on filling the affordable housing gap; founder of Leaving Well Consulting, which provides services for navigating transition and change; owner of 8th & Home Real Estate and Relocation; former program director for Habitat for Humanity of Omaha— and that’s naming just a few. She’s also the Women’s Fund Circles chair and has served on the Omaha Board of Realtors as well as several nonprofits. Hattaway even ran for Omaha City Council in 2021.

People are surprised to discover that Hattaway isn’t from a privileged environment, and that she doesn’t have a robust post-secondary educational experience.

“I think back to my life and if I had not taken that opportunity, all those tropes—single unwed mother, no high school diploma, no college degree—that could have let me lead a different life. Instead, I credit Omaha and organizations like the Women’s Fund for saying, ‘You have power and you have impact, and here are some opportunities to use it,’” she says. “I want to encourage folks to let their lives—as they are—fuel their interests and their impact, and their connection and their community-building.”

Hattaway’s parents are both from Omaha, but Hattaway’s early life was in the North Platte area due to her father’s work. The biracial family stood out in the rural community where her father was one of the first Black formally trained engineers for Union Pacific.

After one year of school, Hattaway’s parents pulled her out for homeschooling, which wasn’t recognized legally in Nebraska until 1984. It’s a conversation-starter, Hattaway says. “In Omaha everyone says, ‘What high school did you go to?’”

She had her first child at 18 and tried college, but the timing wasn’t right.

“Trying to balance multiple jobs and single parenting and college didn’t end up being the right balance,” she says. “I took about a year and a half of college classes but I never finished and I do not hold a degree.”

Hattaway went on to have two more children. “I feel like my oldest son, who will be 28 next year—he saw me as we grew up together,” she says. “He has a totally different experience than our youngest, who is 16. I’m older than most of her friends’ moms.”

Hattaway’s husband, Todd, is a former Marine who now works in the field of aviation. His work took the family to several states, along with an overseas stint in Asia.

As she raised a family, Hattaway also grew a career in what she calls community and belonging.

“If I zoom out, my role has always been to walk a middle line and bring people who might not otherwise be in community or in conversation together to get stuff done,” she says, adding that her diverse life experiences help her to relate to others even in a divisive time.

Much of Hattaway’s life work reflects a key issue of interest: affordable housing.

This fits perfectly with her current position as director of communications and community initiatives for Front Porch Investments, an intermediary between funding sources and those organizations that deliver impact in the realm of affordable housing and housing stability.

“We seek to braid and simplify finding sources to push that money out in loans and grants so that we can increase housing stock, increase supportive services for those seeking housing stability, and (seek) innovative ways to end homelessness and promote homeownership for those communities that have been oppressed like our Black and Brown neighbors—and all of it undergirded with advocacy and policy,” she says.

Hattaway has been a licensed Realtor since 2014. She founded 8th & Home Real Estate & Relocation the same year.

“I gravitated toward housing because I know what it meant for my family and for myself to have stable housing. We didn’t come from a tragic or traumatic housing story, but we moved a lot. I wanted to continue having home be someplace safe for my family; I was a Habitat for Humanity homeowner when I was 20,” she says. “Most of the work I’ve done as a Realtor has been working with households and individuals and families to say, ‘What is it you need? What does your neighborhood need to feel like? What do your kids need to feel like when they go to school?’ So, I’m not a traditional realtor. Now I don’t practice, but I do referrals and I match people to great realtors across the nation. That goes back to that connection piece, to make sure we all have what we need. That brings me joy.”

“My motivation to run came from the idea and the reality that our elected officials—and I don’t say elected ‘leaders’—don’t represent Omaha based on experience, makeup, ethnicity, background, all of the things that at the time did not effectively represent Omaha,” she says. “We ran an intentionally ‘slow’ campaign; we did not respond to anything before 48 hours had passed. We prioritized accessibility. We intentionally sought out renters who are registered voters. So, we did things a little bit differently. And we very intentionally brought affordable housing to the forefront.”

Although she did not secure a seat on the City Council, Hattaway’s campaign did help her form a new perspective on life. “As I creep toward 50, I feel so incredibly connected with the fact we spend so much time worrying about our reputation: ‘What are they going to think? How does what I do lend itself to my reputation?’ I have started detaching myself from that. I’m letting my actions be my reputation. And I wanted to raise my hand to show that it can be done in Omaha. We actually ended up with a record-breaking election cycle, we had more women running for that city council than had ever happened in Omaha, and I’m hoping that continues.”

“We’re not taking care of each other when we leave positions or roles or organizations; we leave in way that doesn’t set us up for success,” she says. “That comes from my years of moving and shifting and having several different jobs. I learned how important leaving well is, to be prepared for the next thing.”

Most of all, Hattaway wants to spread the word that degrees, titles and positions of power aren’t required for people to make a difference. “We don’t have to have a degree, or we don’t have to be invited to tables, or we don’t have to hold important titles to be part of a community or have impact. Your kitchen table is a platform,” she says. “Who you speak with and about what, and who you invite in, that is almost more important than having a microphone in your hand.”

“Honestly, I have not thought about what is next. I am very much enjoying my current opportunity. You just kind of ride that roller coaster of life. And sometimes it takes you places you never even thought about. That’s what I’ve tried to do with my life: be open to those opportunities.”