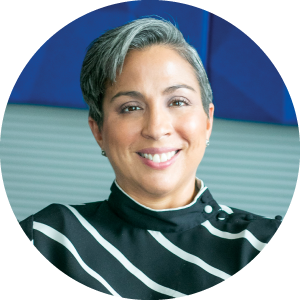 HARNESSING THE POWER OF EDUCATION

Great marketers know a little about a lot of things. That’s what Nannette Rodríguez tells people about her chosen career field. And she should know—her marketing career has taken her from entrepreneurship to corporate communication to higher education marketing—and nearly everything in between.

Born and raised in San Juan, Puerto Rico, Rodríguez knew by age 15 that she wanted to attend college in the states and earn a degree in advertising or broadcast journalism.

Fluent in both Spanish and English, she had parents who valued education. Her father was an attorney; her mother an entrepreneur. Her parents divorced when Rodríguez, the eldest of four, was five years old.

“I have no recollection of learning English, but my mother worked hard to afford a private school where they taught it. That is part of my privilege as a Latina—I am bilingual and have U.S. citizenship by birth.”

She also had an early sense for business and enjoyed discussions with her mother—a highly successful caterer—about how to estimate jobs, what and what not to bill for and other business-related topics.

Maybe that’s why, armed with both a bachelor’s in advertising and a master’s in corporate communication, Rodríguez opened her own business in Des Moines, Iowa, at age 21—offering graphic design, language translation and copywriting services.

“This is all pre-internet, of course, and there’s a certain acumen that comes with having had a business life and career before the internet,” she says. “Now everyone on Facebook and LinkedIn is suddenly a marketing professional, but it wasn’t always like that,” she says.

Her business, which specialized in Hispanic marketing, grew rapidly. But 11 years in, the economy shifted and a new opportunity arose. “It was 2008 and in our industry in Des Moines, folks were buying each other out. Our firm had worked with every other ad agency in the city, and agencies were looking to fill spaces where they had holes.”

Suddenly, Rodríguez had three offers in front of her. “I ended up selling my book of business to one of them and going to work for that firm.”

Part of her new role included business development and, after a while, she grew weary of ad agency life. “It became exhausting to me, trying to sort out who genuinely wants to do business with you and who just wants something for free,” she says. “That’s the problem with being in the business of producing products that are intellectual property—everyone wants agencies to provide speculative work up front, for free. No one would ask an architect to do that, yet agencies are asked to do it all the time.”

She worked for a time as a brand manager for an insurance company, and it was during this period that she met her wife, Tena Hahn, who was from Omaha and eventually brought Rodríguez here. The two have been together five years—married now for two—and are raising a teenage daughter, Josie, plus a foster daughter the couple calls their “bonus.”

“I didn’t have children, but I got Josie as a gift when she was 13,” Rodríguez says. “And now another daughter.”

A brief stint with a local bank solidified Rodríguez’s views on leadership—the most prevalent of which is that leaders need humility to be successful. “No one does it alone,” she says. “And the flip side of that is that everyone is a leader and contributing in some way. This is the common thread that runs through true leadership.”

Three years ago, Rodríguez accepted a position with Metropolitan Community College (MCC), where she is currently associate vice president for marketing, brand and communication.

“Everything I had ever done in my career was the greatest schooling for the role I’m in now,” she says. “I’m able to apply everything I’ve picked up along the way to my work here, and I get to be really close to how it impacts people for good.”

While she particularly enjoys feeling like she is making a difference in people’s lives, the position has also opened up her eyes to the power of education.

“Education is the largest disrupter of poverty,” she says. “That’s what makes MCC such a force. As a community college, we are positioned to market more strategically to people. We can spread the message that you don’t necessarily have to take the traditional four-year path. There is value in taking a more strategic way to a bachelor’s degree, and there is value in an associate degree that leads to careers in areas like the trades.”

She says she realizes now that the idea that you must have a bachelor’s degree to apply for a position is a form of discrimination. “This means that if you don’t have the right access, or the knowledge on how to gain access, you’re automatically at a disadvantage.”

Looking back on all of the years she has hired and managed people, Rodríguez says some of her best employees have had associate degrees or been self-taught. “I’m the product of a four-year path, but had I understood the value of community college back then the way I do now, I’d have done things differently,” she says.

Lessons learned, she says, and applies this to her personal life as well. Early on in her adult life, Rodríguez was married to a man she met in college. “There are many women who marry men because that’s what society tells us to do,” she says. “I married my best friend, who was a really good guy, but also, as it turned out, happened to be gay. We had what is called a ‘Lavender Marriage.’ I found out when I happened upon his gay.com profile, and the rest is history.”

The betrayal that he was seeing someone outside the marriage stung, but this also presented Rodríguez with a chance to start over. “I had a clean slate—I could be who I’ve always been,” she says, adding she only dated women after her divorce.

The road forward was bumpy and included an abusive relationship with a woman who was a highly functioning meth addict. “I tried to help her—I did all of the things a good partner is supposed to do—but I didn’t understand how insidious that drug was,” Rodríguez says. “One of the lessons I took from the experience is that bad things do happen to good people.”

Rodríguez shares this story because she wants people to know that domestic violence happens in same-sex relationships, and to people from all walks of life. “It happens to highly educated people. To highly aware people. You become a product of the situation your abuser traps you in,” she says.

With all of that in the past and the right person beside her, Rodríguez is now enjoying the best days of her life.

“Tena helps me to forgive myself, to be kinder to myself,” she says. “You know it’s your person because they make you a better person. That’s what I have with Tena. That’s what we have together.” W