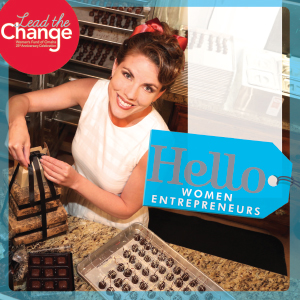 How does anyone ever really know if they have the moxie to start their own business? After Melissa Stephen’s cordial cherries were listed on Oprah’s 2013 List of Favorite things, her business naturally skyrocketed.

At the height of her Oprah fame during the busy holiday season, Stephens had to delay opening her store so that she could make enough product to sell. She opened the door at 3 p.m. to find an entire courtyard filled with customers anxiously waiting to purchase her delectable chocolates. “Then there’s this guy with this baby running. It was like something you’d see in a movie,” she says. The Cordial Cherry had built a reputation for selling out.

Her own business started quite innocently and almost by mistake. It was an afterthought, really. Stephens was student-teaching at Northwest High School while working on her doctorate. As a way to become more involved, she signed up for a booth at a spring bi-annual fundraising craft show.

What could she sell? Her Grandma Sheldon had taught Stephens how to make cordial cherries when she was little. Using grandma’s recipe, Stephens whipped up a batch. She had the idea to decorate one of the cherries to look like a tuxedo. “I’m up there late at night making this little cordial cherry to look like a tuxedo. I got done and I was like ‘Gosh, that’s kind of cute.’ I don’t know what I’m going to do with it, but it’s cute,” Stephens says.

“Everybody was going nuts over this tuxedo cherry.” Although she couldn’t sell it, it was the spark that created her business. She came up with more designs. By the time the Fall craft show rolled around, she also decorated cherries like Christmas trees and reindeers. She sold out in a few hours.

Sheldon with planting the idea after her grandma visited a show and witnessed the cherries’ success first-hand. “She said, ‘Missy, you’re going to be big some day.’ She saw how excited everybody got.”

Stephens, whose customer base is 95 percent women, noticed that many were approaching her with questions about how to start their own businesses. “How did I get started? How did I pay for things? How did I come up with the idea? It was incredible how many women were interested but for whatever reason didn’t take the next step,” Stephens says. Eventually Stephens decided there had to be a way she could help out. So she opened Stories Coffeehouse near 180th and Pacific. It is a beautiful, yet cozy spot offering the gamut of coffee beverages—from lattes to espressos with tasty treats to nosh on. “It was a chance for them to see if it’s something they want to do long-term and in a relatively safe environment.”

Stephens gave business-owners a chance to rent commercial kitchen equipment and display space as long as they signed a year-long agreement. The rent depends on how much time and space the occupant is using, as opposed to 24 hours a day, seven days a week. “The idea is that the costs are spread out among multiple business owners.”

Stephens says that new business owners put a lot on the line. “You’re just hoping that your idea takes off and if it doesn’t, you’re stuck with an awful lot of debt and probably an awful lot of regret.”

Stephens considers herself an artist first, who taught herself chocolate. “I have an eye for design and art. I love making things. I’m an avid seamstress. I love to build things. I lay tile.”

With Stories Coffeehouse, Stephens created an inviting environment. “The décor, the music, the whole feel, the furniture. It is everything that Stories is. That was where my talent came in.”

She found prospective business owners and mentored them on a weekly basis. “I would meet with them individually to help them with their websites.”

One such businesswoman was Amber Christ of the readyto- bake meal service, Homemade by Amber. “We are learning a lot. There are a lot of things you don’t know about a small business until you’re behind the driver’s seat, so we’re learning as we go,” Christ says.

Christ, a former accountant, realized that life is too short after losing both her mother and aunt to cancer. She didn’t love her job and it became the impetus for starting her own business. She benefitted from professional guidance by Stephens.

Things went so well that Christ bought Stories from Stephens just over a year ago. Christ has, in turn, helped the businesses figure out how to market their products. “It’s how to catch the consumer’s eye and really branding yourself so that people see your logo. It’s really fun because we’ve all learned together,” Christ says.

“At any given time, we have six to seven small businesses together. They have either learned the hard way or the successful way. They can really help to mentor and coach one another.”

Thanks Jennifer and Debra for the great story….both of you are so lovely and I couldn’t be more grateful!