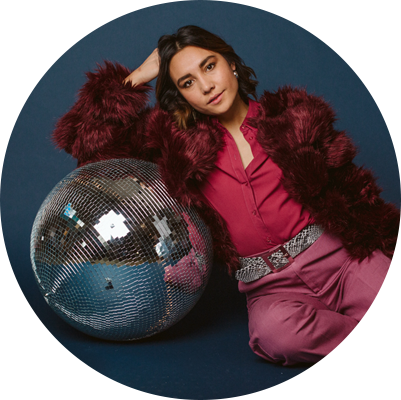 Starting Conversations and Inspiring Advocacy for Her Generation

In 2016, before graduating from Creighton University’s school of journalism, Maria E. Corpuz was selected for a two-week backpack journalism trip to Nogales, a border town—split by a wall—between Arizona and Mexico.

“I had a chance to talk to migrants who were just deported, because we worked with Kino Border Initiative. They have a soup kitchen and a women-and-children home system for people who have recently been migrated,” Corpuz says. “A huge percentage of the people who get deported in Nogales are not from there; they’re from Honduras, they’re from Guatemala, they’re from other parts of Mexico. When they get deported, they’re being preyed upon by gang violence, the drug cartels and the police.”

The experience was “phenomenal” and “activating,” Corpuz says, but heartbreaking at the same time. She saw people enter the courtroom in shackles, facing barriers to justice from scanty legal representation to limited education and a language barrier.

“It was very eye-opening for me,” she says, adding that, as “one of two Brown people on the trip,” it also brought up memories of her own experiences with racism. Corpuz has Filipino ancestry but says she is commonly assumed to be of Mexican descent and has been the target of microaggressions or outright racial slurs under that assumption. Sometimes, when people would find out she is actually Asian, “They’d change their racism.”

Corpuz is proud of her heritage. Her Facebook profile features a photo of her with her grandmother.

“I spend a lot of time really digging into my own ancestral history,” she says. “My lola—which is Tagalog for ‘grandmother’—she was born in 1927, so she just turned 95 this year. She grew up in the Philippines and didn’t move here until 1968. It’s been really interesting to have these conversations, because a lot of the education she got was from U.S. history courses and so a lot of the Filipino history has been lost. I think that really motivates me in my advocacy work particularly, and storytelling, because stories of my ancestors are so hard to find. Reconnecting to them allows me to heal some of that ancestral trauma and have more empathy for other groups who are currently facing the same tragedies that my people faced.”

She says the Nogales trip helped inspire her activism.

“It felt like a very impactful time to see what I could do in Omaha,” she says. “Since then, I’ve been trying to figure out ways to get involved at a local level in Omaha—whether it’s with immigration or women’s rights. I wouldn’t say there is any particular lane that I stay in.”

She’s been a panelist for Omaha Table Talk in a conversation about the Asian American and Pacific Islander community. She’s written for NOISE Omaha (North Omaha Information Support Everyone), a news media source focused on north Omaha, and Mug.News, which features Midwest startups, entrepreneurs and tech companies. And she’s recently been invited to be a “Riverside Chats” guest host on KIOS, Omaha’s NPR station.

“I’m so excited to get to do that because of my love for storytelling and getting to ask questions to experts in their field, to hopefully educate the wider community of Omaha,” she says.

When covering political news for NOISE, Corpuz became interested in helping others make connections and get involved.

“I was writing a story and read that Millennials were the most diverse and most liberal but were the least likely to vote. That really hit me,” she says. “I realized that a lot of us, a lot of Millennials that I know, were super-passionate about specific things, but we don’t really know the process and we really don’t know who to reach out to in order to get that information and how to participate. It wasn’t really laid out to us besides, ‘Vote.’”

“I wanted a way to talk about issues and stay in conversation. I think a lot of times when we try to have conversation with folks who don’t agree with us, sometimes our anxiety and frustration can block our communication. I wanted a platform in which people who were experts on specific topics and from multiple points of view could come together and talk about something that you can learn from,” she says. “I wanted a conversation space.”

Corpuz says she wanted “Nite Caps” to help educate people about the facts of various issues but also demonstrate how to participate in the community effectively and even how to engage in civil discourse. Rather than allowing a heavy or contentious tone, she strived to keep the conversation productive and even lighthearted at times.

“We’ve covered sustainability, we’ve covered transportation in Omaha, we’ve covered sex education around the world,” she says, adding that hosting “Nite Caps” helped enhance her own interpersonal communication. “Conversation really is a skill, and when you get into the hard conversations, that skill set really needs to be sturdy and strong.”

“Nite Caps” also featured artists, not just showing their work or performing, but participating in the conversation, Corpuz says.

“My biggest passion in Omaha is probably the arts and music scene here. All of my friends are either artists, dancers or musicians and being able to support their work always brings me so much joy. I believe leaving a space feeling refreshed is really important, and art really does that for communities.”

“Nite Caps” took place at OutrSpaces, a membership-based rehearsal and performance space in south Omaha that closed during the COVID-19 pandemic. Corpuz says she hopes to resurrect “Nite Caps,” possibly in the form of a podcast.

Professionally, Corpuz serves as a VP of sales for Peeq, a woman-owned, Omaha-based eyelid/skin-care products company started by two optometrists. She also works for Chapman and Company as a consultant, aiding entrepreneurs with marketing, sales, research and funding. Corpuz’s background also includes modeling and acting, mostly serving as a spokesperson.

“I’ve done some YouTube tutorials, I’ve done commercials, I’ve done music videos,” she says, adding that she’s also modeled for friends who own small businesses. As a kid, she was featured in marketing for the Catholic schools she attended and in radio commercials for her father’s dental practice.

Corpuz is equally comfortable in a live format. Besides “Nite Caps,” she has hosted events or activities for several nonprofits and art organizations and would be interested in hosting events full time if the availability existed.

“That’s my favorite thing to do, get people excited for sharing space and sharing community around whatever the event or fundraiser is,” she says.