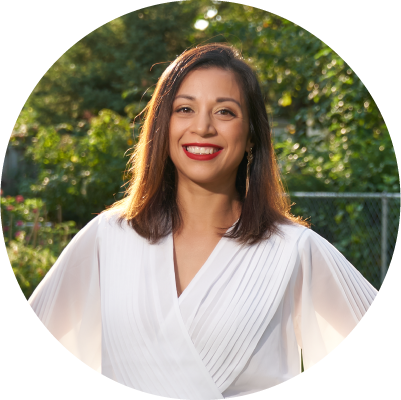 On a Mission to Elevate the Community

Lucia Pedroza never thought that being active in politics and leading the community was something she could do.

Pedroza’s family experienced real and present danger in their native country, Guatemala, when her mother witnessed a violent crime and the family came under threat from the perpetrator, the victim’s family, and the authorities. They fled across the border 21 years ago, hoping to gain asylum in the U.S. It was a long process, but Pedroza finally obtained her Green Card and has been here ever since.

They landed in Nebraska, and Pedroza says she moved around a lot after high school. “I wasn’t documented, so I really didn’t feel like I had many choices for my future at the time.”

Growing up in a different country from where she was born made Pedroza grow up quickly. She says she missed out on normal childhood experiences, including making childhood friends. “I don’t wish that on other people, that’s why I take my role very seriously and why I do things for generations to come. I think that perspective really makes me strong.”

For the past decade, Pedroza has settled in Omaha. She is raising her family here and has found her true vocation: working with advocacy and nonprofit civic engagement groups. Living in Omaha gave Pedroza and her family the roots and community they needed to feel supported and nurtured.

She has served on the Boards of Directors for the Nebraska Civic Engagement Table, Women’s Fund of Omaha and Survivors Rising, and is currently working on a Sociology degree from Hastings College. By focusing on families and inequality in her education, she is redefining for herself what it means to be an immigrant in this country. “What I have learned is our experiences are valid, but they don’t define us,” she says. “I am not just one thing. I was ashamed to say that I was an immigrant because I’d been made to believe that as a child I broke the law, that I was a criminal for being here, that I didn’t belong. I had to learn that is not the story of who I am, that I have power and that I didn’t come to this country to take power away from you. I am here to contribute to the collective power we all have.”

Her new position as Elevate Omaha’s Advocacy and Grantmaking Director allows her to utilize this passion at work. In her role with young people she supports their advocacy efforts, acts as a connector to other advocacy groups and elected officials, and develops a grantmaking process that is accessible and strategies that are youth-led.

She wants to give real power to youth voices across Omaha and believes her organization is making a difference. “Young people may be involved in other organizations as part of focus groups or as participants of their programs, but this doesn’t translate to real power for people. What we are trying to do at Elevate Omaha is not to lead for them but to support their efforts, support their ideas to make sure that they are gaining that power in Omaha,” she says.

Pedroza is familiar with empowering work. A previous nonprofit position gave her the opportunity to advocate for DACA recipients to be eligible for driver’s licenses. The bill was passed by the State Legislature and became law in 2015—a huge victory for advocates.

At one point a few years ago Pedroza stepped away from advocacy work, recognizing she needed to prioritize self care. “I had come to that point that you can only ‘fake it ‘til you make it’ for so long,” she says. “All my trauma and everything came to a point where I had to get off the hamster wheel I was on and step back and take care of myself.”

However, it wasn’t long before Pedroza’s copulsion to serve her community was back. When a young man lost his life at a protest, she felt she could no longer stay on the sidelines.

“Leaving the hamster wheel and being open to something new really changed me and challenged my view of what my role is for racial justice and how I can be an ally,” she says. She wanted to get involved in the community again, to support others and offer herself as a resource. “It was about being in solidarity. Thanks to the fact that I took time out to care for myself emotionally and mentally, I was able to make that decision from a place of love and follow my intuition.”