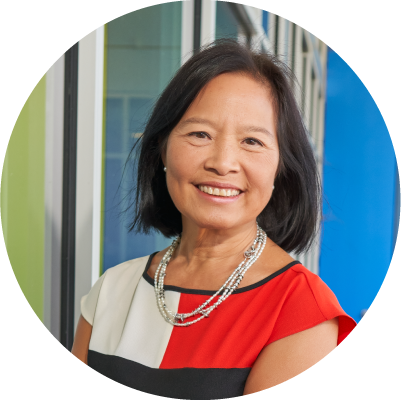 Lorraine Chang has always had a passion for public service, but the March 2021 massage spa killings of Asian women in Atlanta triggered an unknown nerve. Since then, she’s been using her voice to advocate for allyship rather than bystandership in response to ongoing Asian American and Pacific Is lander (AAPI) hate.

“It took me a few days to figure out what it was that was triggered by that event in my mind and in my gut,” Chang says.

“I remembered in my past growing up, the sexualization, fetishization and misogyny that was directed at me as an Asian woman had really followed me through my entire life until I was married.”

She had not realized she was living in a culture that normalized the discrimination of Asian Americans, more specifically Asian American women, through media, movies, etc. Furthermore, Chang says the events in Atlanta awakened her self-identity and motivated her to use her voice as a proud Asian American woman.

Through shared life experiences with coauthor and Vietnamese American Krystal Vuong Wegner, as well as support from the Women’s Fund, the two joined efforts to publish an op-ed on April 30, 2021 for the Omaha World- Herald titled “Midland Voices: Asian Americans have been ‘invisible,’ as has racism against them” to advocate on behalf of the Asian-American community.

“We tried so hard in our lives to assimilate that we were taught to not make waves and to go along to get along to be the model minority,” Chang says. “Wegner and I are generations apart, yet our experiences are so similar.”

Following the success of the op-ed, Chang received a piece of hate mail that read “Thanks China for killing our families and friends.”

“I never thought it would happen to me,” Chang says. “I had been advocating for other people who had suffered anti-Asian hate, but never thinking I would be targeted.”

Chang says with the new experience, she also developed a new perspective on discriminative behaviors and its affects on people. She further used her voice for advocacy by contacting the Anti-Defamation League (ADL), which is tracking hate crimes in Omaha.

“Now I know personally how much it affected me and makes me even more passionate to get this message out,” Chang says. “The behavior is not acceptable, and my purpose was to assure this would never happen to someone else.”

After learning that other condo residents had received hate mail, Chang successfully encouraged the board of her condo association to pass a no-hate resolution as well as support an educational workshop offered by the ADL. The workshop occurred in September and resulted in a positive turnout, feedback and support.

“The group is focusing on education,” Chang says. “Most people are not aware of microaggressions and bias they hold, so what could we do to educate people more?”

Chang wanted to echo the importance of education on the current AAPI issues, and as a result, Inclusive Communities sponsored the programming of online sessions in May and June that featured panelists from the newly founded Asian-American community, Nebraska Asian-American Leadership Alliance (NAALA). The sessions were well received and will continue to occur quarterly through the Inclusive Communities Omaha Table Talk program.

Through connections with ADL, Chang’s courageous voice further earned her the opportunity to testify in front of both the City Council and the Douglas County Board to support mayor Jean Stothert’s anti-hate resolution as well as the declaration of May 2021 as Asian American-Pacific Islander Heritage Month.

“It’s been an opportunity for me to really connect with my Chinese-American, Asian heritage and to use my voice to ensure that everyone is treated with respect,” Chang says. “And that our community is more informed about the contributions that Asian communities have been making nationally and locally to appreciate Asian American history that is not really taught in schools.”

In response to the pandemic, the Learning Community Foundation held a campaign that raised money for diapers, wipes and formula and resulted in support of 200 families. Chang’s involvement has given her the opportunity to grow advocacy skills as a public official.

“We have to set the ground rule and make sure that those who don’t want to abide by it are held accountable,” Chang says. “We have to be vocal and stand up for what we believe even more so now than we had to five years ago.”

It’s also critical to support one another and continue to raise awareness of these issues, she says. “Now I know what that really means when you are surrounded by supporters who want to stand with you, and it really makes everything OK,” Chang says. “Because I had support from the people in my building where I live, this new group of Asian Americans in the community and the Women’s Fund, it has enabled me to get past that trauma.”

She says allyship is a powerful force and that she has developed an even deeper appreciation for its ability to defeat bullying and hate. “That’s the key for me,” Chang says. “No one should have to go through what I went through, so it’s something I have to stand up for to show that it’s happening right here in Omaha too.”

From Washington D.C. in 1994 with the establishment of Asian American Government Executive Network (AA-GEN), to the recent advocacies in Omaha in 2021, Chang’s contributions for change and justice are ongoing, and she encourages both bystanders and allies to use their voices and to encourage others.

“People have stepped up, used their voices and been allies with each other,” Chang says. “That’s what it’s about and it feels good.”